When the stars (and sequences) align

I successfully completed my genome preparation in Bismark yesterday, so I started on my sequence alignment. Based on the Bismark manual and Steven’s lab notebook post, I used the following parameters in my Jupyter notebook:

The Bismark run was completed for each file, but I did end up with a gunzip error for each of my files:

I’m not entirely sure what this means, so I opened a new issue. Once I fix this gunzip problem, I can move on to the methylation extraction and start to analyze all of the .bam files this alignment step produced!

from the responsible grad student https://ift.tt/2jcgPIa
via IFTTT 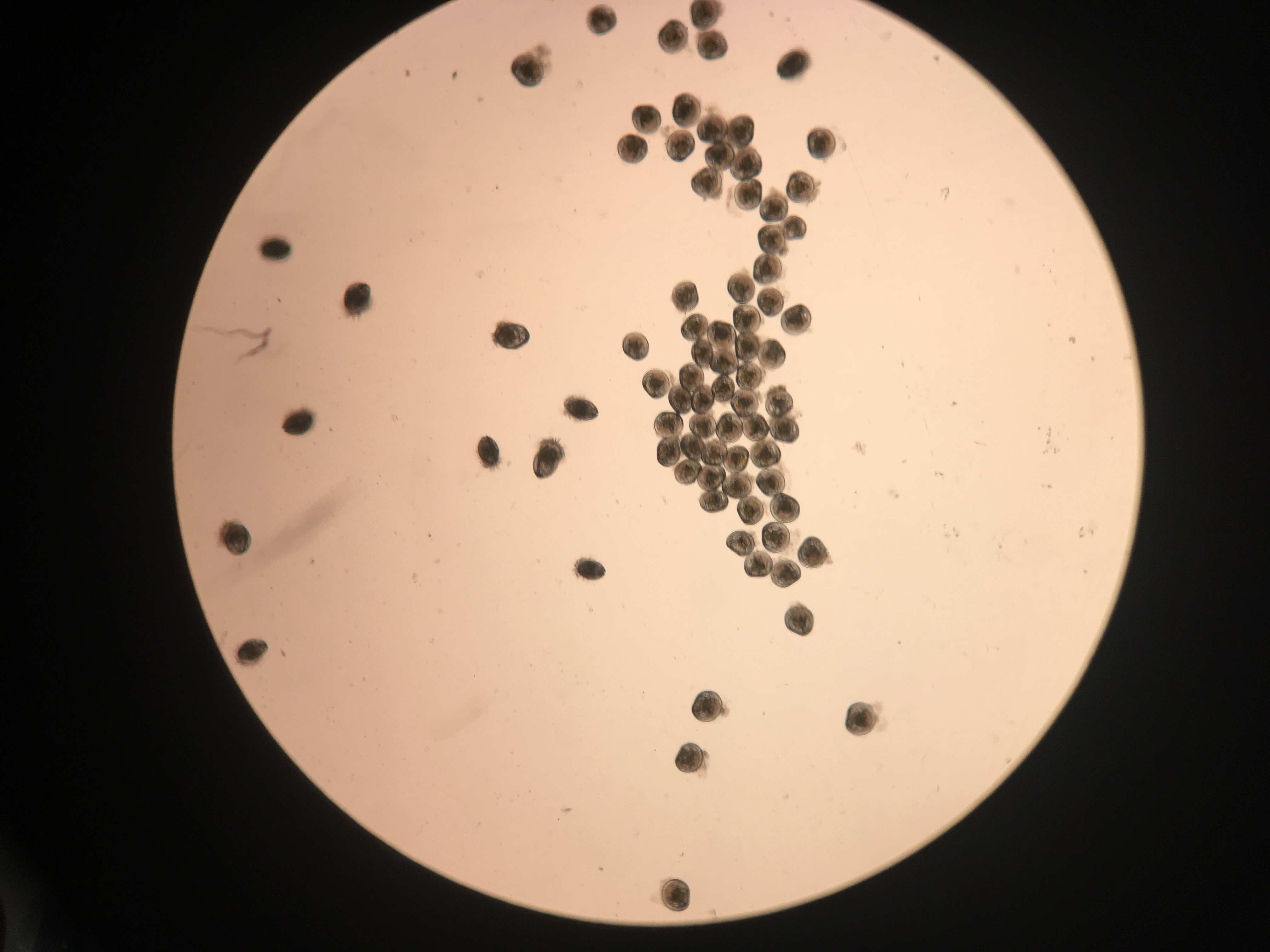 Larval production data are in! It’s been 1 month of collecting and counting larvae released from four broodstock treatments, held for 3 months at the following, then induced to spawn under common conditions – 18C, food ad libitum. 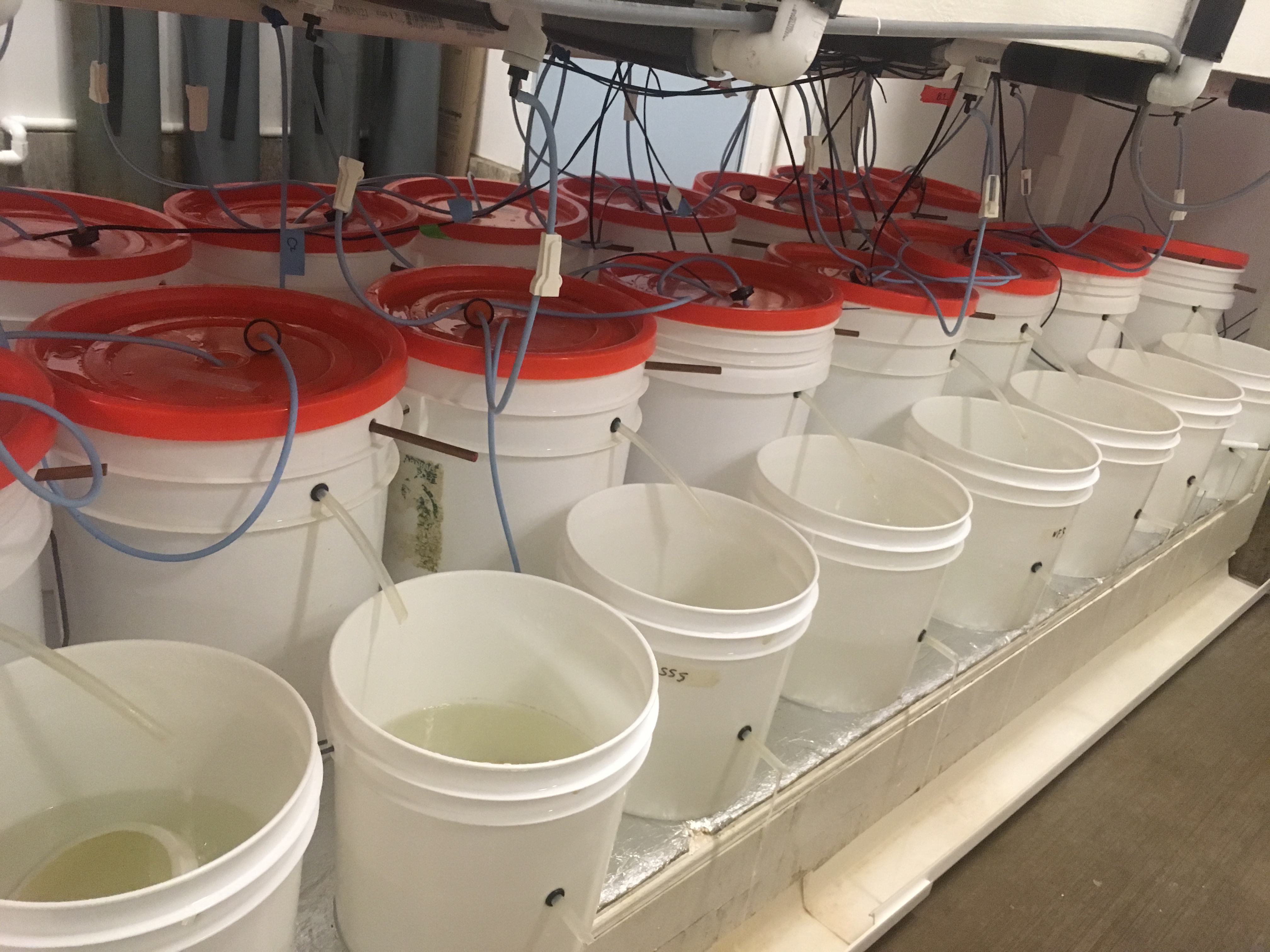 The following plot shows cumulative larvae released over time for the four treatment groups, with four replicate spawning buckets per group. Number of released larvae have been normalized by the total oyster volume (measured via volume displacement). Total production does not appear to be influenced by treatment, but timing was. This is consistent with my results from last year’s project; see 2017 spawning charts. It’s interesting to see that, within temperature treatment, the low food groups spawned first, and that the limited feeding levels over winter did not significantly effect larval production.

Here is the total larval production data for each treatment/rep. Note, A1 and A2 (etc.) designate broodstock treatment tank reps 1, and 2 which I subsequently split into four total spawning buckets.

Here is the raw larval production data for a better idea of timing, and cells highlighted in blue indicate dates that I visually observed sperm/spawning activity via froth in the larval collection bucket (as shown in the middle bucket in the below image). On some days a few groups released larvae and spawned on the same day. 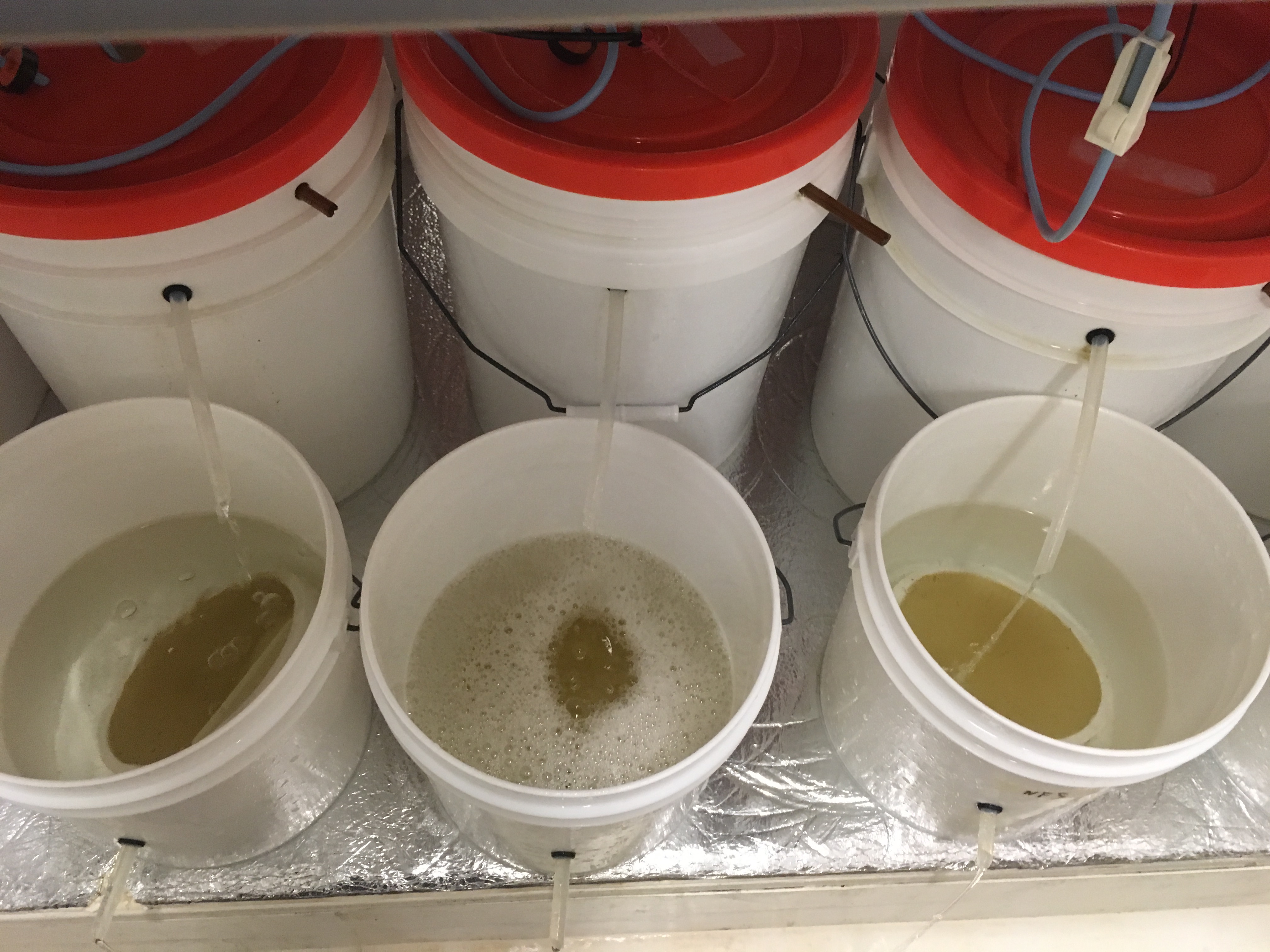 Every day I collected larvae, I preserved samples in the -80. Samples were collected from 3/30-4/6 via killing with ethanol, transferring to 2mL microcentrifuge tube, then rinsing with ethanol to remove seawater, centrifuging for 1 min @ 2000g, and discarded supernatant. Then, I determiend that ethanol may interfere/remove some lipid content, so I altered the protocol to: rinse larvae with only DI water into microcentrifuge tubes, discarding DI supernatant, then into -80 immediately. Larvae are likely still alive upon transferring to freezer; the DI water simply causes them to close and sink, allowing for removal of supernatant. I preserved a total of 155 separate daily larval samples (with 2 or 3 reps for most). Plan is to look at lipid content and shell size. 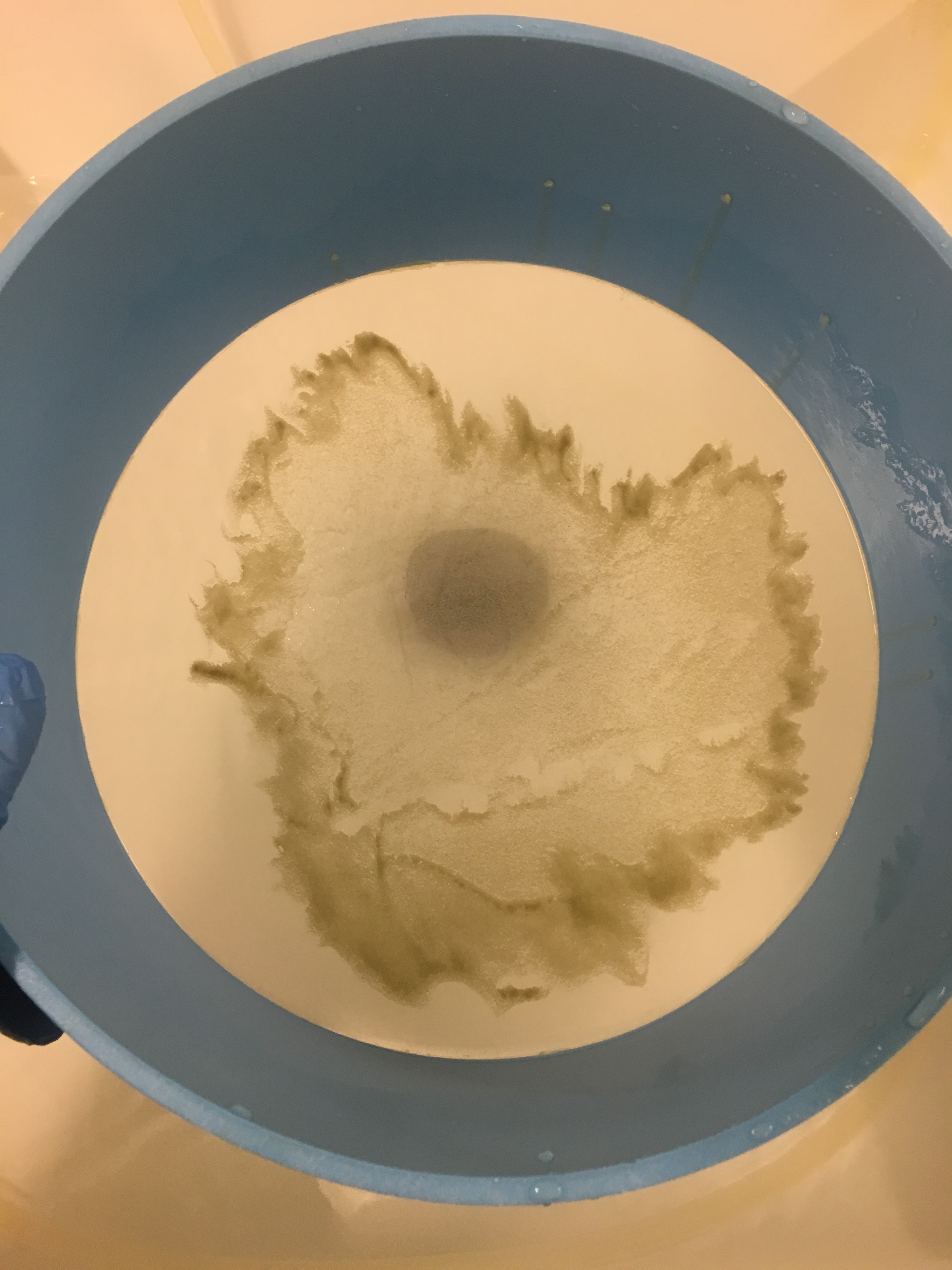 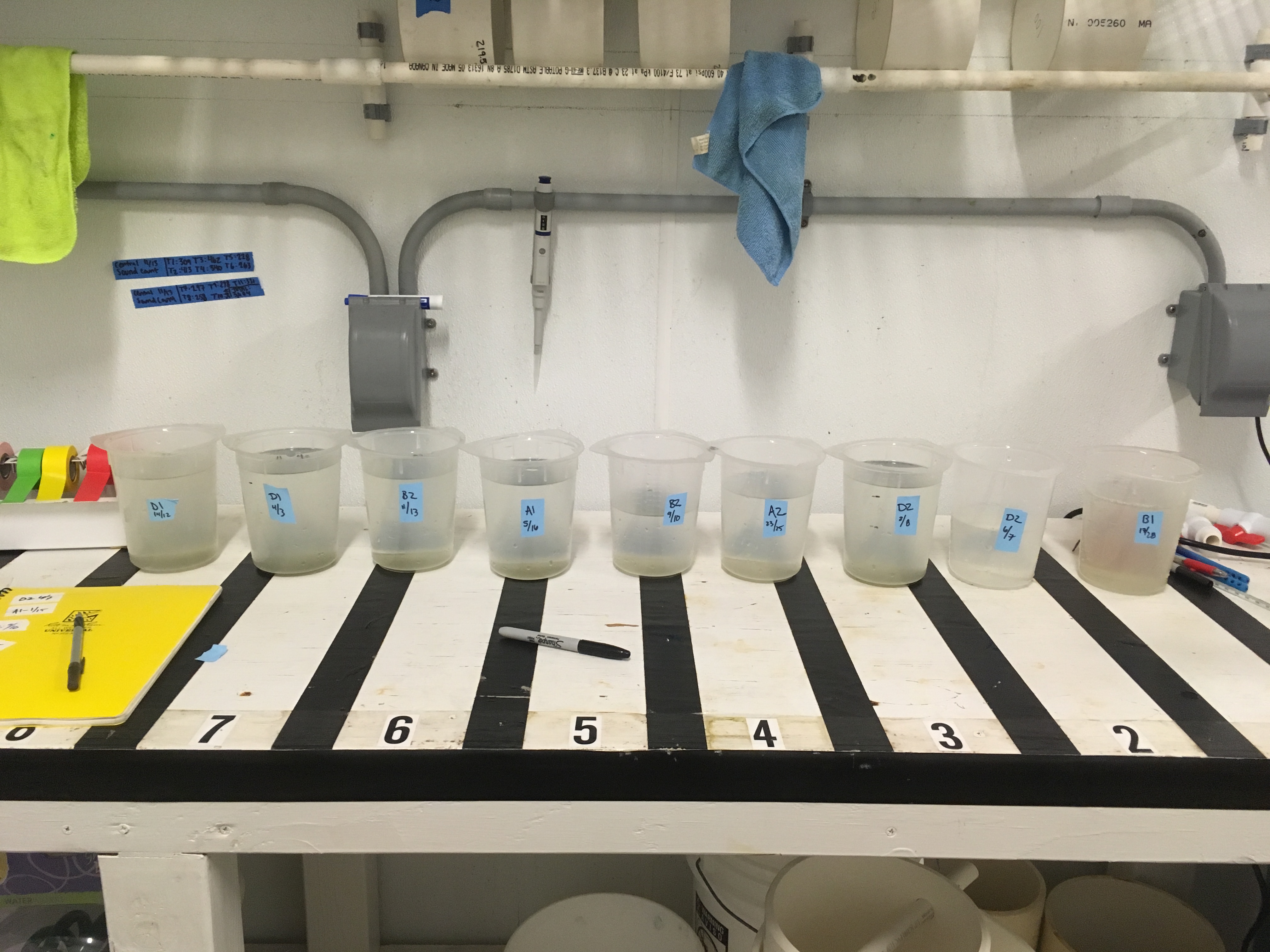 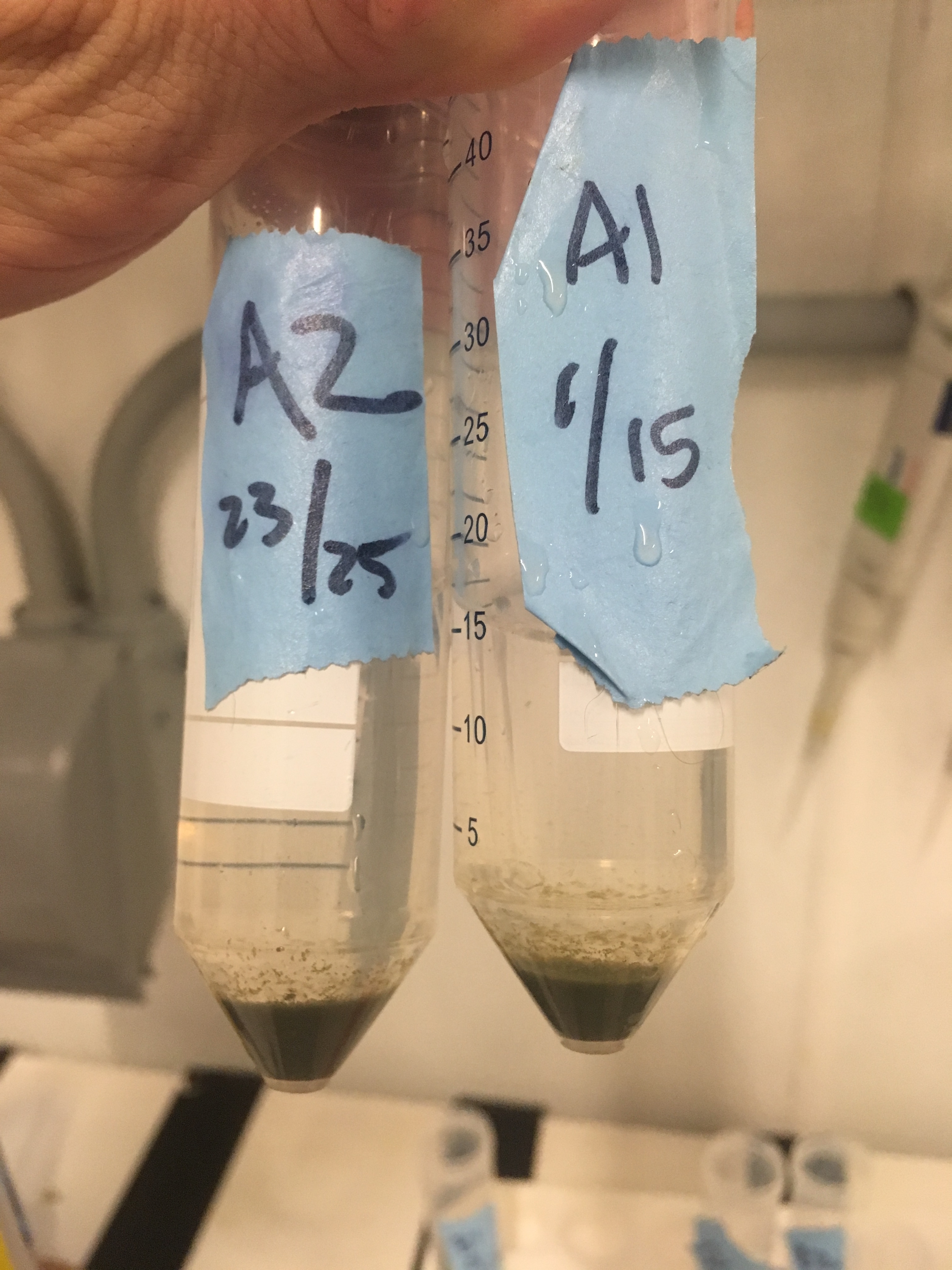 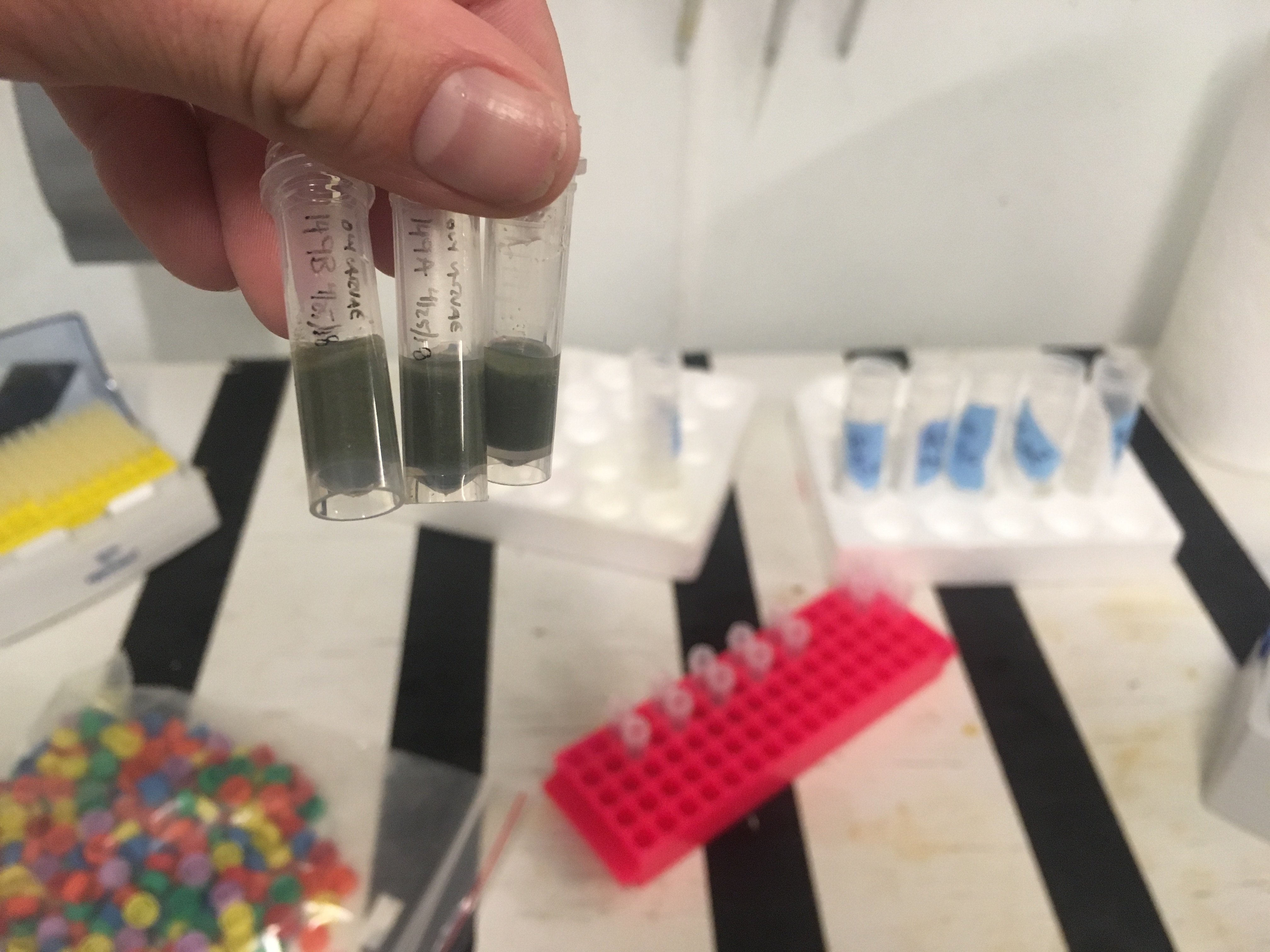 To assess larval viability, I am rearing 12 families per broodstock treatment, 3 reps per family. I’ve stocked mini-silos with ~800 larvae. A family represents a subsample from one day of larval production from a bucket (must have spawned >100k larvae). Families were not stocked using two sequential release days from the same bucket, since I often observe larvae collected from the same bucket two days in a row (likely due to slow trickle/flow of larvae into catchment buckets). At week 2 post release, I rinse silos with fresh water, then sprinkle 0.5mL 224uM microcultch into each. When postset are 6 weeks old I will count survival and image for size. 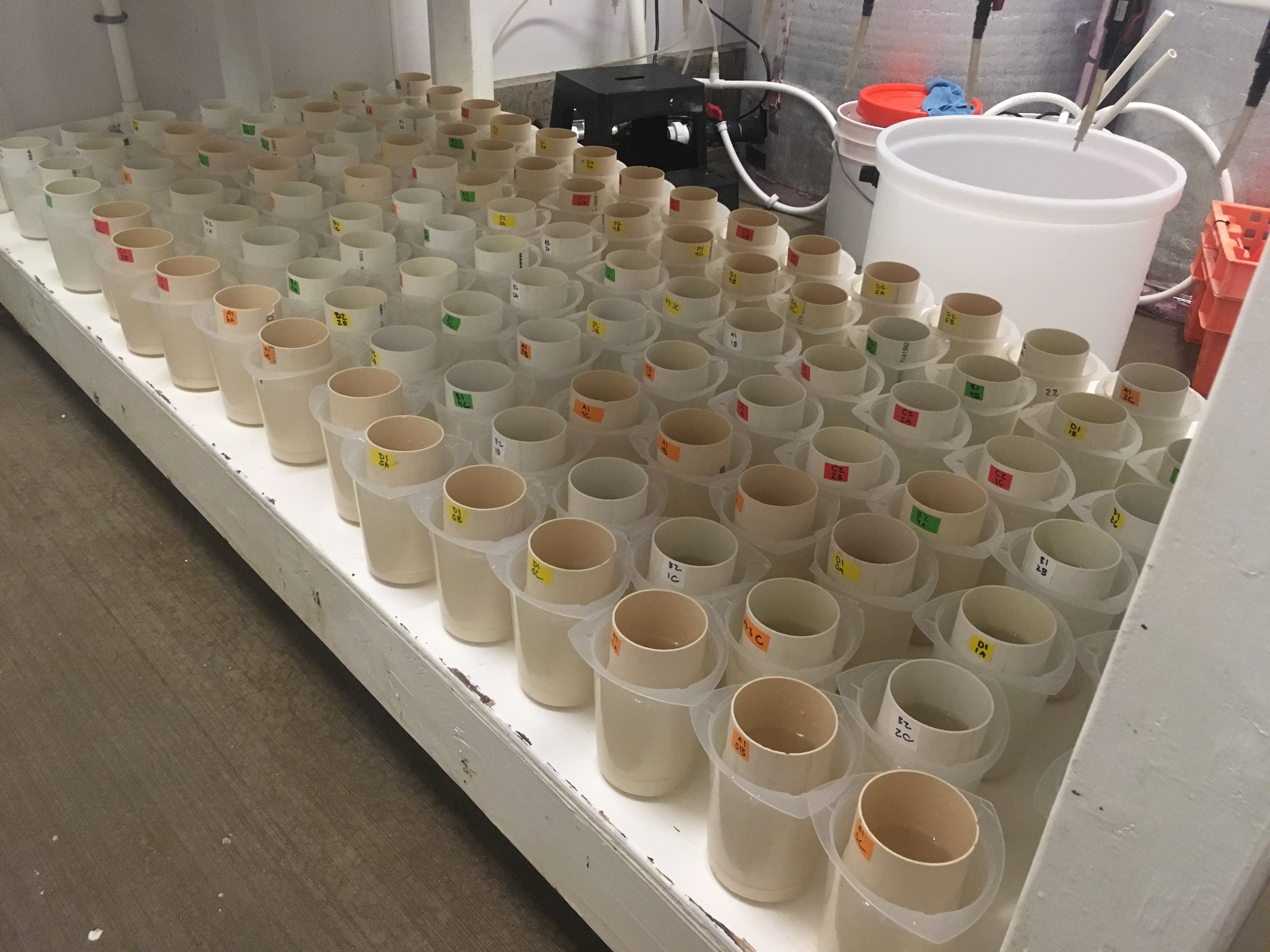 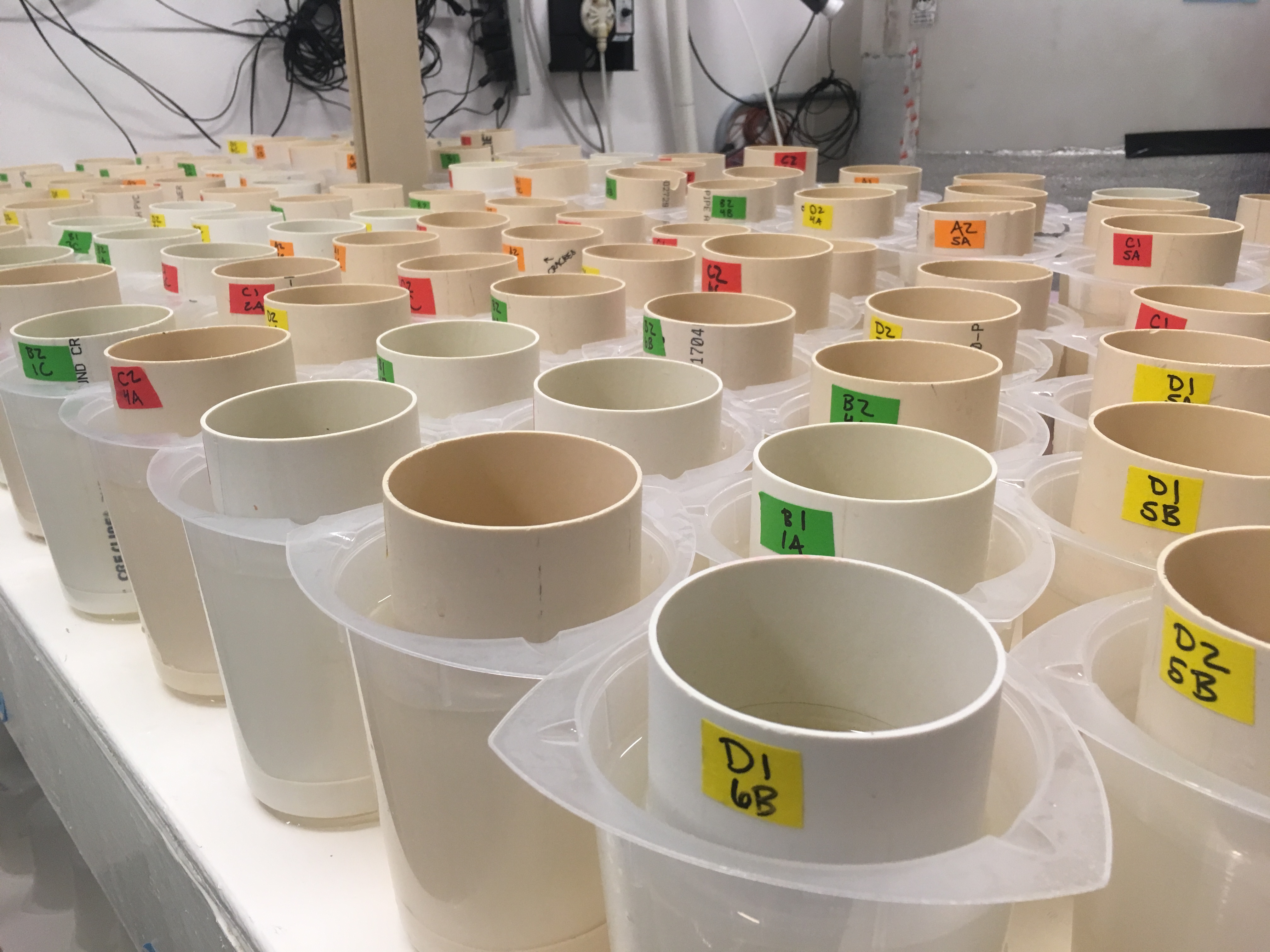 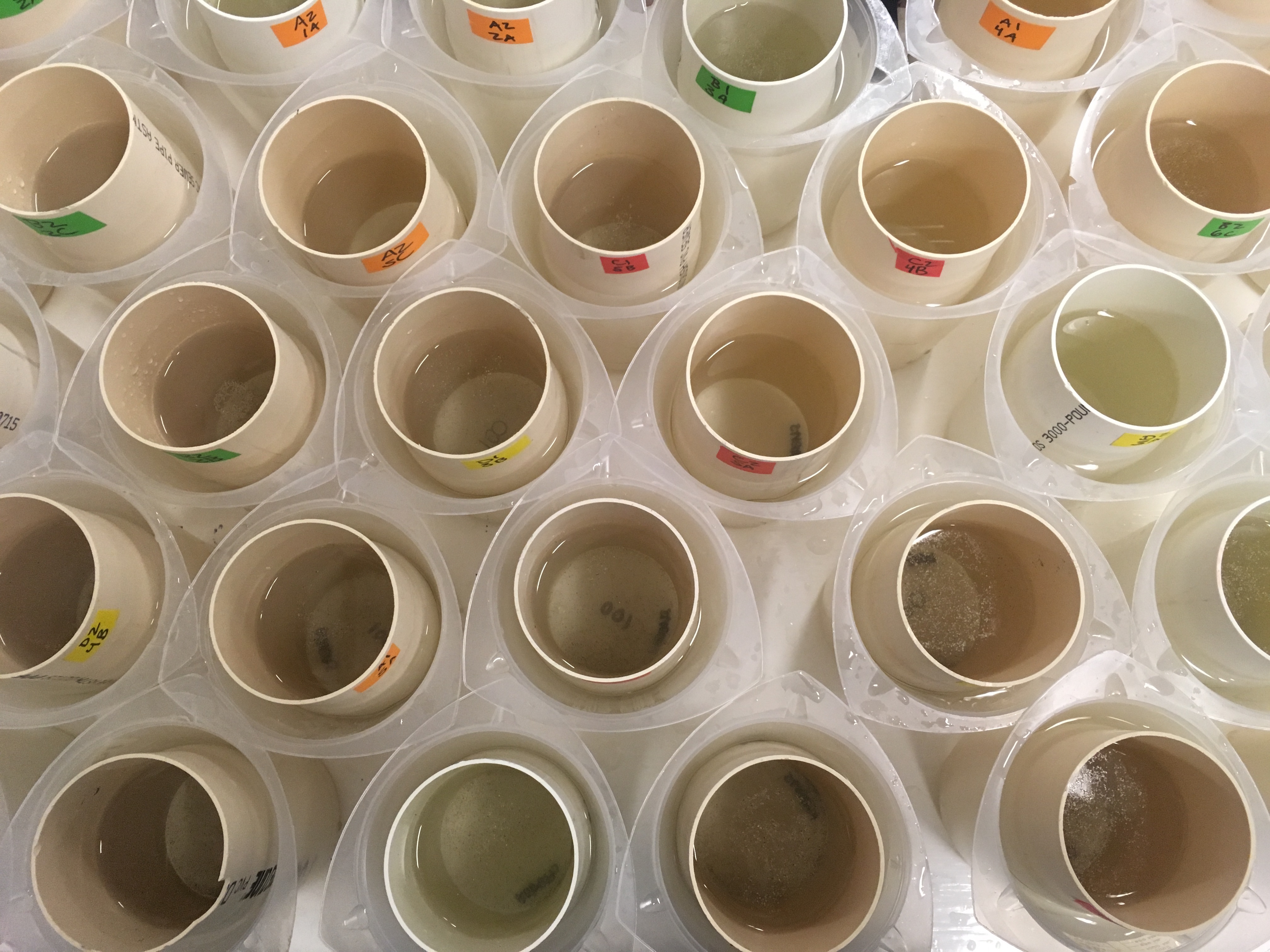 Daily water changes are performed for the first 3 weeks for larval rearing mini-silo. Water changes include: collect 1L each diatom (CM) and flagellate (609) from the algae carboys (to ensure algae is void of ciliates), dilute with 6-8L FSW and count subsamples to determine algae concentration. Then, mix 30 gallons FSW + algae mix (determined via the below equation) for a 100,000 cells/mL medium. Fill tripours with 800mL mix, and transfer silos to new medium. At 3 weeks, water changes move to every other day. At week 6 I will move larvae into nylon mesh patches made from 450uM screen. 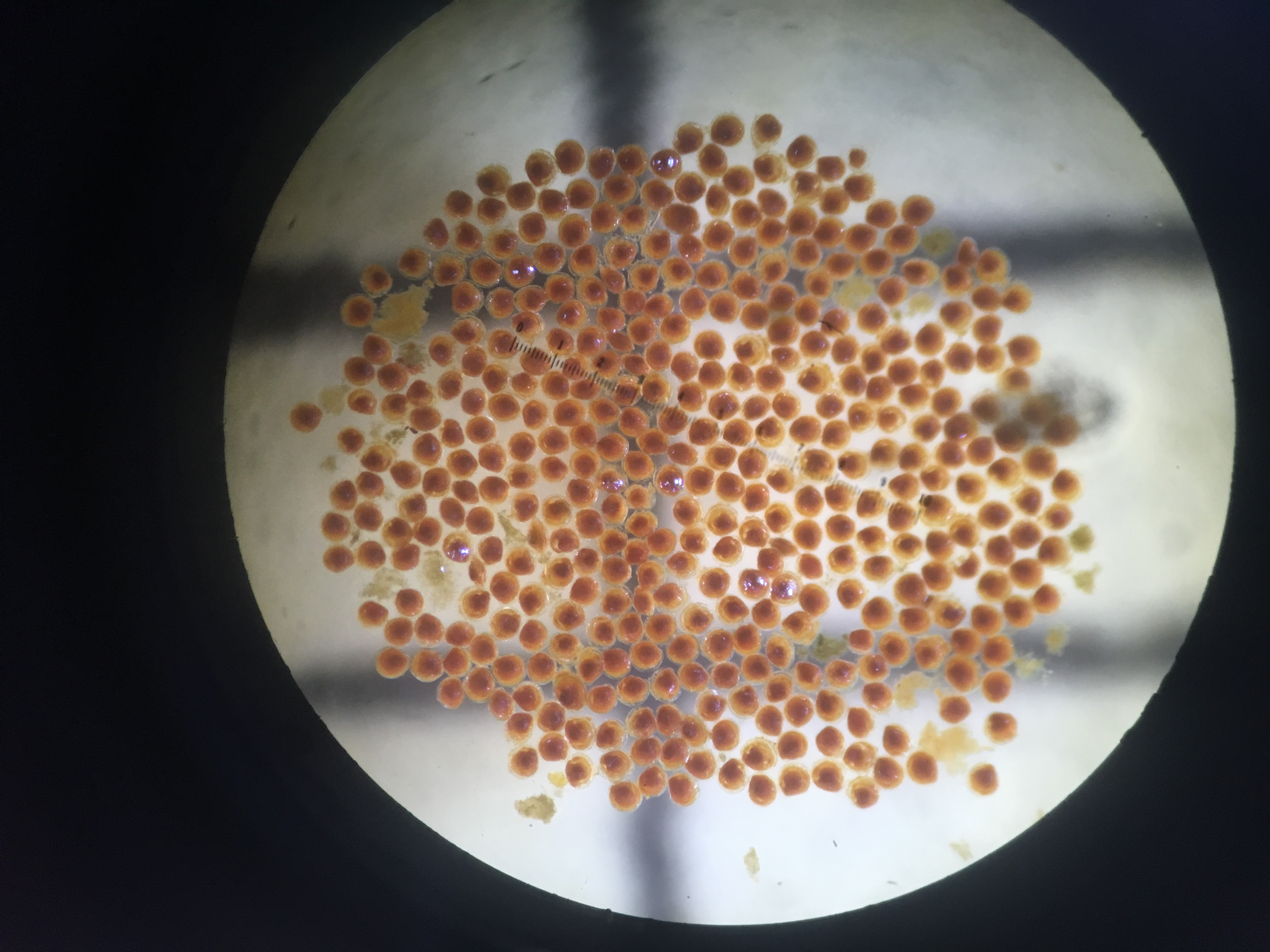 from The Shell Game https://ift.tt/2vVbL3V
via IFTTT

Preparing a genome (and my brain)

I forgot just how time-consuming (and brain pain-inducing) bioinformatics pipelines are! Good thing I set up my monitor. Screensharing on my laptop screen would not be ideal.

I created a new Jupyter notebook for the Bismark portion of my pipeline. Here’s the basic outline of the Bismark pipeline:

I got started on the genome preparation portion. To do this, I first downloaded the genome from NCBI. I learned that when you download FASTA files from NCBI, it specifies what kind of FASTA it is. In my case, I downloaded a .fna, or nucleotide FASTA file for the genome. I had to convert the .fna to an .fa for Bismark using the handy cp command.

Obviously I needed Bismark and Bowtie2 on the Mac mini before I could use it. This part was obviously strugglesome (see this issue if you don’t believe me). I downloaded Bismark from this website, and Bowtie2 using this code:

It was simple, but Steven suggested downloading the source code in the future to have more control over versioning and the full path.

Finally, I could use the bismark-genome-preparation command. Here’s what I needed:

And it’s running! I’ll check on it later tonight to see if I can move on to the alignment step. 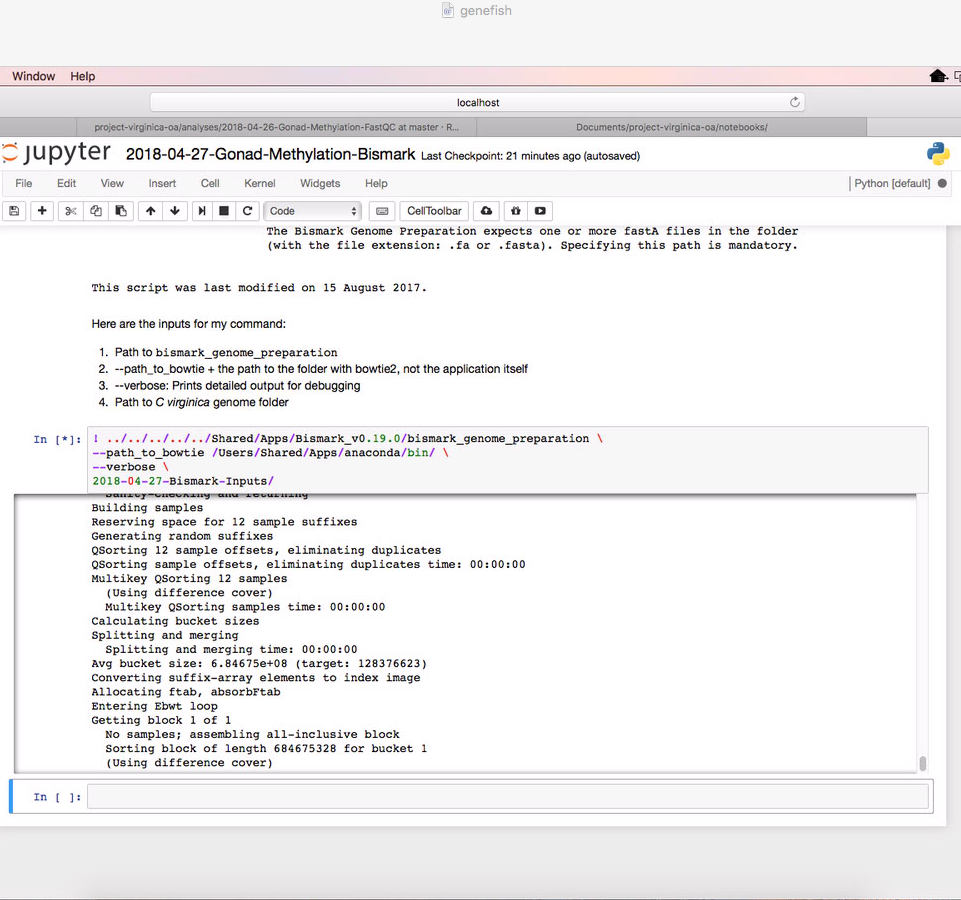 from the responsible grad student https://ift.tt/2FnAQE0
via IFTTT