This will display all jobs that between the specified start (-S) and end (-E) dates.

The tips below require the use off SSH keys between Mox and your computer/NAS of choice.

Pro-tip from UW IT:

To avoid having to enter UW NetID password every time one wants to copy to/from Mox, always initiate transfers from Mox.

I’m running a couple projects on the Ostrea angasi (pronounced “angus-eye”) while here. Some info on the species:

O. angasi is one of the native Australian oyster species, and is commonly known as the flat-, native-, or mud-oyster. Similar to O. lurida, populations declined starting in the late 1800’s due to disease, overfishing, & mudworm. There’s a very small commercial industry for flats, and farmers catch wild spat or purchase seed from the Port Stephens Fisheries Research Institute (where I’m working). Diseases have plagued other oysters that dominate the commercial landscape – the Pacific oyster and Sydney rock oyster – and some farmers are hoping that O. angasi could step in and become a larger proportion of their stock. Selective breeding is difficult because strip spawning is not successful, and similar to O. lurida they are hermaphroditic and brooders. There is interest in developing methods of reliably conditioning and producting larvae, being able to assign parentage for selective breeding, and potentially using neuropeptides to induce spawning (this is being tested on the Sydney rock oyster currently). No genomic resources have been developed for the species, but there is interest. I am running two projects while here; funding will determine my molecular analyses for the projects, and I will likely need to be flexible.

First up is a heat shock experiment to compare gene expression between stressed and unstressed O. angasi, and develop transcriptome for the species. In this project I will collect tissue samples from 2 groups of oysters at 3 time points: pre-stress, 6hr post stress, and 24hr post stress.

The thermal tolerance for this species is unknown, so I did a mini trial to estimate how to fully stress the animals without killing them. Pacific oyster heat stress trials are commonly 1hr at ~40C+ (e.g. Lang et al. 2009. I reviewed historic daily temperature records in New South Wales from 1966-1973 (Mike Dove gave me a nice fisheries report) to gauge the approximate max summer temperatures. The warmest I could find was 33C during that time frame. So, I decided to test the max temperature I could get with my heaters – 37C for 30 mins, 60 mins, and 120 mins. 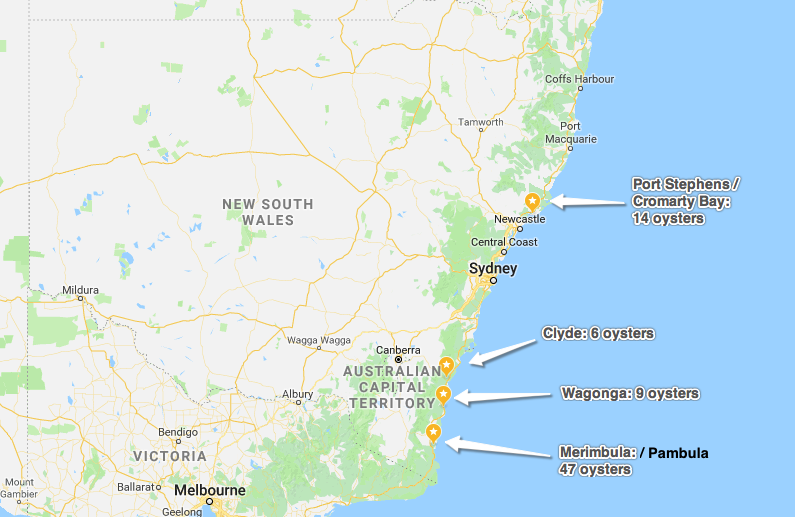 I used two AquaLogic digital temperature controllers (model DCS-T1) set to their max temp, 40C, and set a bucket of aerated seawater in the bath to heat overnight. In the morning I immersed 3 groups of oysters in the heated bath (see below table for bucket temperatures), and tested each group at 30, 60 and 120 minutes in the water (n=7 per duration):

These oysters were sourced from the southern extent of New South Wales. They all arrived at the hatchery approximately 9 days prior to this mini-trial, were held in ambient seawater (~17C) and fed a maintenance diet until the trial (they were fed the day before as well).

Temperatures during the trial:

I monitored survival from each group/duration; at 48 hours I made the call that 1 hr immersion in 37C was sub-lethal. This was premature, as I had mortality after 48 hours:

Nevertheless, I conducted the full heat shock trial. For this I had 2 groups of oysters: Merimbula and Port Stephens. On 6/23 I divided my 2 groups of oysters up into 1 control bag (n=5), and 5 treatment bags (n=5 for each bag), and held them in aerated seawater at ambient temperature (17-18C) overnight. I filled 6 buckets with the same water: 5 were held them overnight in the warm water bath (aerated), and 1 was a control bucket (aerated). I monitored water level to make sure that there was not significant evaporation. In the morning I removed 1 oyster from each treatment bag for pre-stress sampling. I then submerged the treatment and control bags into their respective buckets – 2 bags per bucket, as I had 2 groups of oysters. Temperature was checked regularly during the trial using an infrared thermometer. Oysters were removed after 60 minutes, and returned to their holding tank. At 6 and 24 hours post-stress I removed 1 oyster from each bag and sampled tissue. Tissue sampling took ~2 hours each time. I alternated sampling PS and Merimbula, but used a random number generator to determine the bag number. Oysters were held in seawater until sampling. 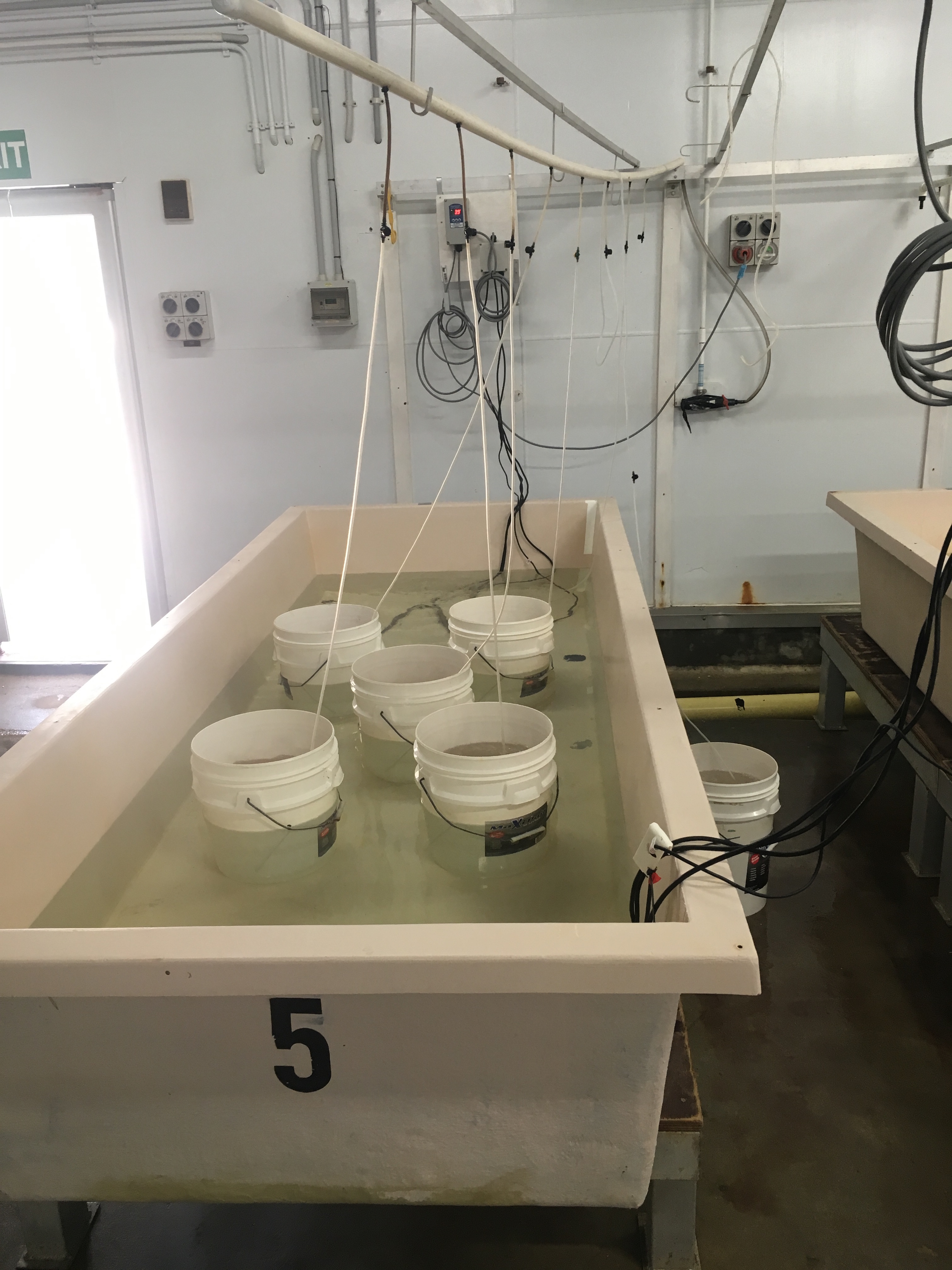 For each oyster I collected duplicate gill and gonad samples in 1.7mL tubes, and gonad in cassettes fixed in neutral buffered formalin (10%) for histology. The replicate gill & gonad samples were collected for transport purposes- I froze one rep in ethanol/dry ice bath, then into the -80, and the other into RNAlater, then into the -80 after ~24hrs. For each oyster I collected the following metrics: length (max length from hinge), whole weight (after drying with paper towels), shell weight, tissue wet weight (after pressing gently with paper towels to remove excess water). I shucked the oyster carefully, then pulled back the mantle and first gill to expose the second gill. I used dissecting scissors to cut the second gill along its length, then bisected for the 2 replicate samples. For the gonad, I sampled along the longitudinal axis posterior to the gut, avoiding any gut/digestive system contents (or cutting it out when possible), and bisected for the replicate samples. From the same area in the gonad I cut a small tissue sample (~0.2g) and placed into cassettes (5 tissues / cassette, from 5 diff. oysters). I pre-weighted my sample vials, so if needed I can estimate tissue mass. 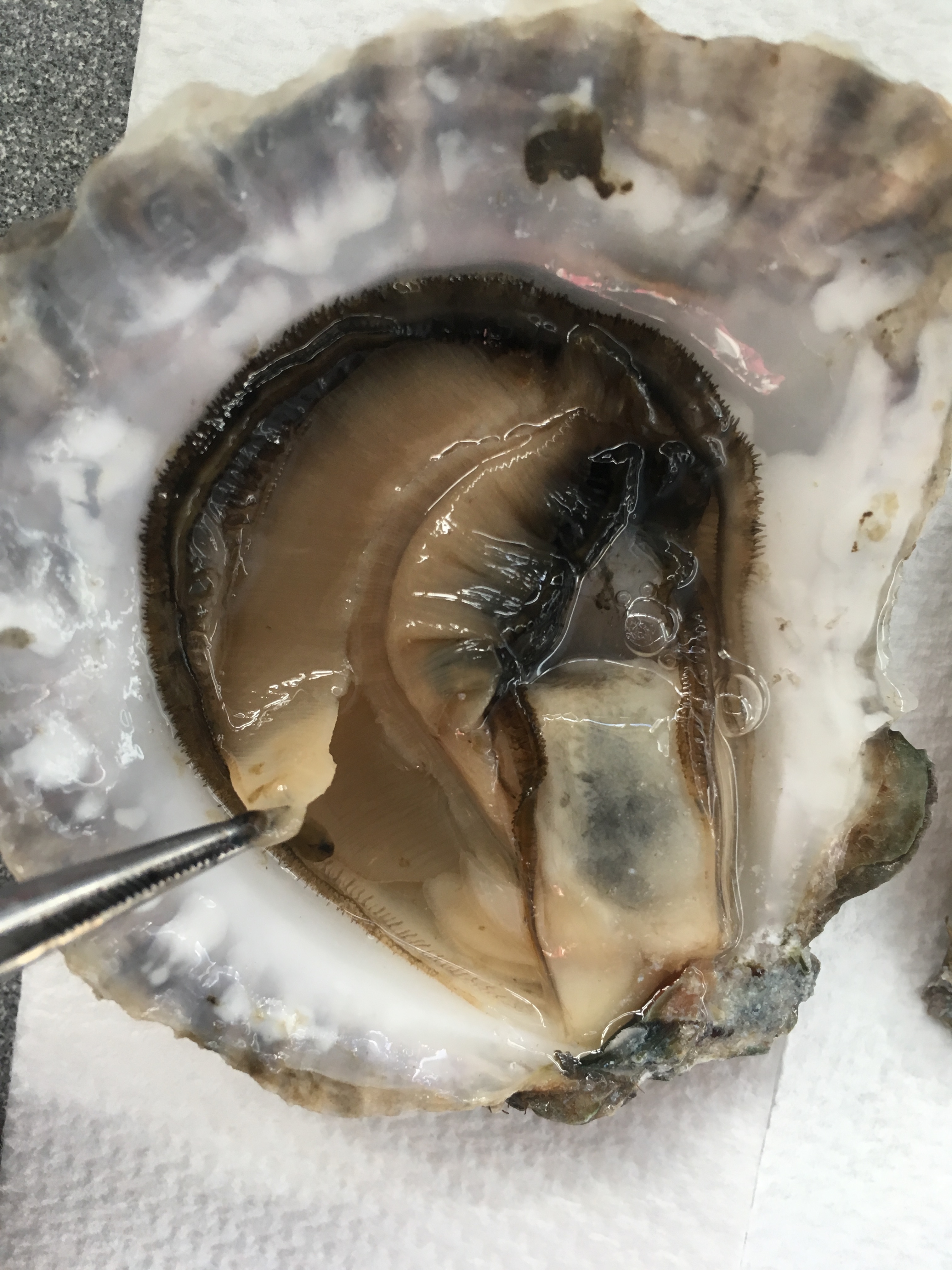 Ostrea angasi gape when they are stressed, which can happen during transport (making them a more difficult product to ship) 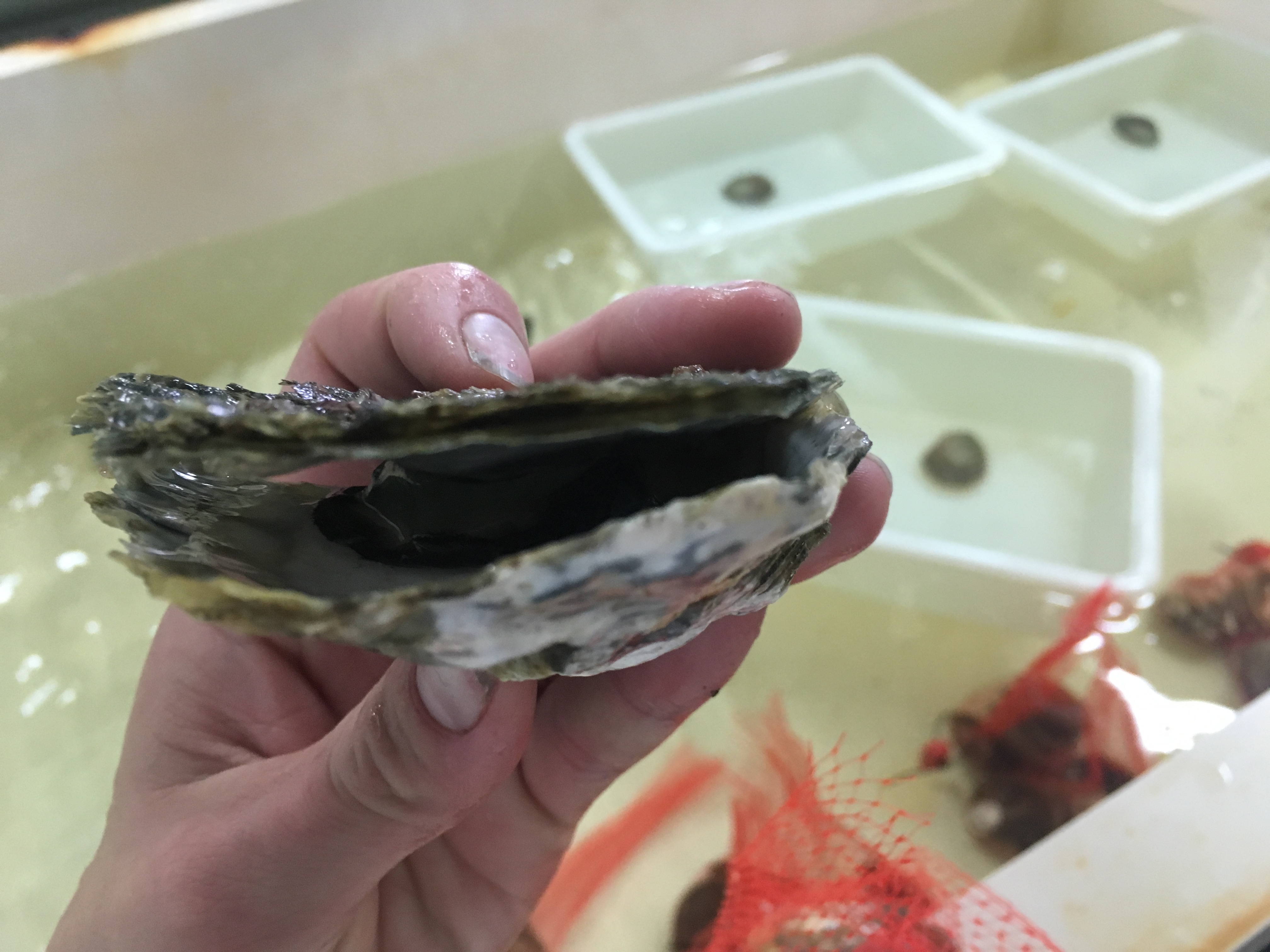 Some of the oyster gills were blue! 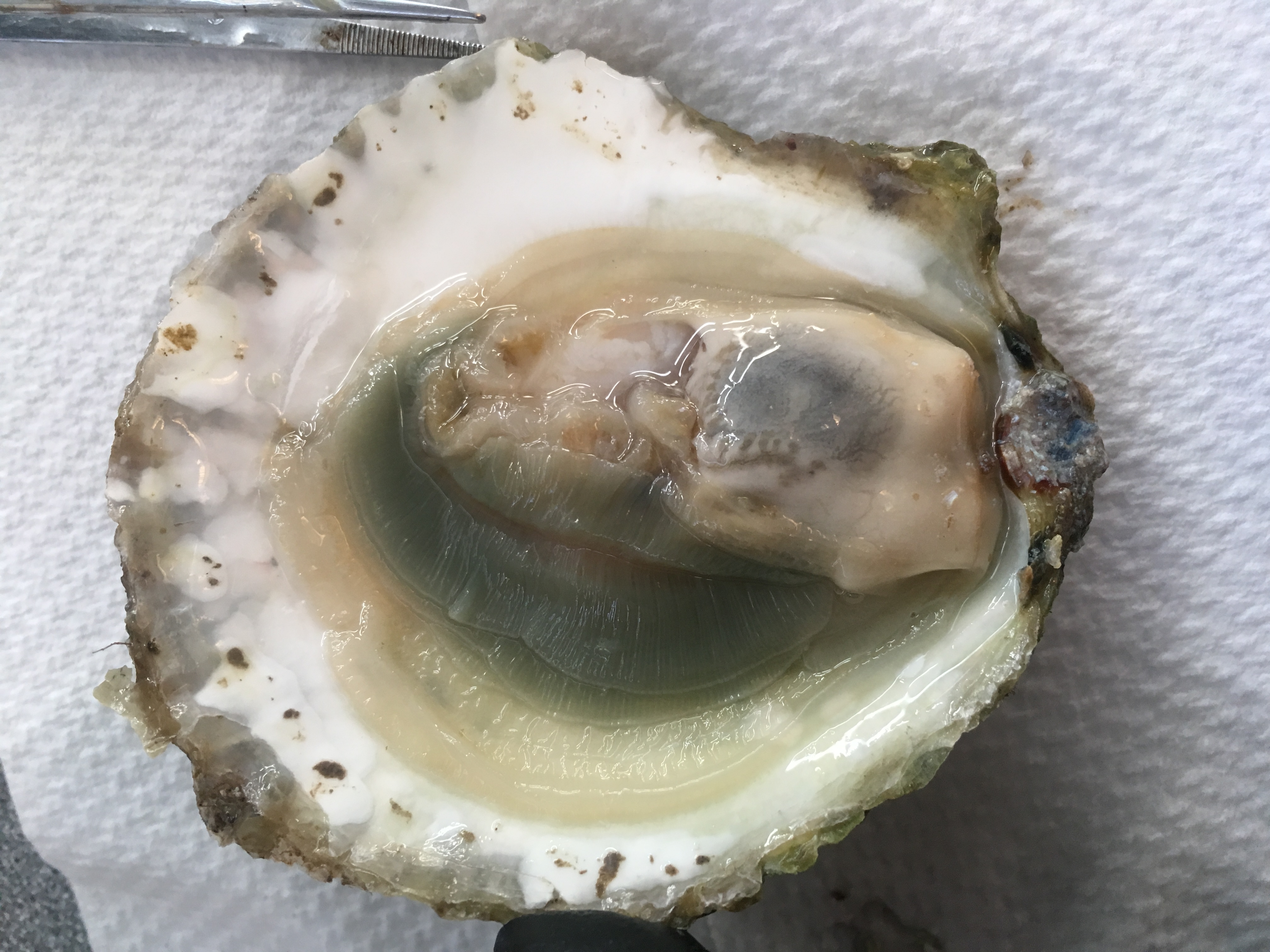 I monitored 10 oysters per group for survival (2 per treatment bucket), and 5 oysters per group from the control bucket. When I conducted the heat shock I expected survival to be good, as indicated by my test trial at 48 hours. This, however, was not the case! Oysters began dying at around 48 hours post shock, and continued to die over the next couple days. When I sampled oysters, they were all closed (no gaping), which is an indication that they were all still alive. Two oysters had gills curled in towards their adductor muscle, which I found to be the case in subsequent morts. Because this treatment proved to be lethal, it will change how I can analyze expression in gill and/or gonad tissue.

I had an interesting chat with Jake Minich (Scripps PhD student studying microbiome) about this project. He suggested that comparing the bacteria assemblanges in oysters that die to unstressed and thermally stressed oysters would be interesting – it could provide insight into the mechanism by which oysters succumb to death, and which bacteria fluorish as an oyster is dying. So, not wanting to waste some specimens I sampled my morts in the same way that I sampled the live oysters (except no replicate tissues). Most of the oysters were in decent shape (just recently dead, or moribund), so the gonad tissues were also fixed for histology (adding to my conditioning experiment numbers). I’m keen to follow up with Jake on processing samples for microbes, if not for this experiment, perhaps for my 2018 Oly project! More to come on that…

from The Shell Game https://ift.tt/2lAOSuA
via IFTTT 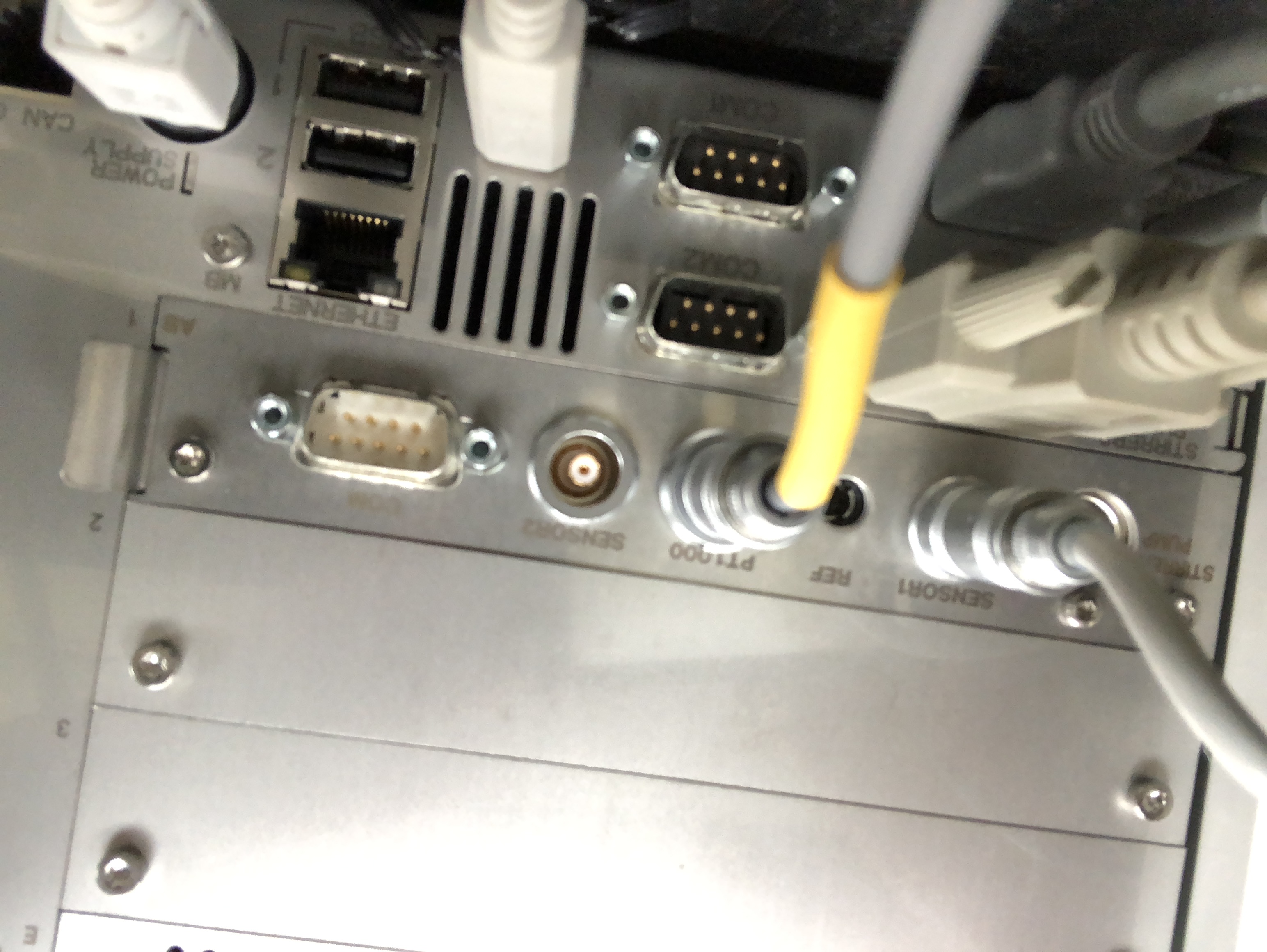