Yesterday was a long day at Pt. Whitney as we settled the geoducks in new heath trays. In the morning, Sam and I finished tidying up wires and cleaned banjos. We also released excess pressure in the CO2 canisters. Sam showed me where all the HOBO sensors were and we offloaded data to the shuttle and placed the HOBO that used to be in the downweller into the heath trays where the geoducks now are (so there are 2 total in the heath trays).

Brent and Steven arrived and had a meeting with Kurt to finalize the next steps for the geoduck. After the meeting is was determined that they will be planted on the low tide Sept. 7 and in the meantime, they will live in 4 heath trays that are divided with fiberglass to keep the treatment groups seperate.

Matt cut fiberglass and glued in the dividers. We consolidated some of their geoduck so we could have all the geoduck in one stack. We used coarser sand so it wouldnt go through the screens so we had to sieve and rinse the new sand and evenly distribute it into the trays. The screens were between 350-450 um with the exception of one that was 800 um. 450ml of sand was added to each 1/2 tray. Next we screened the geoduck so that no old sand would enter the new setup. They screened well and were not too sticky.

Once we finished screening and loading the trays in their stack we finished draining the conicals and broke down all the pipes for storage in the dry lab. Here are the geoduck in their new home! 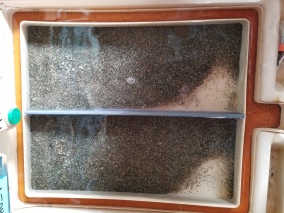