Today we had our first WSG meeting with the goal of having all of the projects wrapped up by April 17th.

We will be meeting every Wednesday at 2pm.

Things to focus on for this week:

Steven will take a look at Oyster-Larval-Proteomics paper and capture all the important and interesting stuff.

Results:
Abundance counts
What proteins are expressed in total
Comparison of proteins expressed between two temps

FOCUS ON GETTING RESULTS

What journal should this go to?

I’ll be annotating the transcriptome assembly (from 20190215) using Trinotate and part of that process is having BLASTx output for the Trinity assembly, so have run BLASTx on Mox.

I’ll be annotating the transcriptome assembly (from 20190215) using Trinotate and part of that process is having BLASTx output for the Trinity assembly, so have run BLASTx on Mox.

Cleaning up analysis for poster figs

Going back to initial protein selection and determine which methods should be used by looking at the differences in protein abunadance between temperatures of the proteins each method identifies.

Today I tried out the new plan for extracting RNA. It took quite a long time and none of the 24 samples had detectable RNA. Details in post.

Set up and preparation

The longest part of this whole thing was labeling tubes.

I prepared solutions for 24 samples plus extra:

This part also took a really long time. For one, finding the tubes in the -80 took some time because I did not place them in there in number order.

Additionally, it took a long time to let them thaw, vortex for a few seconds, and then sample out 15ul of the slurry.

Made standards: 10ul of each + 190ul working solution

ALL TUBES READ “OUT OF RANGE, TOO LOW

Finished MBD enrichment on 20190312 using the MethylMiner kit. Since we were out of Qubit assay tubes, I could not quantify these samples when I initially completed the ethanol precipitation. Tubes are in, so I went forward with quantification using the Roberts’ Lab Qubit 3.0 and the 1x High Sensitivity dsDNA assay.

Used 1uL of each sample.

A.K.A. that time I used a lot of bash for loops and awk commands while understanding what I was doing.

I noticed Mac’s 2013 paper included how much of the original input DNA was recovered from MBD procedures. I figured it was a good thing to include in my paper too! In this spreadsheet, I documented the µg of DNA input I used from each sample. In total, I used 37.28 µg. After MBD, the samples were resuspended in 25 µL of buffer. The total yield was 1.42515 µg. This meant that only 3.82% of DNA was recovered after MBD.

One important part of characterizing general methylation trends is to explain how many reads were used for analysis. In this Jupyter notebook, I downloaded FastQC and bismark reports. I originally thought I should download the full trimmed and untrimmed files, but in this issue Steven pointed out that all of that information would be stored in summary reports.

I used a similar series of commands for each report to obtain read counts:

I want to describe general methylation trends, irrespective of pCO2 treatment in my C. virginica gonad data. Claire and Mac both had sections in their papers where determined if a CpG locus was methylated or not. From Mac’s 2013 PeerJ paper:

A CpG locus was considered methylated if at least half of the reads remained unconverted after bisulfite treatment.

They characterized this using methratio.py in BSMAP, but Steven pointed out I could use .cov files in this issue. In this Jupyter notebook, I first identified loci with 5x coverage for each sample by using this awk command in a loop:

The next step was to concatenate all loci with 5x coverage across my five control samples. In this step, I’m essentially mimicing methylKit unite. I used a series of join commands for this task, then used awk to clean up the columns.

The final file with 5x loci across all samples can be found here. By summing the percent methylation information from each sample for each locus, I could characterize its methylation status and separate loci and save these loci in a new file:

The last step to describe methylated CpG is to figure out where the 60,552 loci are in the genome! I set up intersectBed in my Jupyter notebook to find overlaps between my methylated loci and exons, introns, mRNA coding regions, transposable elements, and putative promoter regions. When creating my BEDfile, I needed to specify tab delimiters (\t) to get intersectBed to recognize the file:

I had lots of awk and bash coding issues today BUT I FIGURED MOST OF THEM OUT MYSELF! Just in time to go on vacation and lose all of my hard-earned coding prowess.

from the responsible grad student https://ift.tt/2OkxJ6h
via IFTTT

Click here to give feed back on this poster 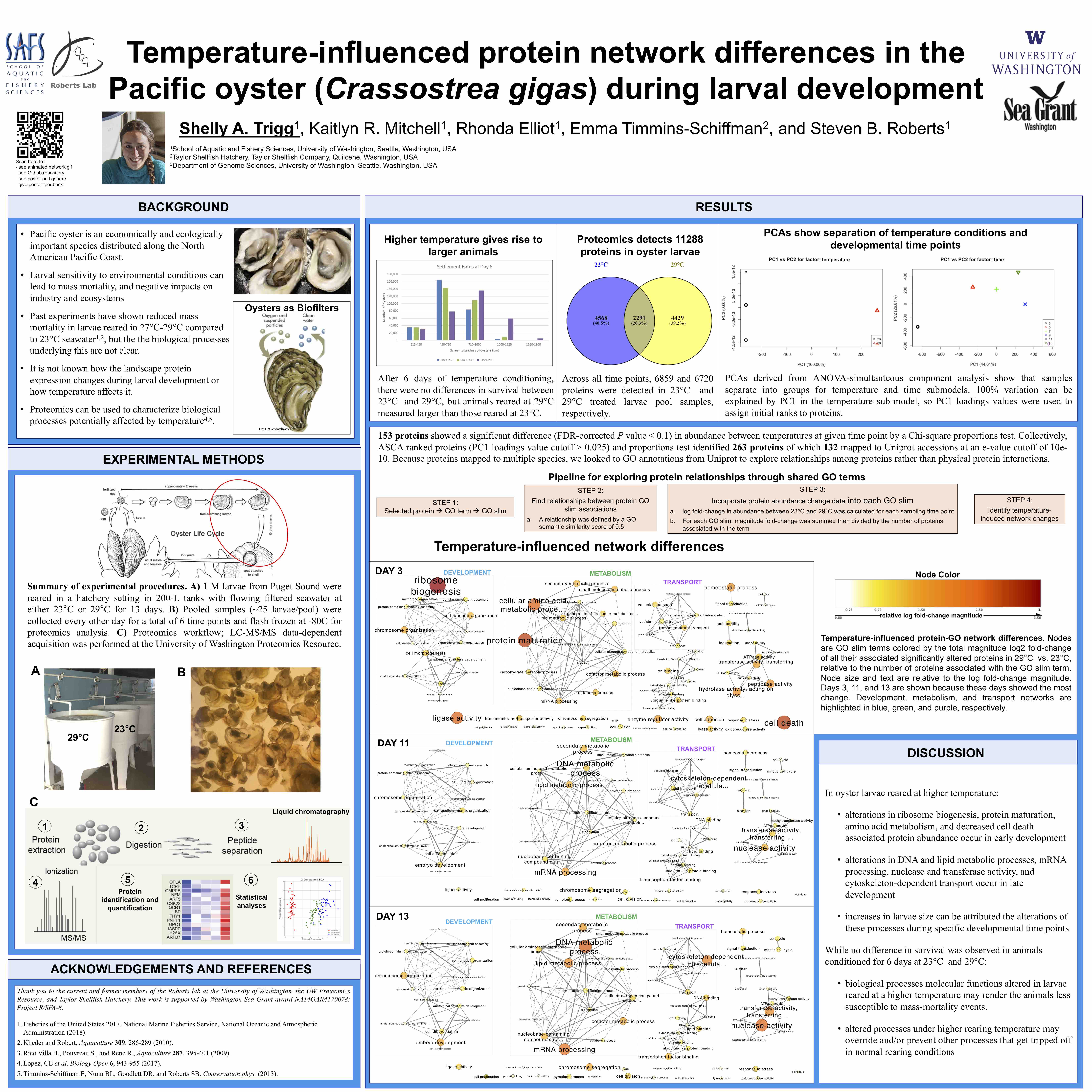 The Pacific oyster has major ecological and economic importance serving as a biofilter and habitat in coastal ecosystems, and contributing over $190M to annual marine aquaculture revenue. However, little is known about the landscape of protein expression during early development, a time when mass mortality is common which can negatively impact industry and ecosystems. To better characterize physiological pathways and associated networks active during oyster development we performed a developmental time series proteomics analysis of larval cultures reared at 23°C and 29°C. These temperatures were selected based on the reports from the aquaculture industry that differential performance is observed in oysters at these temperatures. We found differentially abundant proteins among larval cultures reared at different temperatures and a larval culture that experienced mass mortality. Results from functional protein network analyses provide deeper insight into the mechanisms underlying fundamental developmental processes and mortality events. This proteomics analysis combined with survival and development observations offers greater clarity on environmental conditions that can improve aquaculture production. 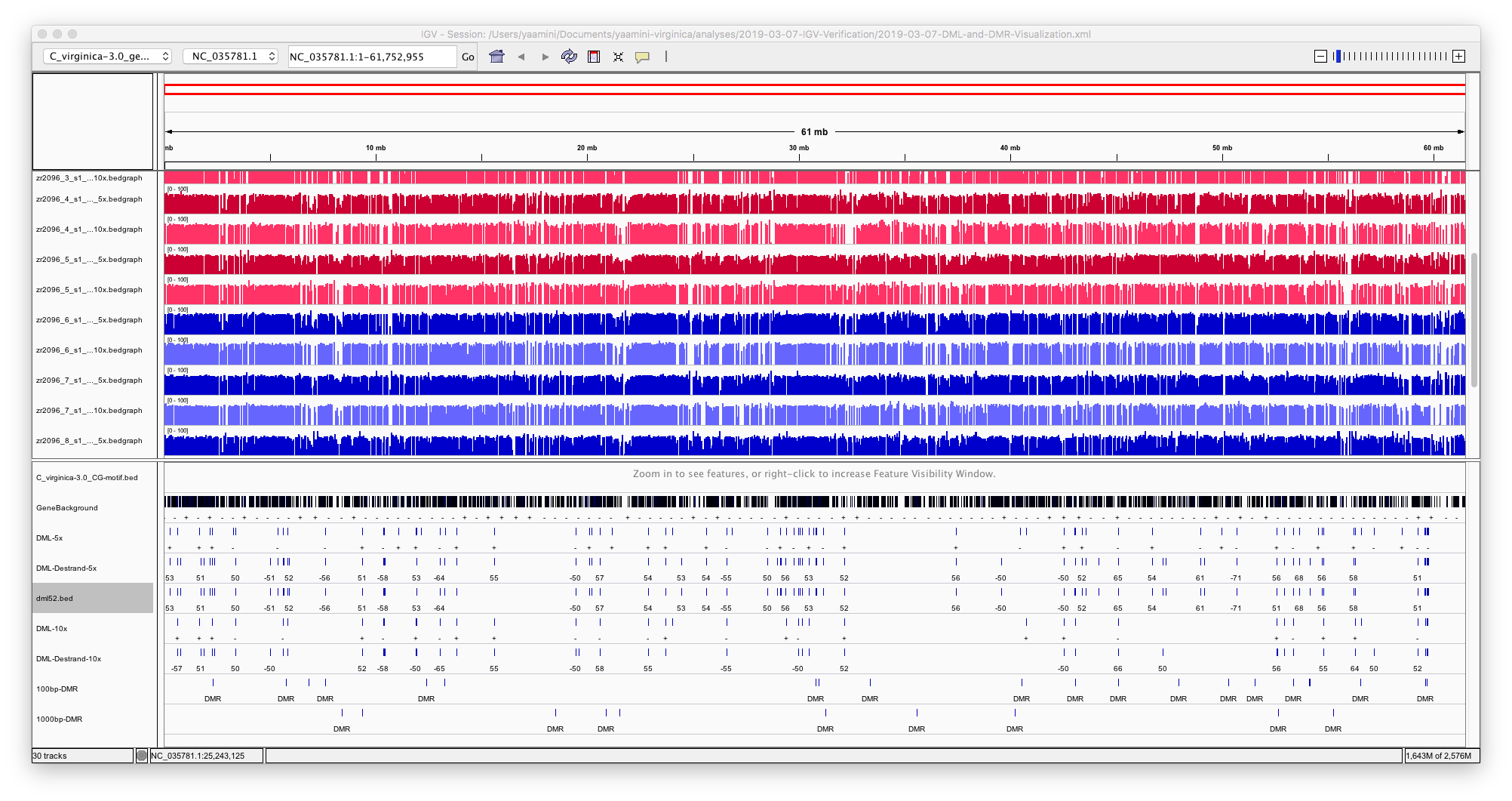 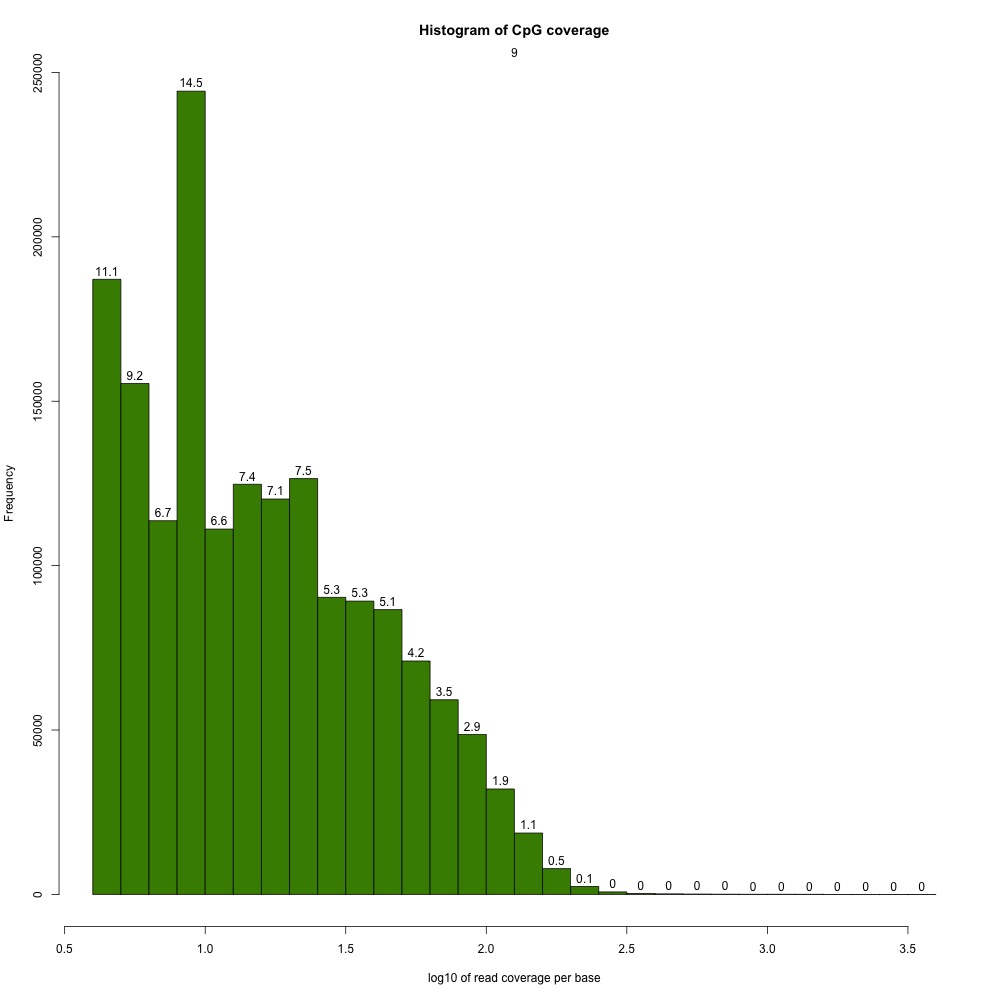 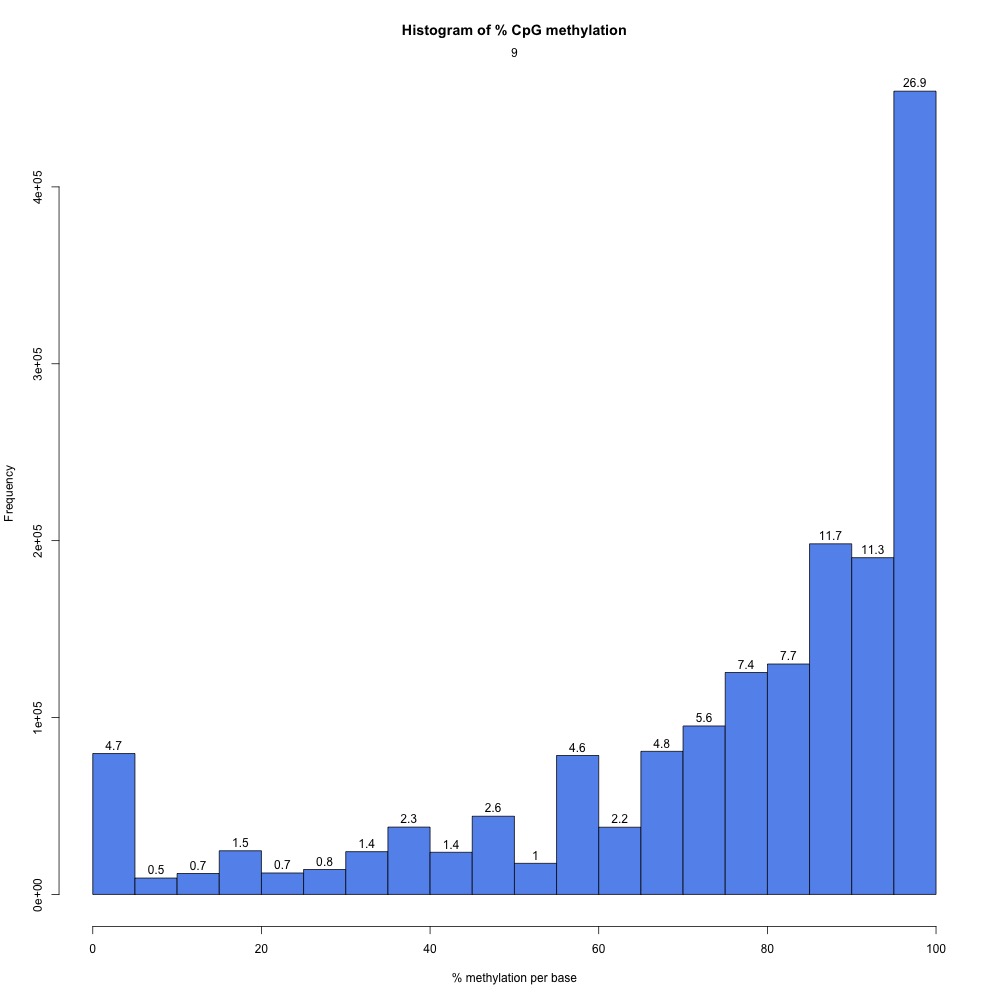 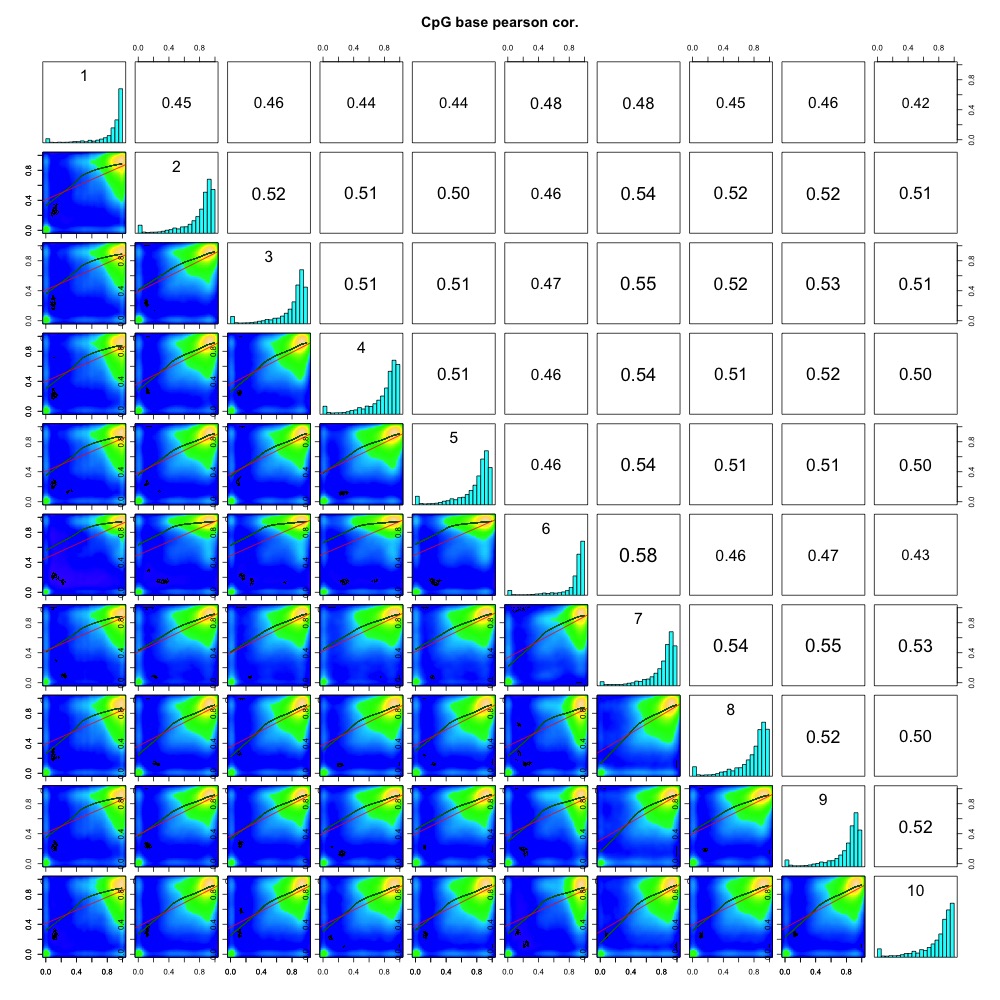 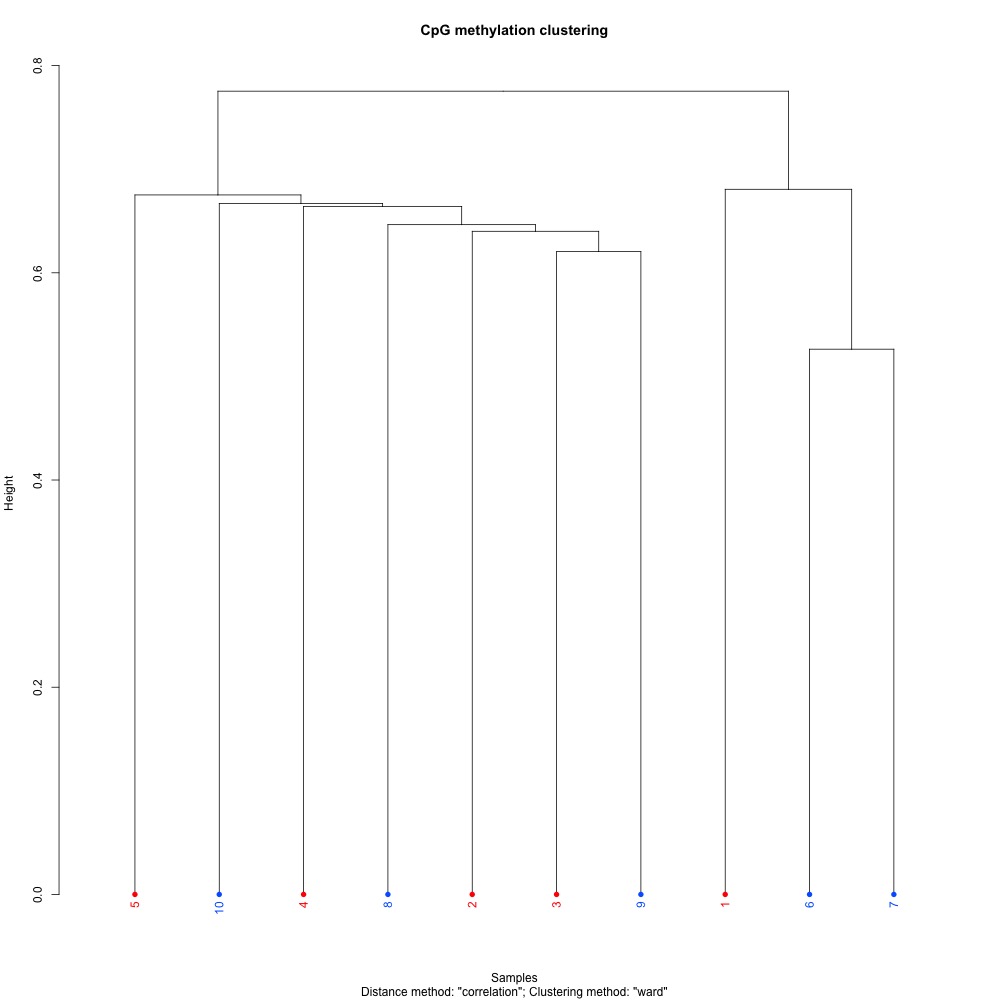 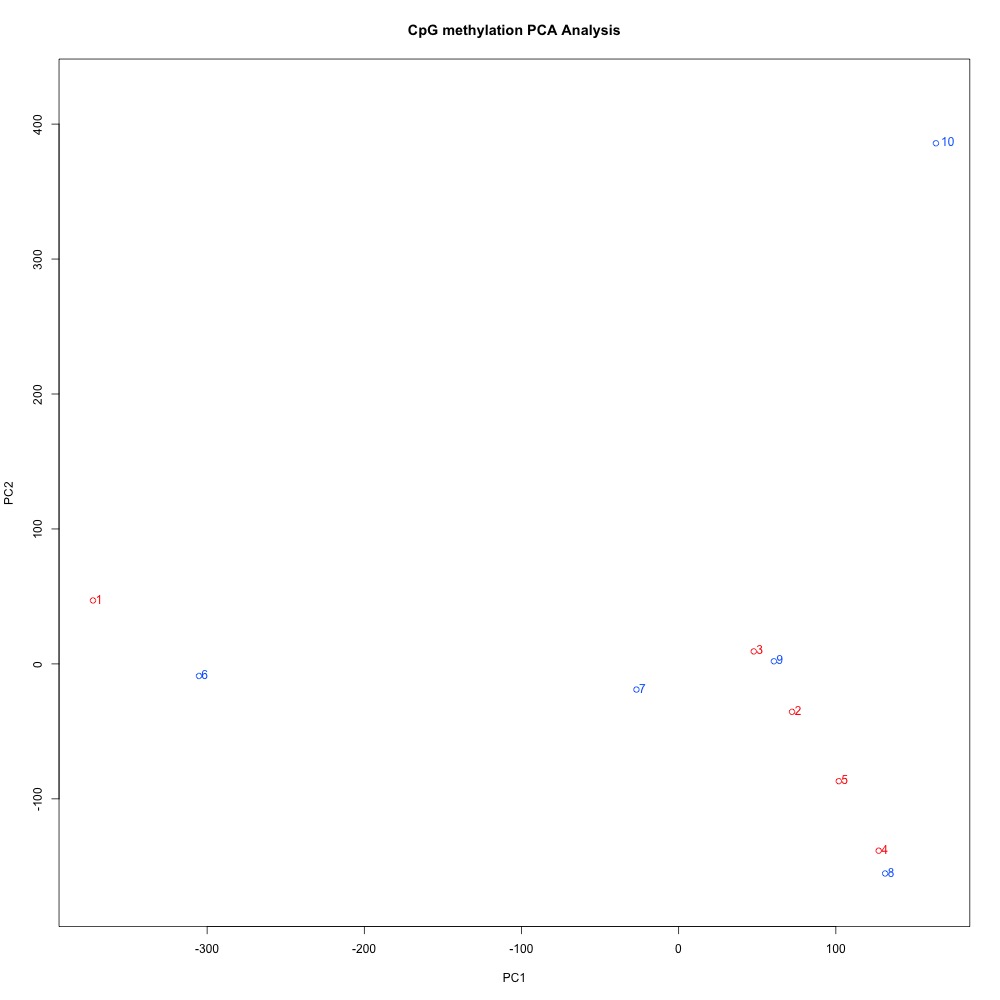 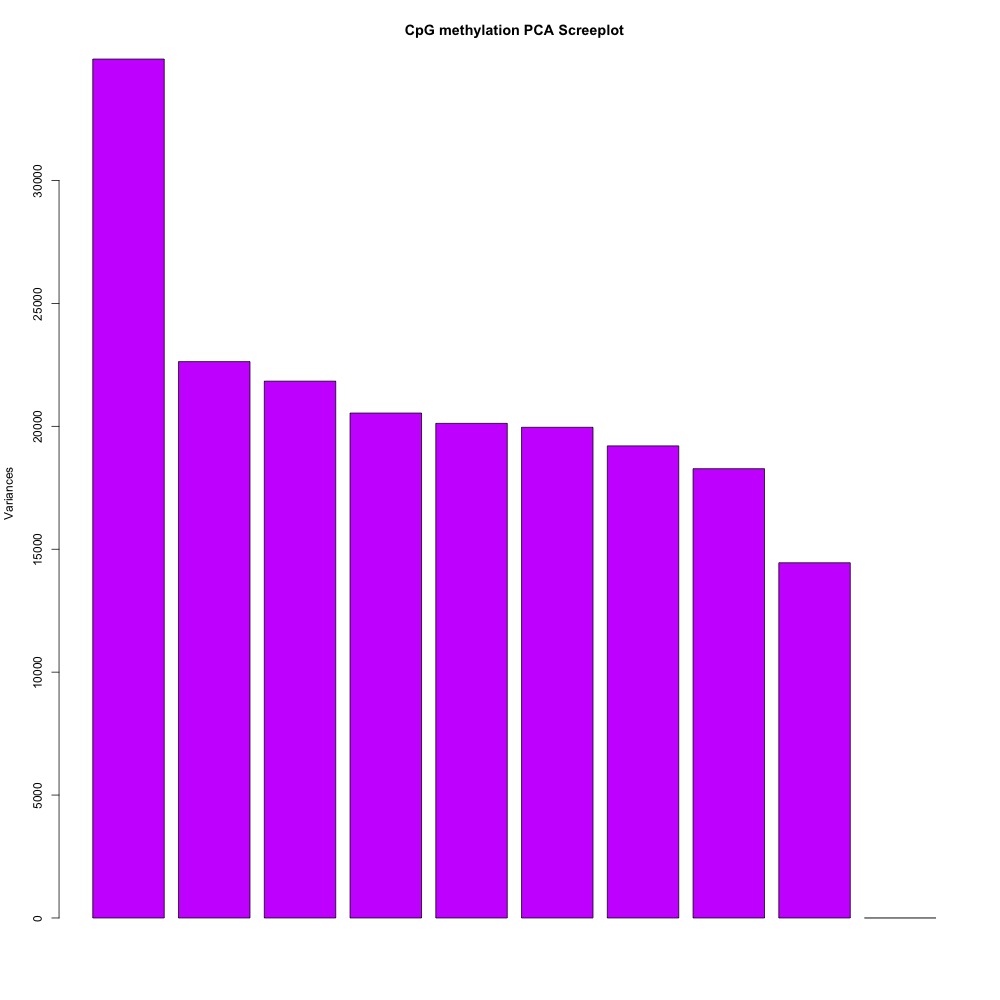 Here’s the general extraction plan. There will be a final version of this extraction plan of actually selecting the tube numbers, and taking into account whatever feedback I get.

Number of samples to process

Based on previous RNeasy processes (Feb 15th, and Feb 20th), we have decided that using 50ul or less of the hemo slurry is best with the RNeasy Kit.

I’ll use 20ul of the hemolymph slurry from about 150 individual sample tubes. (Number of tubes processed will depend on the RNA yield we get)

I’ll process 8 samples at a time, and will select tube numbers such that each infection status and temperature treatment group has 8 samples selected, along with 4 back-up tubes in case there isn’t detectable RNA in any of the samples.

To start, we’ll do 12 sets of 8 tubes, running 1ul of each sample on the Qubit at the end of each set, keeping track of which pools need extra RNA. Then, after the 12 sets of 8, I’ll collect whatever extra tubes we need from the back up list that I’ll make and decide how many additional sets need to be processed.

Q: Should I prep huge containers of reagents or should I prep them fresh before each extraction?

Upload the Qubit results from each set of 8 immediately to my laptop, add the tube numbers manually, and save.