Based on feedback from Katie, Steven, and Alan, I went back to my code and revised C. virginica gonad methylation trends.

But first…let’s revist my grand procalamtion: “I’m going to finish this paper by the end of the month.” (lol) I think I can finish my analyses by the end of this week and have some sort of draft discussion. Before the next E2O meeting, I’ll definitely have a draft paper ready.

In this Jupyter notebook, I characterized the location of all 5x CpGs I had data for, sparsely methylated loci, and unmethyalted loci. Katie suggested I make a table with this information for statistical analyses, so I did.

For this round of chi-squared tests, I updated my overlap proportions file. I used this code to conduct chi-squared tests for various groupings. Every single time, I found that my distributions were significantly different. However, I’m now doubting how effective chi-squared tests are as a statistical approach. Looking at the observed, expected, and residual values from chisq.test from my test comparing all CG motifs with those enriched by MBD, I notice that my expected values are not what I want. In comparing these distributions, I want the background proportions (in this case, all CG motifs), to serve as the expected values, but that’s not the case:

I psoted this issue to get some clarification on my methods.

In the meantime, I revised my figures! 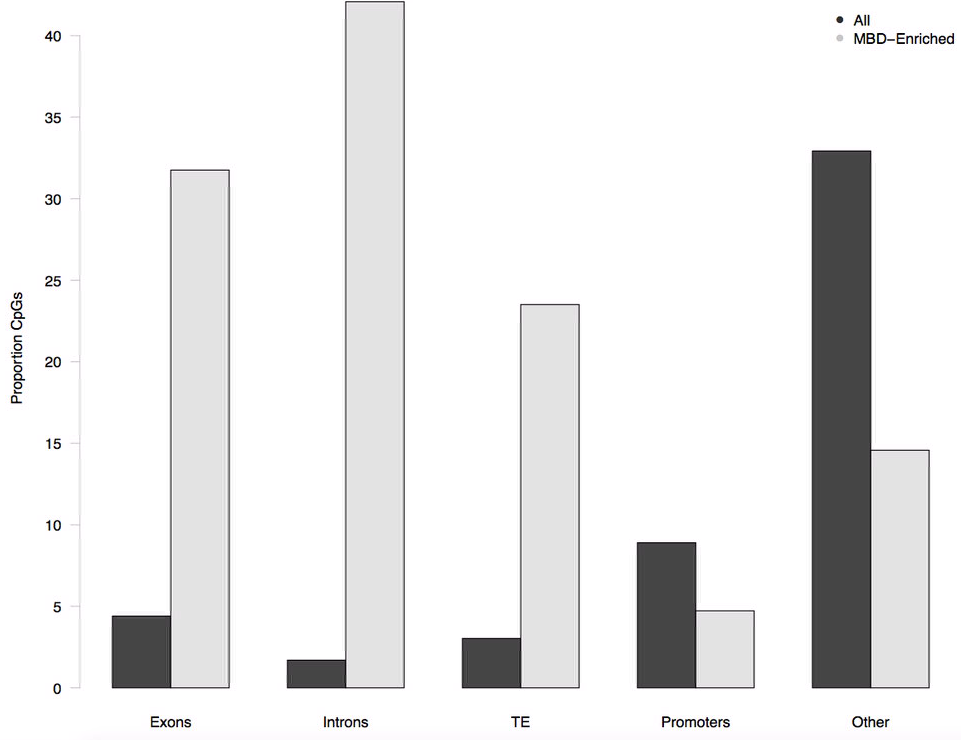 Figure 1. Distribution of CpGs enriched by MBD versus all CpGs in the C. virginica genome. 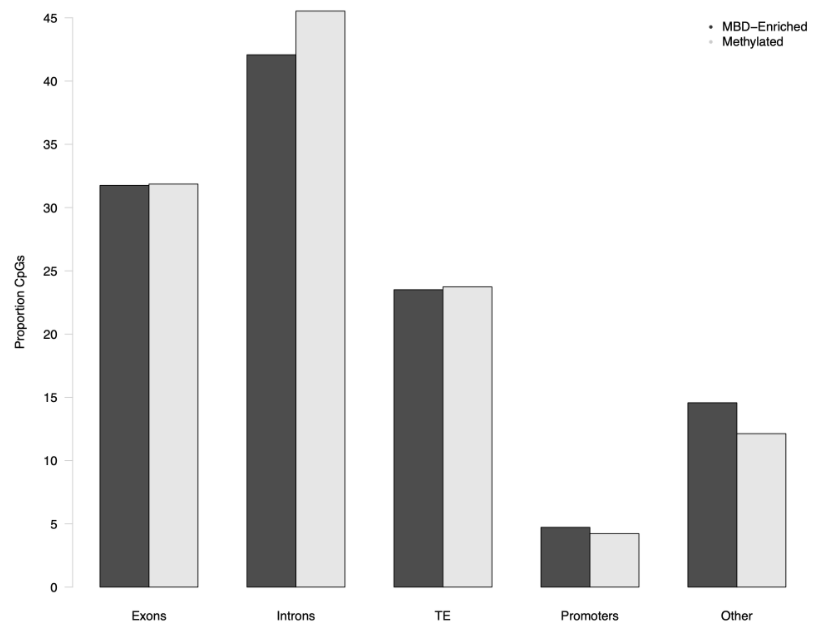 Figure 2. Distribution of methylated CpGs versus those enriched by MBD. 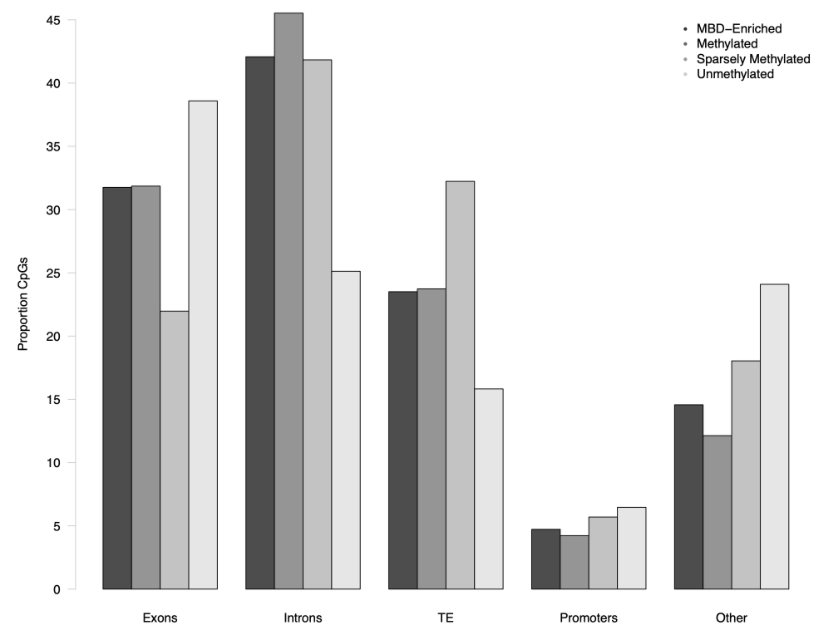 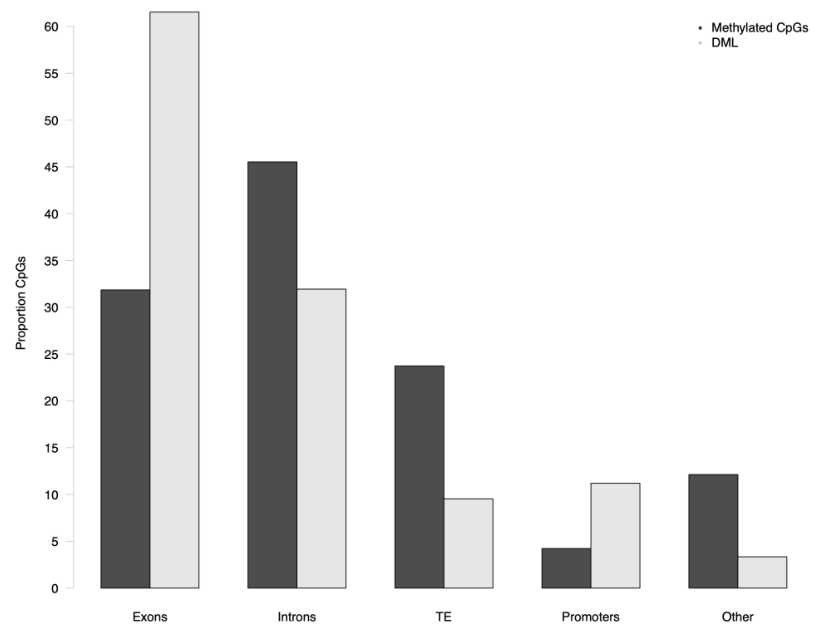 Once I sort out my statstical tests I can actually add significances to my figures.

from the responsible grad student http://bit.ly/2UK6Wlj
via IFTTT

Additionally, Sam worked on an experiment to determine the optimum time for KCL egg priming. These are some important points about the experiment (more info is on Slack):

Bottles were discarded because we did not see many D-hinge larvae:

Interestingly, juveniles were crawling up the side in one industry tank:

A while ago, Steven tasked me with assessing some questions related to the sequencing coverage we get doing MBD-BSseq in this GitHub issue. At the heart of it all was really to try to get an idea of how much usable data we actually get when we do an MBD-BSseq project. Yaamini happened to have done an MBD-BSseq project relatively recently, and it’s one she’s actively working on analyzing, so we went with that data set.

Subsequently, the data was concatenated, subset, and aligned using Bismark:

Today, I finally found the time to dedicate to evaluating alignment coverage of each of the Bismark sequence subsets. It was done in a Jupyter Notebook and solely with Bash/Python! I used this as project as an excuse to dive into using Python a bit more, instead of using R. For what I needed to accomplish, I just felt like this approach was simpler (instead of creating an R project and all of that).

Nearing the end of this quick metagenomics comparison of taxonomic differences between the two pH treatments (pH=7.1 and pH=8.2). Previously ran:

After this completes, I’ll run KronaTools to get a rundown on taxonomic makeup of these two different pH treatments. I don’t expect BLASTn to take terribly long (based on previous metagenomics runs wit this data set); I’d guess around 6hrs.

Continuing with a relatively quick comparison of pH treatments (pH=7.1 vs. pH=8.2), I wanted to run gene prediction on the MEGAHIT assemblies I made yesterday. I ran MetaGeneMark on the two pH-specific assemblies on Mox. This should be a very fast process (I’m talking, like a couple of minutes fast), so it enhances the annotation with very little effort and time.

This will output a nucleotides FastA, proteins FastA, and a GFF for each of the two assemblies (i.e. pH treatments)

A report involving our work on the geoduck water metagenomics is due later this week and our in-depth analysis for this project using Anvi’o is likely to require at least another week to complete. Even though we have a broad overview of the metagenomic taxa present in these water samples, we don’t have data in a format for comparing across samples/treatments. So, I initiated our simplified pipeline (MEGAHIT > MetaGeneMark > BLASTn > KronaTools) for examining our metagenomic data of the two treatments:

I ran MEGAHIT on the trimmed HiSeqX data, but concatenated the corresponding pH treatment FastQ files to create a single assembly for each pH treatment.

We received whole genome bisulfite sequencing (WGBS) data from Genewiz last week on 20190408, so ran FastQC on the files on my computer (swoose). FastQC results will be added to Nightingales Google Sheet.

Each set of FastQs were processed with a bash script. This file (ends with .sh) can be found in each corresponding output folder (see below).

I previously assembled and annotated P.generosa larval Day 5 transcriptome (20190318 – mislabeled as Juvenile Day 5 in my previous notebook entries) using just our HiSeq data from our Illumina collaboration. This was a an oversight, as I didn’t realize that we also had NovaSeq RNAseq data. So, I’ve initiated another de novo assembly using Trinity incorporating both sets of data.

Ran a de novo assembly on our HiSeq and NovaSeq data from Hollie’s larval Day 5 EPI 99 sample. This was done for Christian to use in some long, non-coding RNA (lncRNA) analysis.

NovaSeq data had been previously trimmed.

Trimming of the HiSeq data was performed via Trinity, using the --trimmomatic option.

I previously assembled and annotated P.generosa gonad transcriptome (20190318) using just our HiSeq data from our Illumina collaboration. This was a an oversight, as I didn’t realize that we also had NovaSeq RNAseq data. So, I’ve initiated another de novo assembly using Trinity incorporating both sets of data.

NovaSeq data had been previously trimmed.

Trimming of the HiSeq data was performed via Trinity, using the --trimmomatic option.