Two weeks ago, I was struggling to generate a feasible intron track. At FROGER, Jon shared the code he used to generate C. virginica feature tracks to the wiki. The code he used to generate tracks was similar to my code, which was comforting. Looking at his code for intron tracks, he used a combination of complementBed and intersectBed, which is what Sam suggested in this issue. I decided to use that approach with my own tracks.

Instead of just creating an intron track, I decided to create all of the additional tracks Jon created: intergenic regions, non-coding sequences, introns, and mtDNA. Before I could create tracks, I needed to create a bedtools friendly genome file. The genome file needed to have chromosome name and lengths. I previously created this document, so I just copied it to my analysis folder (it can be found here). I also isolated just the chromosome names in this document.

To isolate intergenic regions, I first needed to sort the gene track. I used sortBed to organize the listings by chromosme name:

Jon also included a step where he used mergeBed on the sorted file to merge any transcript variants. I skipped this step for now and sorted my exon track. I used complementBed with the sorted gene track to find all possible locations of intergenic regions, then removed sorted exons with subtractBed:

Non-coding sequences were created using the complement of exons:

Generating the mitochondrial DNA track was the easiest. The smallest chromosome, NC_007175.2, is mtDNA, so I just needed to isolate genes from that chromosome:

Of course, no track generation is complete without looking at the products. I perused the tracks in this IGV session and was pretty happy with how they turned out! I am more confident in these tracks than the pre-generated ones because I understand how they were made.

Since my tracks looked good, I posted the .gff3 and .bed verisions here.

The reason I started generating new feature tracks is because Steven asked me to do so in this issue. I obtained the length of each feature track and counted overlaps with the pre-generated CG motif track.

I also posted Table 1 in the issue. I noticed that there are more CG motif overlaps in the introns over exons, and non-coding sequences over coding sequences. However, genes have more overlaps than intergenic regions.

Now that I had better feature tracks, I figured I’d recharacterize my DML overlaps. Although I have more tracks I can use, I decided to focus on intersections with genes, exons, introns, transposable elements, and putative promoters. Anything that did not overlap with these categories could be considered “other” or “intergenic.” I opened this Jupyter notebook, downloaded the new tracks from gannet, and changed the variable paths (again…so. forking. handy). I counted overlaps and wrote out files to this directory. I didn’t want to overwrite any of the files I generated with previous versions of my feature tracks, so I tagged everything with the date (2019-05-29). I also created a new directory for my revised flanking analysis, which can be found here. The previous version of my Jupyter notebook has overlap proportion calculations and extraneous chunks of code that were confusing, so I removed them from the notebook. It’s not much cleaner and easier to follow (I think).

The main concern Mac brought up in this issue that sent me on a saga of feature track generation was that overlap counts for methylated CpGs (methylatedCpG) were greater than those for CG motifs (totalCpG). That doesn’t seem to be the case this time!

Returning to the chi-squared test

Since I felt better about my overlap counts, I updated this document so I could them for statistical analyses. Mac said she talked to Loveday Conquest about statistical tests, and that after some discussion chi-squared tests were deemed appropriate. I’m just going to continue with the chi-squared tests in this R Markdown document and perhaps ask Katie Lotterhos if she has other ideas or knows of any post-hoc tests during our next meeting.

Table 4. Results of chi-squared tests between various CpG groupings. All CpGs refer to all CG motifs in the C. virginica genome. MBD-Enriched CpGs are those found in C. virginica samples with at least 5x sequencing depth. Of those CpG enriched by MBD treatment, methylated CpGs were those with at least 50% methylation. DML were at lest 50% different between treatment with q-values < 0.01. Comparisons were only conducted with a particular CpG grouping and it’s associated background (i.e. All CpGs vs. MBD-Enriched, MBD-Enriched vs. Methylated CpGs, and Methylated CpGs vs. DML), with N/A referring to tests that were not conducted. Values above the diagonal are χ² statistics with df = 4, and values below the diagonal are associated p-values. 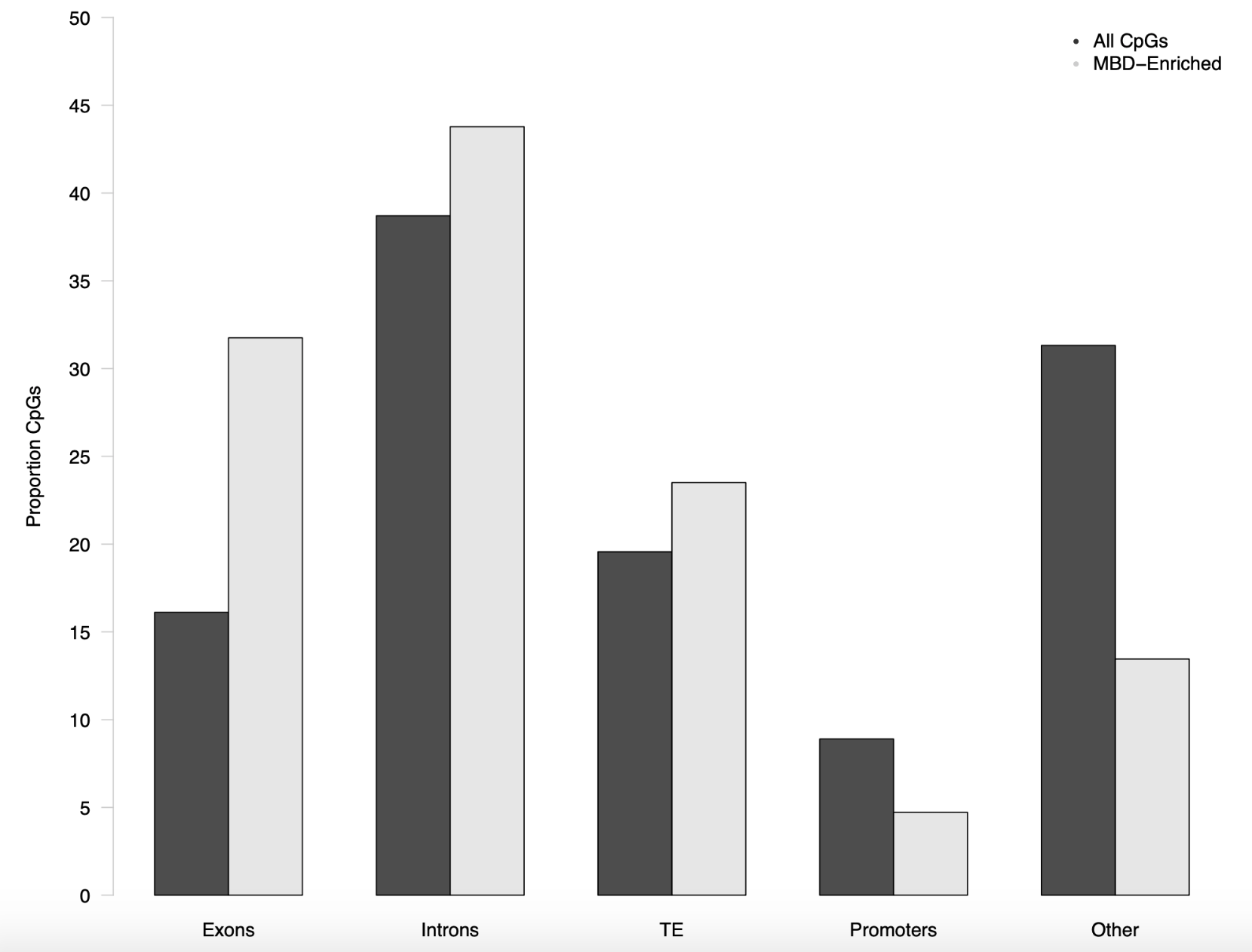 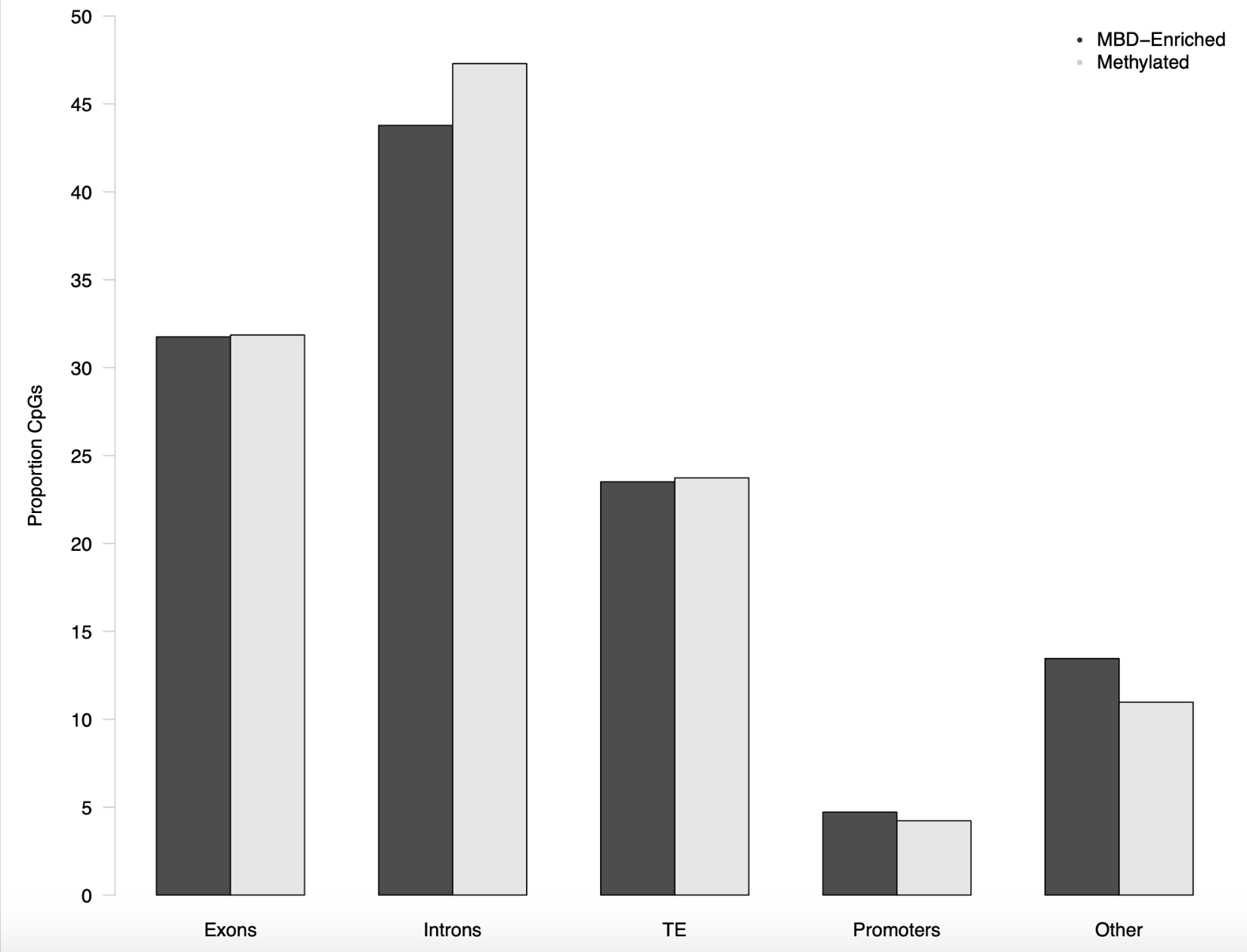 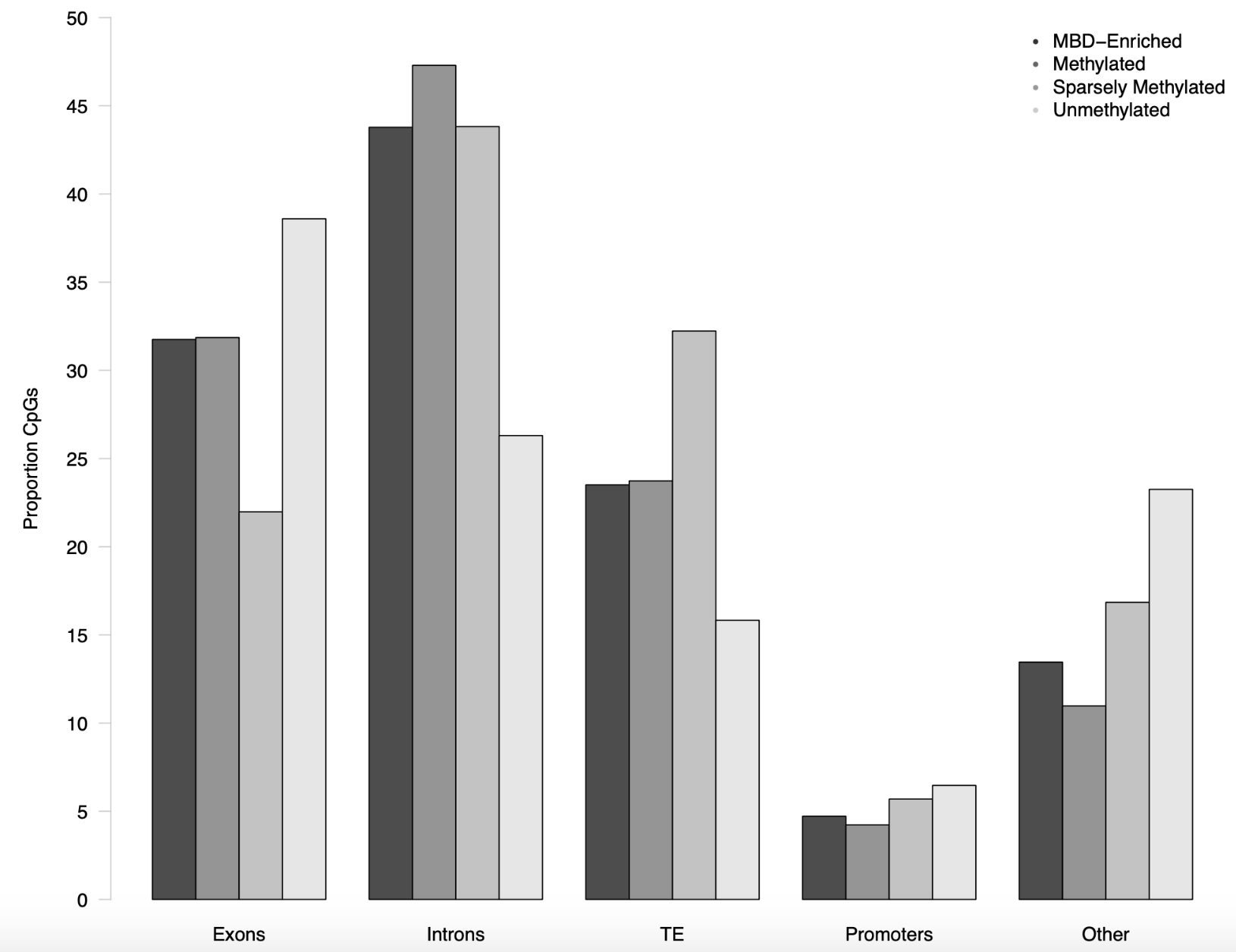 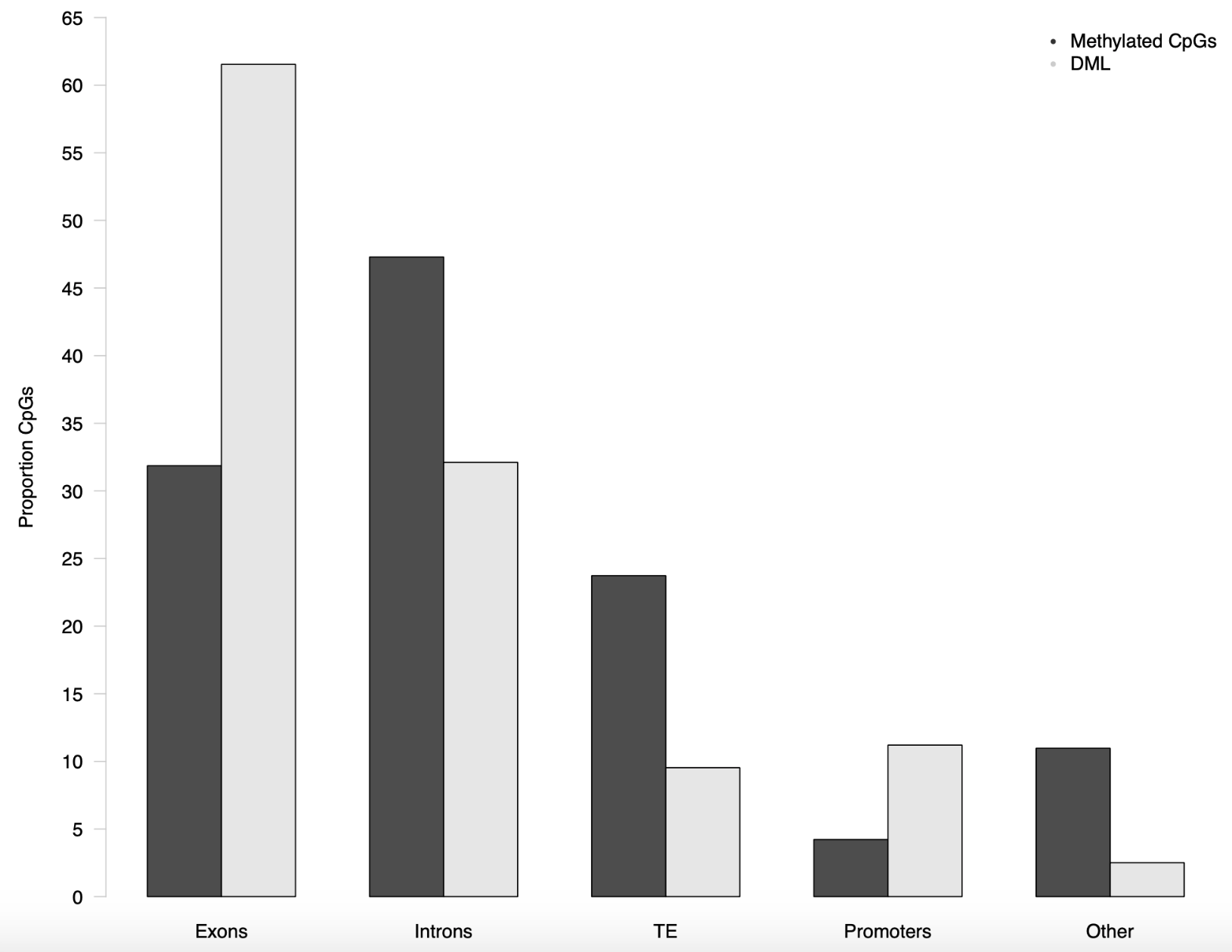 from the responsible grad student http://bit.ly/2Xf7VMt
via IFTTT