I isolated a bunch of tanner crab RNA on 20190430 and Steven asked me to try to figure out some options for RNAseq libray pools.

Using Grace’s table join of my Qubit data (hemo_qub-for-libs.csv), I created a pivot table to quickly get an idea of how things looked (note: I added a column with total RNA yield for each sample – 10uL * concentration): Assuming a minimum of 1000ng is required by the UW’s Northwest Genomics Center (that was the requirement last time we had RNAseq performed by them; have emailed to confirm it’s still required), here are the libraries I think we can/should make.

The “Day 9” samples are named poorly, as these are actually the samples prior to temperature exposures. Thus, the “trtmnt_tank” column (i.e. temperature treatment) in the table above doesn’t really apply. With that in mind, Day 9 samples can only be compared as Infected/Uninfected.

So, by default, those should be two libraries.

Then, we have the Day 12 and Day 26 samples. We can either do Infected/Uninfected OR Ambient vs. Cold, but can’t do both, as there isn’t sufficient RNA…

Admittedly, I’m not sure which aspect of this project was given more weight in the grant proposal:

The answer to that question will guide library pooling.

With that said, if we do the following, we’ll have a bit of both pathogen response and temperature response:

from Sam’s Notebook http://bit.ly/2HlPQXv
via IFTTT

These samples are from Christian and are from animals that were infected with sea lice for the duration of the sea lice life cycle in two different temperatures (8C and 16C) and two different salinities (26psu and 32 psu). Sample info here

Kaitlyn helped with the extraction.

When I asked about statistical tests for characterizing overlaps in this issue, Mac pointed out that some overlap categories for total CpGs were much lower than those for all 5x CpGs. Since total CpGs are the background for all 5x CpGs, Steven suggested I dig into this further. We went back and forth in the issue comments, but I decided to clean some stuff up and make it easier to follow.

In this Jupyter notebook, I downloaded the C. virginica genome file. I used grep to separate out individual tracks for genes, mRNA, and exons. Using subtractBed, I found areas of no overlap between mRNA and exons, and called those introns. I restricted subtractBed using -s to enforce strandedness. Although pre-made tracks are available here, it’s good practice to create these tracks myself so I know how they are made. I counted 38,929 genes, which is similar to the 39,493 genes listed in the NCBI Annotation Report. I counted 60,201 mRNA and 731,279 exons, same as the pre-made tracks. The major difference comes from how introns were counted. The track I generated has 688,167 entries, while the pre-made intron track has 319,262 entries. I’m not entirely sure why this is the case, but figured looking at the track in IGV could help. I used awk to generate BEDfiles for each genome feature track to visualze overlaps more easily in IGV. In this IGV file, I looked at CG motifs, as well as the gene, mRNA, exon, and intron tracks I generated.

By comparing the intron track I generated to the pre-made intron track, it looked like there were some regions that were being properly subtracted, and others that were not.

Figure 1. Screenshot from IGV. From top to bottom, the gene, mRNA, exon, and intron tracks I generated are displayed. The bottom-most track was a pre-made intron designation.

At one point, I thought I had a brain blast and decided to use subtractBed with the gene track and exon track instead of the mRNA and exon tracks. Using this method, I counted 307,088 possible introns, but there were still discrepancies between the pre-made track and my track:

Reading the subtractBed help file, I couldn’t figure out how to solve this issue. I decided to proceed figuring out the code for the next steps while I wait for answers to my questions in this issue.

The last thing I did was look at how many CG motifs overlapped with the genome tracks I created — the source of my struggles. I first compared the number of lines in the CG motif file with a rough count of all CGs in the C. virginica genome. To get my rough estimate, I used the following code:

Difference between gene and mRNA tracks

This screenshot shows some extra genic regions that are not included as mRNA, but are included as exons

Figure 3. Area where gene track has extra information that is included in exons but not in the mRNA track.

My assumption is that coding sequences (CDS) are involved, but I would not expect to have to incorporate CDS into intron generation. This is something to continue investigating.

from the responsible grad student http://bit.ly/2vYyLfI
via IFTTT

Sam extracted RNA using the Quick DNA/RNA Microprep Plus Kit (ZymoResearch) (post). I don’t think there is currently enough RNA in the libraries to reach the requiremets for NWGC… details in post.

Today I quickly joined his qubit result file with the hemolymph sampling data (hemo_table.csv) in R.

The goal is to have 12 libraries accounting for each infection status and temperature treatment. Each pooled library needs to have at least 1000 ng of RNA in a sample of ~50ul. (GitHub Issue #184)

*Note: the temperature treatments didn’t start until after the Day 9 sampling day.

As of now, I don’t think the pooled samples would have enough RNA to meet the requirements… for example, the samples that fall under Library 1 add up to 79.9 ng/ul.

I may need to check this again when I’m not sick.

I had planned to run MethylKit on Emu’s RStudio web interface to find DMRs in the WGBS hemolymph. In reviewing a previous MethylKit R script, I realized I need sorted bam files, which my initial bismark mox script didn’t include. So I submitted a new mox job to sort my bams. Once the job finishes (after Mox maintenance), I will copy the sorted bams over to gannet and then on to Emu so I can run the Rstudio web interface (a little painful, but getting there!).

So I thought it might be easier to install methylpy on the server and do DMR calling with this python program instead of with MethylKit in R. Turns out installing this on Mox was too challenging as I kept getting permission denied messages. So I tried installing it on Ostrich which turned out to also be very challenging. Finally, I got it installed and functioning after correctly installing GSL. I am currently running methylpy DMRfind on Ostrich.

I’m working on writing out the methods done with the broodstock (collection, water chemistry, experiment duration, and timing of sampling). Perhaps a timeline of the experiment would be better represented in a visual rather than a document (or at least condensing the current timelines/logs to one document)? There is a new, separate document now to keep track of the tasks needed to work toward sample analysis/manuscript development for the geoduck samples.

Additionally, I’m attempting to write up results on survival and histology. However, I think it would be best to get quantitative measurements for histology (e.g., oocyte size and % connective tissue). When I trained Eileen on water chemistry, we discussed the possibility of me using the Padilla-Gamiño microscope. I followed up with her and am waiting to hear back. Meanwhile, color deconvultion via ImageJ plugins or Qupath has allowed me to calculate the correct stain vectors to separate out the hematoxylin stained vs. eosin, but I don’t know how to or if I can convert that to percentage/area/pixels to compare those differences. I am continuing to look through literature to best solve this issue and give a more accurate measurement for any developmental differences between treatments shown in histology samples.

I’m also working on measurements of juvenile geoduck that were reared in the hatchery (as opposed to those outplanted in Sequim Bay) based on the images we took. Grace and I took counted survivors, removed dead geoduck and all sand, and attempted to remove any ciliate/algal growth on the juveniles. We hoped that sand removal would slow or prevent detritus buildup, however it looked like nearly all geoduck were affected when we visited the hatchery on May 2.

We also rearranged the heath trays because it appeared that there was uneven buildup on the bottom trays as opposed to the top trays:

The tides are at their lowest point right now so I reached out to Kelly to check on the outplanted geoduck as well. Shelly and I will go out to Pt. Whitney at the end of this week to setup a new pump so we can reduce feed levels for the setters and finish titrating poisoned water samples. Water chemistry may be taken again either that day, or early next week, and I am going to help Shelly extract DNA from sea lice infected salmon skin next week.

I ran this job on mox to align reads to Pgenerosa_v071.

I adapted Sam’s new coverage script to work on my data in this jupyter notebook: 20190503_Pgnr_comparison.ipynb.

It worked! And generated this plot: 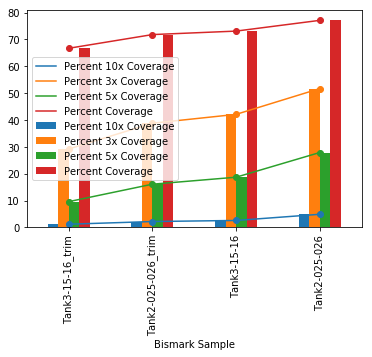 Coverage of genome-wide cytosines is surprising good. Tank 2 got about 66M reads and Tank 3 got about 50M reads. The genome is about 2.4gb. If the genome was evenly fragmented at 150bp and got even coverage, you would need 16M reads to cover the genome 1x. So it’s possible the the depth these libraries got were able to to cover most cytosines.

I don’t think that Bismark outputs unmapped reads unless you specify it in your initial code: https://www.bioinformatics.babraham.ac.uk/projects/bismark/

But when I run alignments again, I’ll specify unmapped reads be output .

I did not consider the min-length option. Last time, considering MINLENGTH:100 was not good. It reduces from 58 million of reads to 35 million…

For this reason, the MINLENGTH is not used.