Steven asked to subset the Pgenerosa_v070.fa (2.1GB) in this GitHub Issue #705. In that issue, it was determined that a significant portion of the sequencing data that was assembled by Phase Genomics clustered in “scaffolds” 1 – 18. As such, Steven asked to subset just those 18 scaffolds.

This was done by using the samtools faidx program.

Process is documented in the following Jupyter Notebook (GitHub):

With my finalized DML, I decided to describe the genes they are in. Steven suggested I start by making tables annotating the genes DML overlap with. Once I realized this would just involve some (hopefully) quick R manipulation, I created a grand plan: 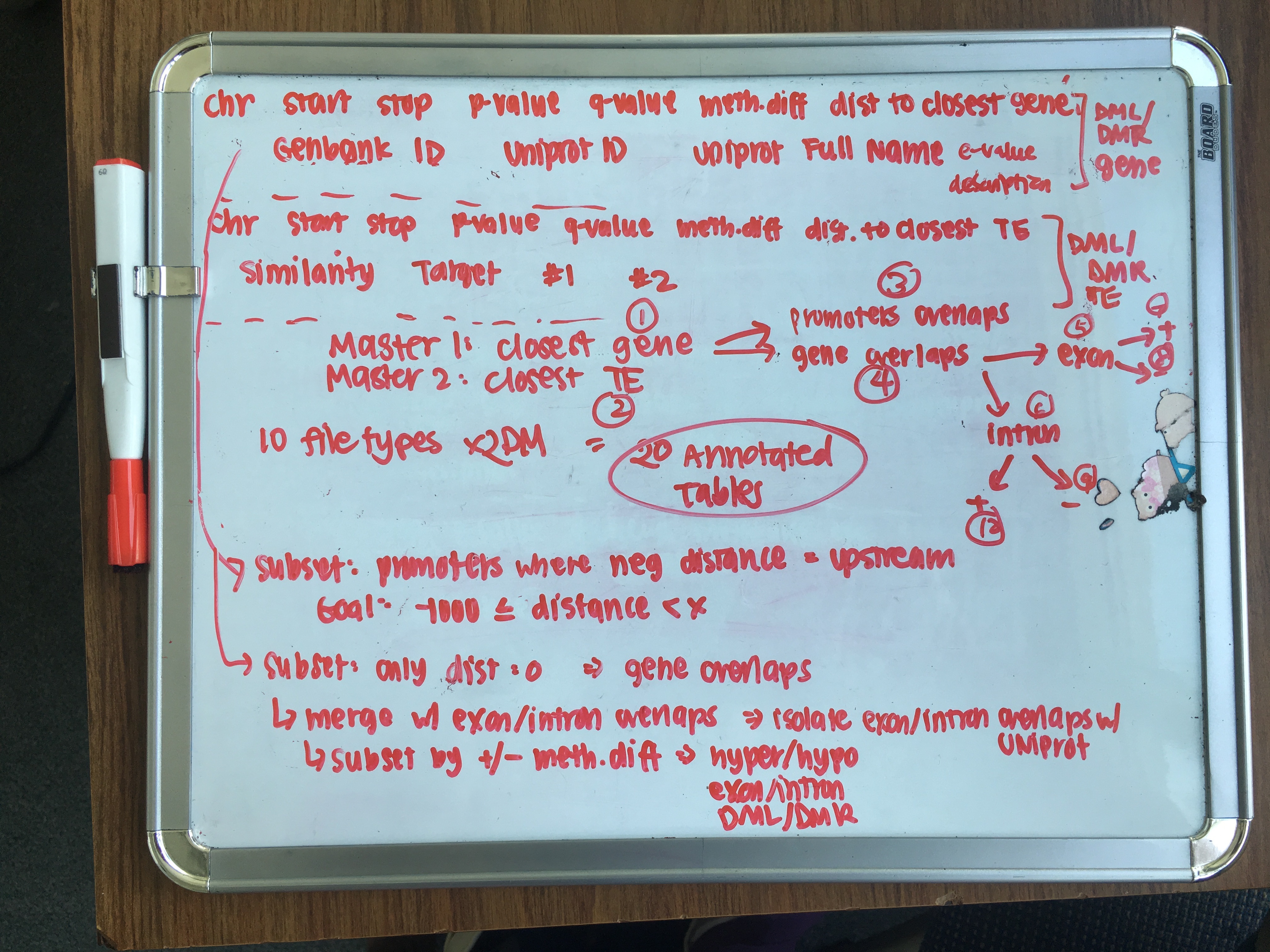 You’ll notice that the grand plan includes DMR…but I’m dropping the DMR. After thinking about it more and discussing the DMR at the Eastern Oyster Project Meeting, I think they’re just artificial and don’t make sense when I have loci-level resolution.

To do this, I first wanted to create a master DML annotation list. Then, I could subset the master list based on overlaps with putative promoters and gene overlaps. I could further subset the annotated DML that overlap with genes into exon and intron overlaps. For all gene, exon, and intron overlaps, I can separate hypermethylated and hypomethylated loci. Separately, I can create a list of DML annotations with transposable elements. Since there are only 57 transposable element overlaps, I don’t think I need to create subsets. Once I found some time to actually work in the midst of summer TAing at Friday Harbor, this R Markdown file and got cranking.

I wanted to create a master list with the following columns:

I started with my DML csv file and merged that with the information from closestBed. To get this merge to work, I needed to switch the positions of my DML and genes so closestBed would report the closest gene to each DML, and not the closest DML to each gene in this Jupyter notebook:

When I imported the dataset into R, I had to subtract 1 from the start position and add 1 to the end position so it lined up with the DML list. I merged the two files by DML start and end positions.

The next file I wanted to add to my master dataset was the gene list. I easily imported the gff3 with read.delim, but my challenge came from sorting through the last column with gene description information. I usually use Excel Text-to-Columns for this, but I decided I needed a reproducible bash-wizardry method.

First, I cut the column with the gene descriptions and replaced ; with \tab using awk and gsub:

I imported the column number file into R and found the maximum number of columns was 9 with max. I set col.names in read.delim to accomodate 9 columns:

I wasn’t done yet! I ended up with gene IDs in a column, but there were extraneous characters before the actual ID that I did not need. I removed these with gsub:

Now that the geneID column was clean, I added the column to my gene list (I just created a dataframe, but I now realize I could have used cbind). Finally, I merged the revised gene list with isolated gene IDs with my master list.

The gene list has gene IDs, but the Uniprot codes I have are matched with Genbank IDs from an mRNA file. The next intermediate step is to merge then mRNA list with my master list. Once again, I started by isolataing the mRNA description column with cut and using awk and gsub to replace “;” and “,” delimiters with “\t”.

In addition to getting gene and Genbank IDs, I wanted to get mRNA product descriptions from the amalgam of information in that description column. Since each row can have a different number of delimiters, I decided to use cut and awk with gsub to essentially set a custom delimiter. The products are denoted after “product=”, so I set this as my new delimiter. This created a bunch of garbage in one column, and then product information and garbage in a second column. I then piped the that output into another cut command, where I isolated the second column with the product information. I used another awk and gsub to change “;” delimiters to “\t”. My final file, found here, has products in the first column, then garbage in any remaining columns.

Just like I did previously, I counted the number of columns and imported the file with read.delim and the appropriate number of col.names. I then isolated the first column with product descriptions, and appended that to the mRNA list with gene IDs and Genbank IDs. Finally, I merged the massive mRNA list with the master list.

Finally, I’ll merged the working master with Uniprot codes by matching Genbank IDs. This was the easiest step. I reorganized the columns and ensured I didn’t have any duplicate entries by using distinct in the dplyr package. I exported the file as this .csv.

The dist-to-closest-gene column has base pair distances from DML to the closest genes, but I defined my putative promoter regions as 1 kb regions upstream of transcription start sites. Even though my dist-to-closest-gene column has important information, I need to look at distances between DML and mRNA. I quickly detoured to this Jupyter notebook to rerun intersectBed. When I originally created my overlap files, I wrote out information from only the flanks without matching DML. I changed the -wb argument to -wo to get information from both files in the output. I then imported the DML-promoter overlaps and merged that with the master annotation list by duplicating the column with the end of the promoter and naming it the start of the mRNA. I saved the annotated DML-promoter table here.

I went through a similar process for the DML-TE annotation. I imported the DML-TE overlap file. I also revised intersectBed by swapping -wb for -wo and producing this Gene-TE overlap file. I merged the documents by TE start and end positions, then merged the resultant output with the master table. Similar to the other tables I created, I retained all rows from the original overlap file I was interested in and removed any duplicate rows (merging artifacts) with distinct. The DML-TE annotations can be found here.

And that’s how you end up with an R Markdown file that’s close to 600 lines long just to subset some files. Join me tomorrow for “how the heck to I adequately describe this” and “will a gene enrichment yield interesting results.”

from the responsible grad student http://bit.ly/2KDvqMg
via IFTTT