Steven posted an issue on GitHub regarding splitting a FastA file into multiple sequences. Specifically, he wanted a single, large FastA sequence (~89Mbp) split into smaller FastAs for BLASTing.

I downloaded the FastA he provided (https://d.pr/f/UlzHLR) and split the sequence into 2000bp chunks using the faSplit program (https://ift.tt/2Znl0nP

In our continuing quest to wrangle the geoduck transcriptome assemblies we have, I was tasked with compiling assembly stats for our various assemblies. The table below provides an overview of some stats for each of our assemblies. Links within the table go to the the notebook entries for the various methods from which the data was gathered. In general:

In continued attempts to get a grasp on the geoduck transcriptome size, I decided to “compress” our various assemblies by clustering similar transcripts in each assembly in to a single “representative” transcript, using CD-Hit-est. Settings use to run it were taken from the Trinity FAQ regarding “too many transcripts”.

A bash script was used to rsync files to Mox and then execute the SBATCH script.

In-flow hose was not going directly into the heath tray insert in H2T1:

Tried to break up algae and clear mesh to improve flow of food and shuffled trays around to new order:

*only swapped H2T3 with H2T1 because these trays showed the biggest size differences.

*Left H2T6 and H2T2 in same positions because they had a lot of die off and aren’t going to be part of the experiment.

Size data (photos) for all animals are here. Size ranges for all are about 2-6mm. I will do individual measurements with image J

Survival and size data for larval rearing through now I think is too convoluted to draw conclusions from parental exposure.

Prior to pH x temp experiment, I can size select to start with animals of similar sizes across the board.

Homogenized and frozen larvae to prep for RNA isolation, and aliquoted larve in ethanol for imaging/measuring at a later date. These larvae were collected during spring 2017, captured on screens upon release from mother, concentrated into microcentrifuge tubes, and placed immediately into a -80 freezer to preserve. Larvae in the same tube are likely to be full siblings or half siblings; the number of larvae collected on that day / from that collection bucket is a good indication of whether more than one female released brood that day (we expect ~200k larvae/female).

First step is homogenization, which is particularly necessary due to larvae having shells that need to be broken up. As with the ctenidia samples, I used mortar+pestle and liquid nitrogen. I pre-portioned 1 mL of RNAzol into microcentrifuge tubes, and transferred up to 100 mg homogenized larvae into chilled RNAzol. NOTE: I tried to get as much tissue as possible up to 100 mg, since the larval shells likely comprise a significant percentage of the mass.

In total I have 83 larval samples. I isolated RNA from 14 of these samples in spring 2018 for the test QuantSeq round. A few resulted in too little RNA, 2 of which had sufficient larvae remaining for another attempt to isolate RNA. So, I homogenized a total of 70 samples into RNAzol in 10 batches (~4 days of work), with an additional 2 controls (just liquid nitrogen ground into mortar+pestle).

Did a first round of RNA isolation (n=12, batch #1) to test protocol. Followed RNAzol protocol like with the ctenidia samples, with two exceptions: 1) after addition of DEPC-treatetd water (0.2 mL), centrifuged at 16,000 rcf (not 12,000); 2) added 100 uL DEPC-treated water in last step to dissolve RNA. Samples in this 1st batch: ABCDEFG

Also of note: after precipitating the DNA/proteins, the supernatant retained a black/gray color. Then, after adding isopropanol, the RNA pellet was predominantly black in 10 of the 12 samples (the 2 samples with small, white pellets were X and Y). Then, upon dissolving RNA in the DEPC-treated water and vortexing for 5 minutes, there was a black substance that settled into the bottom of the tubes. A black substance occurred before, in 2018 when I did a preliminary round of RNA isolation from the same study’s Oly larvae (see notebook post); this didn’t seem to interfere with the successful QuantSeq run.

I quantified RNA concentration in this first batch, using 1 uL of the RNA solution, pulled from the surface of the solution to avoid the black substance. Measured RNA in all samples, at a concentration of between 30-90 ng/uL. 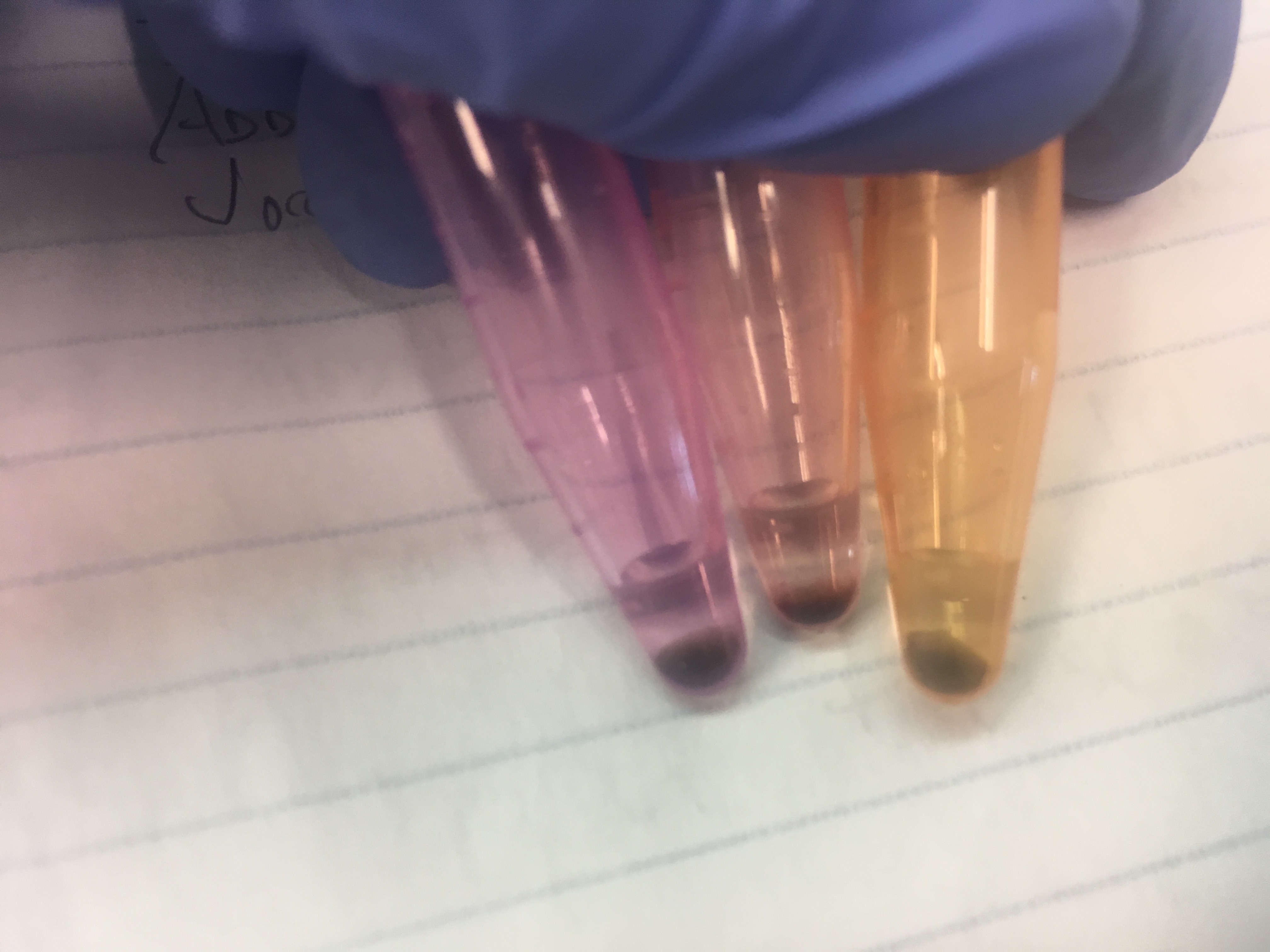 Image of RNA dissolved in water, showing a black substance settled at the bottom of the tubes. 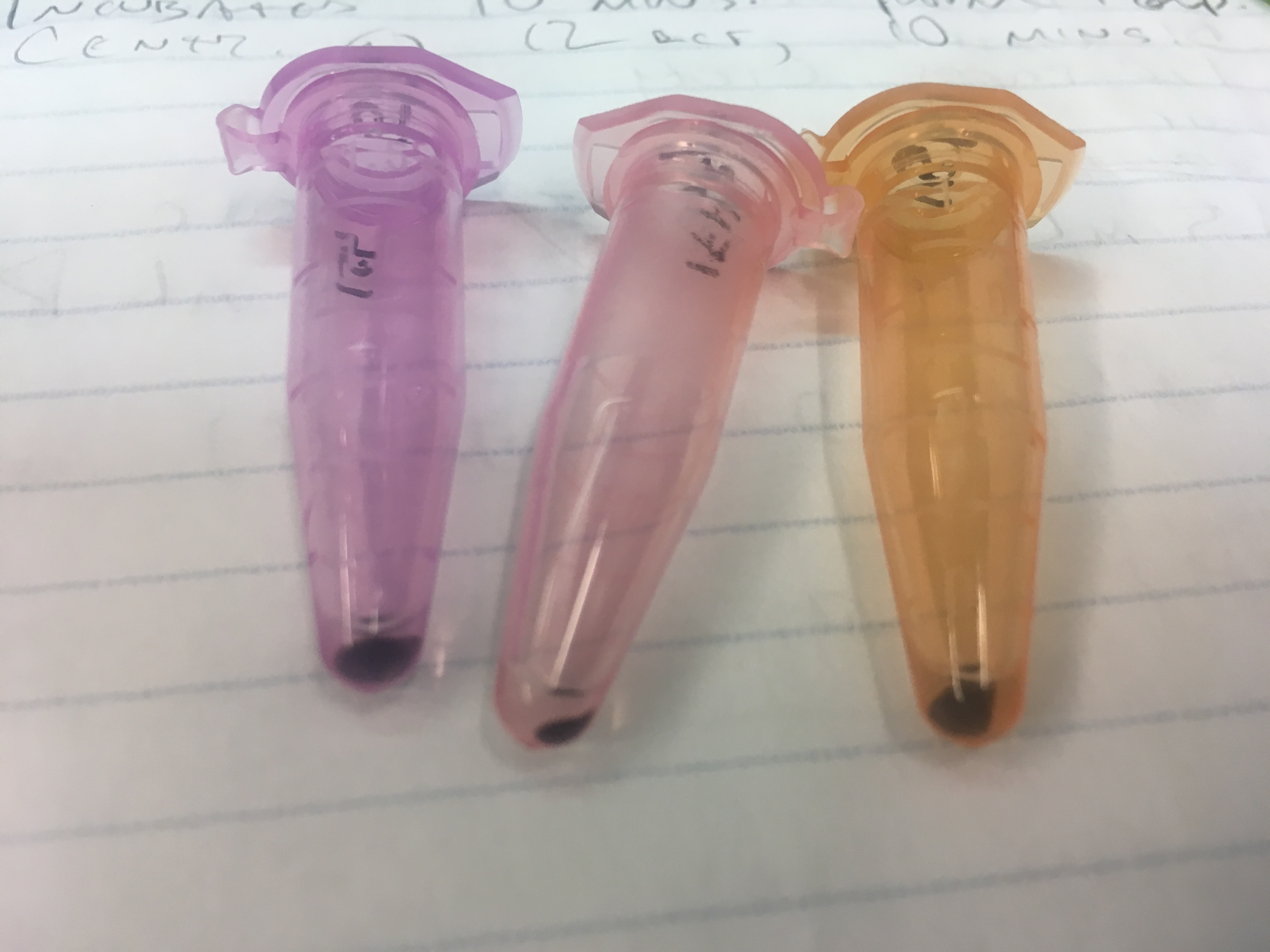 Big day of RNA isolation – did 4 batches of 12, but processed 2 batches simultaneously, offset by about 10 minutes. This was feasible because there is down time during reactions/centrifuging.

Batches #2 and #3 (run simultaneously offset), followed the same protocol as with batch #1 (above), with one exception: added 75 uL of DEPC-treated water in final step to dissolve RNA.

Batches #4 and #5 (run simultaneously, offset), followed same protocol as batches 2 & 3, with one exception: did not vortex homogenate prior to transferring 500 uL to new tubes with the 200 uL DEPC-treated water. The resulting RNA dissolved in water had significantly less black substance, likely due to this adjustment.

from The Shell Game https://ift.tt/2GCINc3
via IFTTT

Essentially, the steps below (which is what was done here) are needed to prepare files for use with Stringtie:

This was run on Mox.

The SBATCH script has a bunch of leftover extraneous steps that aren’t relevant to this step of the annotation process; specifically the FastQ manipulation steps. This is due to a copy/paste from a previous Hisat2 run that I neglected to edit out and I didn’t want to edit the script after I actually ran it, so have left it in here.

This is the first step in getting transcript isoform annotations. The annotations and alignments that will be generated with Stringtie will be used to help us get a better grasp of what’s going on with our annotations of the different Panopea generosa genome assembly versions.

Essentially, the steps below (which is what was done here) are needed to prepare files for use with Stringtie:

This was run on Mox.

The SBATCH script has a bunch of leftover extraneous steps that aren’t relevant to this step of the annotation process; specifically the FastQ manipulation steps. This is due to a copy/paste from a previous Hisat2 run that I neglected to edit out and I didn’t want to edit the script after I actually ran it, so have left it in here.

Took about an hour to run:

The Hisat2 index files are: *.ht2. These will be used with Stringtie for transcript isoform annotation.

from Sam’s Notebook https://ift.tt/2JMm9jt
via IFTTT

Things I did at FHL that were not my research

For the past five weeks, I’ve been at Friday Harbor Laboratories as a Teaching Assistant for the Ecology of Infectious Marine Diseases course! I thought it would be good to recap what I did, since I was working but didn’t have time for my own research. In addition to finding lab equipment and helping out with fieldwork, I gave some lectures, helped students with a genomics project, and spearheaded the formal science communication section of the curriculum.

For my first lecture, I taught students about Github and basic Linux commands. I had students navigate to this Github repository and clone it to their machine. I then walked through the steps I laid out in this document. I had students learn to change their working directory and navigate through directories using the command line interface. I opened up a Terminal window and placed a Finder under it so students could see how the commands I typed in the Terminal changed directory structure and files. I also emphasized the use of tab-complete to make things easier and avoid typos in code. The next set of commands I walked through involved downloading FASTA files from web links. Looking back on it now, I probably should have taught them about checksums, but I think their brains may have exploded a bit. I had them create new directories, move FASTA files into directories, and remove extra files. Finally, I went through commands to explore files from the command line.

Later that day, I taught them how to blast from the command line! I wanted them to type the code themselves, but we were unable to download blast on the computers in the Computer Lab. I walked through the code in this document so they could try reviewing it themselves later. What was more useful for them was going to the Uniprot SwissProt database and teaching them about the database and how to get GOterms.

At the end of our genomics block, I gave a lecture on my own work! Since Colleen focused on transcriptomics, I used my work as case studies on the use of proteomics and epigenetics to study how abiotic stressors affect organismal physiology. Students were really interested in specific methods, so I added in a lot of detail. I think those extra details may have prevented some students from seeing the big picture. I’ll need to work on that if I give that lecture again.

A large component of the course was working on projects. For the project examining NIX prevalence in Kalaloch Beach razor clams, I assisted students with DNA extractions and qPCR. I spent most of my time assisting with the transcriptomics project looking at eelgrass wasting disease host-pathogen interactions. I created this Jupyter notebook to merge transcriptomic data with blast output and Uniprot Swiss-Prot annotations. I also streamlined isoforms into genes. In this R Markdown file, I formatted input files for gene enrichment with GO-MWU. I used the GO-MWU pipeline for eelgrass and pathogen transcriptomic data, but only found two enriched GOterms for eelgrass. I also created this R Markdown document to help students create heatmaps of differentially expressed genes. They used the code I created to create their own heatmaps for genes of interest. I think any molecular method is difficult to follow if you have little to no experience, and if you don’t have a great understanding of R or Linux. One thing that (I think) helped while I was teaching was to constantly remind students the purpose of each step.

The other part of the course I helped with was science communication practice. Students were required to write one blog post for a public audience and create a short talk about a disease for the class. I worked with each student on their blog post and provided targetted feedback when editing their initial drafts. I also had students give practice presentations to me so I could help them if they needed. Most of my comments were directed at improving the organization of their pieces or talks. I took it upon myself to help them outline their final papers and reviewed their final presentations so they would not have similar issues.

Overall TAing at FHL was a lot of work but really rewarding! I learned a lot about what it means to be a good instructor and I cannot wait to flex those skills soon.

from the responsible grad student https://ift.tt/2y1cqir
via IFTTT

copy the salmon genome and sea lice genome to mox

copy data from Gannett to owl