I was working through my discussion outline, but was unsure what to make of the lists of parent GOterms I matched to DMG and genes with DML. Steven suggested I look at GOslim terms instead.

I used this Jupyter notebook to get GOslim terms for transcripts. I created separate lists for biological processes and molecular functions. I returned to my DML gene enrichment and DMG gene enrichment to figure out which GOslim terms go with DML and DMG. To do that, I merged GOslim terms with GO-MWU output, then counted the frequency of each GOslim term present. Here are the resulting tables:

I’ll take the categories with the most transcripts and start there for a discussion.

from the responsible grad student https://ift.tt/2ZjX88G
via IFTTT

The QuantSeq run I am prepping for will look at gene expression in O. lurida larvae, which were produced by adults that had previously been held in varying winter temperature and pCO2. All larvae were collected and frozen within a day or two of being released from the brood chamber, therefore they should all be at the same developmental stage. The size upon release, however, could be slightly different depending on the larval growth rate, and if larval release is triggered by something (e.g. food, tank cleaning). Since larval size could correspond with developmental stage which impacts gene expression profiles, I measured all the larvae that will also be sequenced.

While homogenizing frozen larvae with mortar + pestle, I preserved some of the larvae in ethanol, held in a fridge. To measure, I used the Nikon camera + microscope in Jackie’s lab, and the NIS-Element software’s automatic measurement capabilities. Steps:

When measuring objects, it’s important to do quality control – some larvae should not be included since they are at a weird angle, or tissue/junk is included in the auto-generated object, thus making the measurements erroneous. After doing this QC, I exported 2 images simultanously: 1) microscope image without any annotations, layers, etc.; 2) binary layer showing objects that were measured, object IDs, and scale bar. It took me a long time to figure out the software, which I don’t think is very intuitive. I made a screen recording of the process – check it out:

I measured at minimum 50 larvae from each of my 58 larval sample. Here are some quick and dirty plots of MaxFeret90 (aka shell height) and MaxFeret (aka shell width): 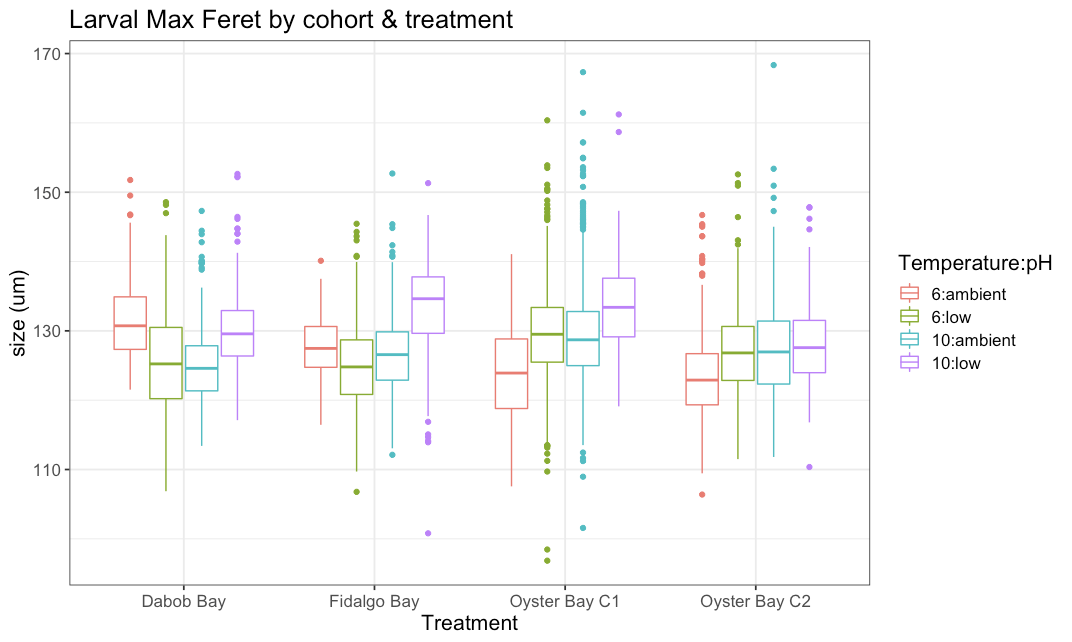 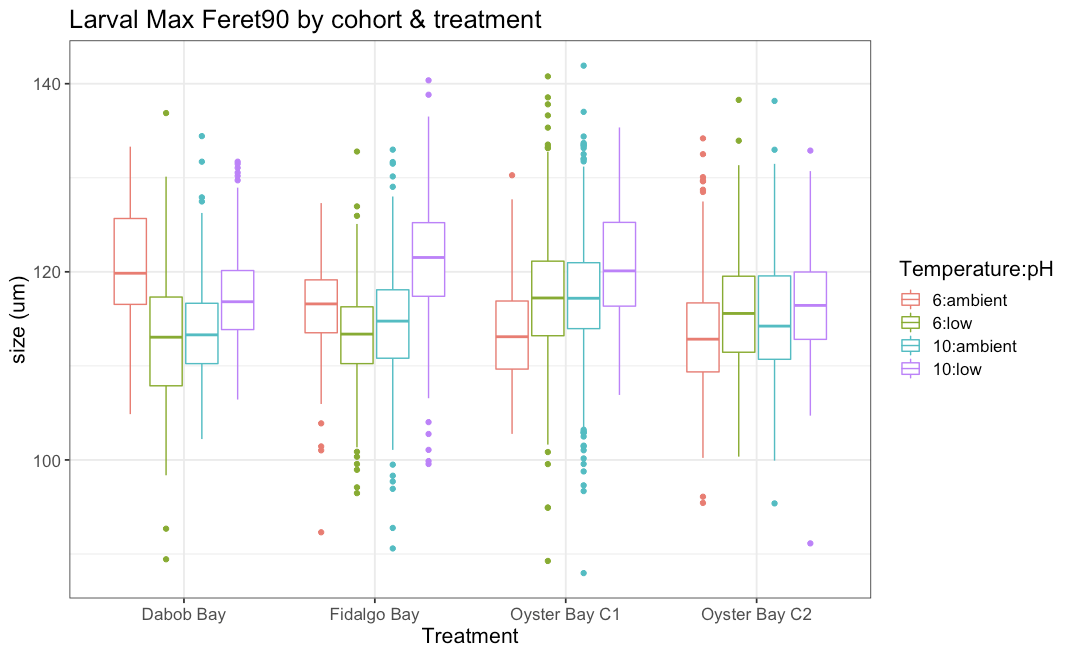 I need to measure the following larvae – missed these since I already had RNA:

from The Shell Game https://ift.tt/2L8hesv
via IFTTT

In preparation for a paper we’re writing, we needed some summary stats on the various genome assembly feature sequences. I determined the max/min, mean, and median sequence lengths for all the GFF feature files we currently have for Pgenerosa_v070, Pgenerosa_v070_top18_scaffolds, and Pgenerosa_v074. This info will be compiled in to a table for the manuscript. See our Genomic Resources wiki for more info on GFFs:

Calculations were performed using Python in a Jupyter Notebook.

I talked to Shelly about my non-significant results. She said I could use uncorrected p-values in my results and argue that this is an exploratory study, just like she did with her crab metabolomics paper. I returned to my R Markdown script to do just that.

Returning to the Kruskal-Wallis statistical output, I subsetted genes with uncorrected significant p-values — my DMG. I then added annotation information to the DMG, including Uniprot Accession codes, GO terms, and methylation differences. I repeated this process with DMG with DML. There are 223 DMG and 6 DMG with DML! I saved the annotated DMG here and annotated DMG with DML here.

Gene enrichment time! I generated a GO annotation table and table of significance measures using signed log p-values from Kruskal-Wallis tests. All genes were used; not just those that are DMG. I noticed that half of the genes in the GO annotation table did not have associated GOterms. Unsurprisingly, there were no significantly enriched parent GOslim terms for biological processes, cellular components, and molecular function categories. I counted the frequency of parental GOslim terms for all genes tested and for DMG:

from the responsible grad student https://ift.tt/2PgXhVN
via IFTTT

I’ve been working on finally wrapping up the 2015 Oysterseed DIA project. I feel like I’ve tied off the paper fairly well this past week, and have been working on cleaning up and organizing the repository today. Details in post.

I’ve cleaned up some old comments, added some more details in the captions, and double checked all of the links and protocols.

I deleted some extra files that were never used for anything related to the final paper, and added information to all of the readme.md files. I still have some tasks to finish up, as noted by my notes (my “to-do” items are boxed in orange):

After messing around with code to annotate coverage files with gene information, I finally have files I can work with to do some number crunching in this R Markdown script.

I wanted to use a shortcut to import multiple files at once, but I quickly found out that doing so makes it impossible to include additional arguments with read.delim or read.table. Additionally, the original coverage files were not tab-delimited, so I had tab and space delimiters in my files! I decided that the best thing to do would be to format, then import.

The first formatting issue I tackled was the fact that the original coverage files had space delimiters instead of tab-delimiters. Importing files with multiple delimiters into R, or trying to separate columns once imported, seemed hellish. I went to my code to create the join key. Instead of printing all columns in the file as-is after creating the new column, I specified tab delimiters between columns:

I re-joined my files and was ready to tackle the second issue: column headers. When I tried importing all 10 files at once with list2env (more on that below), I couldn’t modify arguments of read.delim. Instead of messing with R code, I decided to add headers to each file. The minds at Stack Overflow suggested a few workarounds. I tried to keep column names consisent between previous versions of the files. Between each column name, I typed \t to include tab delimiters.

Finally, I was ready to import files into R! Instead of importing 10 files separately, I wanted to import them all together. Once again, Stack Overflow helped.

The code allowed me to import 10 files at once and condense the file names (let’s be real they were informative but super long and annoying). I removed extraneous columns for each sample.

This step was pretty straightforward! I looked at Hollie’s code and found she used aggregate. I did too:

The resultant data frames had geneID and percentMeth. It was annoying that 1) I can’t figure out a way to loop through this command for all 10 samples and 2( all of my gene annotations were gone, but oh well. I guess I can add that in later.

The not-so-straightforward part: making sure every gene is listed in both dataframes. I realized that each dataframe had a different number of lines, or gene IDs. I used a series of merge commands to ensure that I had all gene IDs common between all 10 samples. Again, frustrating that I can’t do this in a loop:

There are 11,622 genes with data for all 10 samples, meaning I shouldn’t have any missing data for my statistical tests. I subsetted the gene ID and each sample’s percent methylation columns to create individual dataframes for each sample. After changing column names, I added the sample number and treatment in different columns. Finally, I used rbind to create a dataframe with geneID, percentMeth, sampleNumber, and treatment information for all 10 samples. I saved the file here.

Liew et al. checked normality and variance assumptions before performing a t-test. Since I did MBD-BSseq, which biases towards highly methylated regions, I’m pretty confident my data will not meet a normality assumption.

My raw data is most definitely not normal if I looka t a histogram: 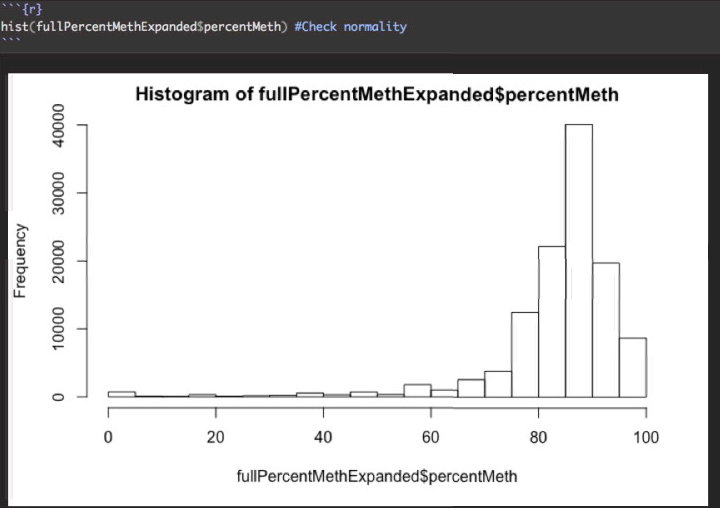 To deal with the left-skewness, I applied separate log, square root, and cube root transformations to see if any of them look better: 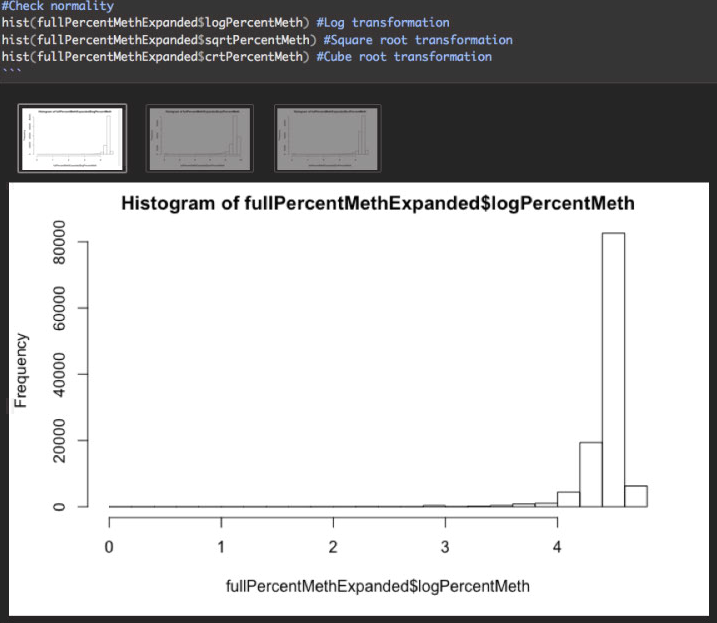 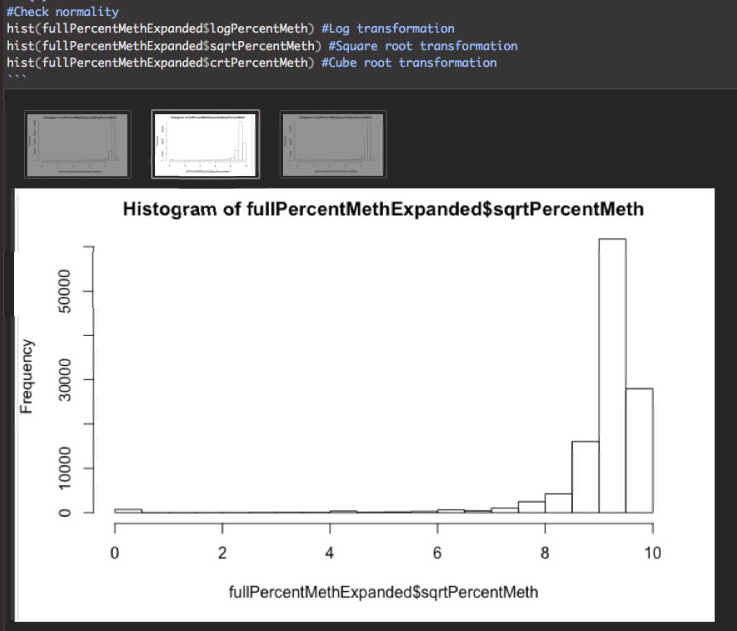 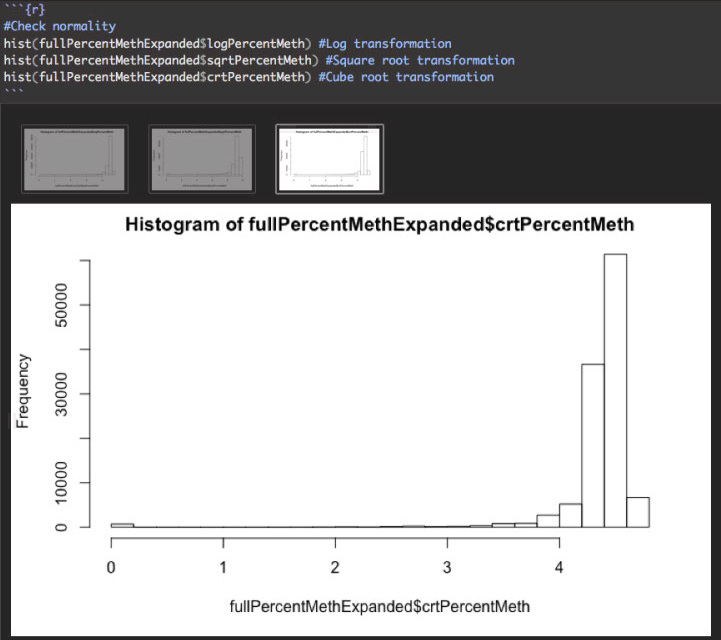 While the log transformation looks the best, it is still left-skewed. I decided to use the non-parametric Kruskall-Wallis test instead of a t-test. I chose Kruskall-Wallis over Mann-Whitney because I do not have paired data.

I decided to use kruskal.test in R to conduct the Kruskal-Wallis test. I took a quick peek at the example:

I needed to isolate my ambient and treatment samples in different dataframes to follow this method. After sorting the dataframe by geneID then treatment, I used subset to create dataframes for each treatment.

For kruskal.test, I thought the best approach would be to loop through the dataset by geneID, extract the chi-squared statistic, df, and p-value from each test, and save the output in a new dataframe:

I then used adjust.p to apply a Benjamini-Hochberg correction to my p-values to control for a false discovery rate. When I looked at the range of my adjusted p-values, none of them were significant! I’m a little bummed, but it’s not surprising seeing how I did over 10,000 comparisons. I saved the output of my Kruskal-Wallis tests here.

After I looked at my statistical test results, I had a mild panic that the mRNA start and end positions I used to annotate coverage files biased what loci were included. I thought there could be a chance intersectBed matched CpG loci with gene and mRNA positions. I removed the mRNA information from my annotations and reran intersectBed. I counted the lines of the resultant sorted and joined files. They did not differ from the counts I previously had, so I put that mild panic to rest and reverted to including mRNA positions in my files.

I thought an easier, and perhaps more meaningful way to pare down my list and see if it had an effect was to only look at genes with DML. I extracted unique geneID from my DML list and merged that with my kruskal.test results. I then applied a Benjamini-Hochberg correction to the p-values from the 481 genes. None of the adjusted p-values for genes with DML were significant (I saved a separate file here). My paper will focus solely on the DML.

Speaking of which…time to WRITE!

from the responsible grad student https://ift.tt/30vDeUD
via IFTTT