Things to note about the QuantSeq libraries:

NOTE: for each of STAR, Bowtie2, and Salmon I tested various combinations of settings to try to optimize alignment rate. More details on that later. 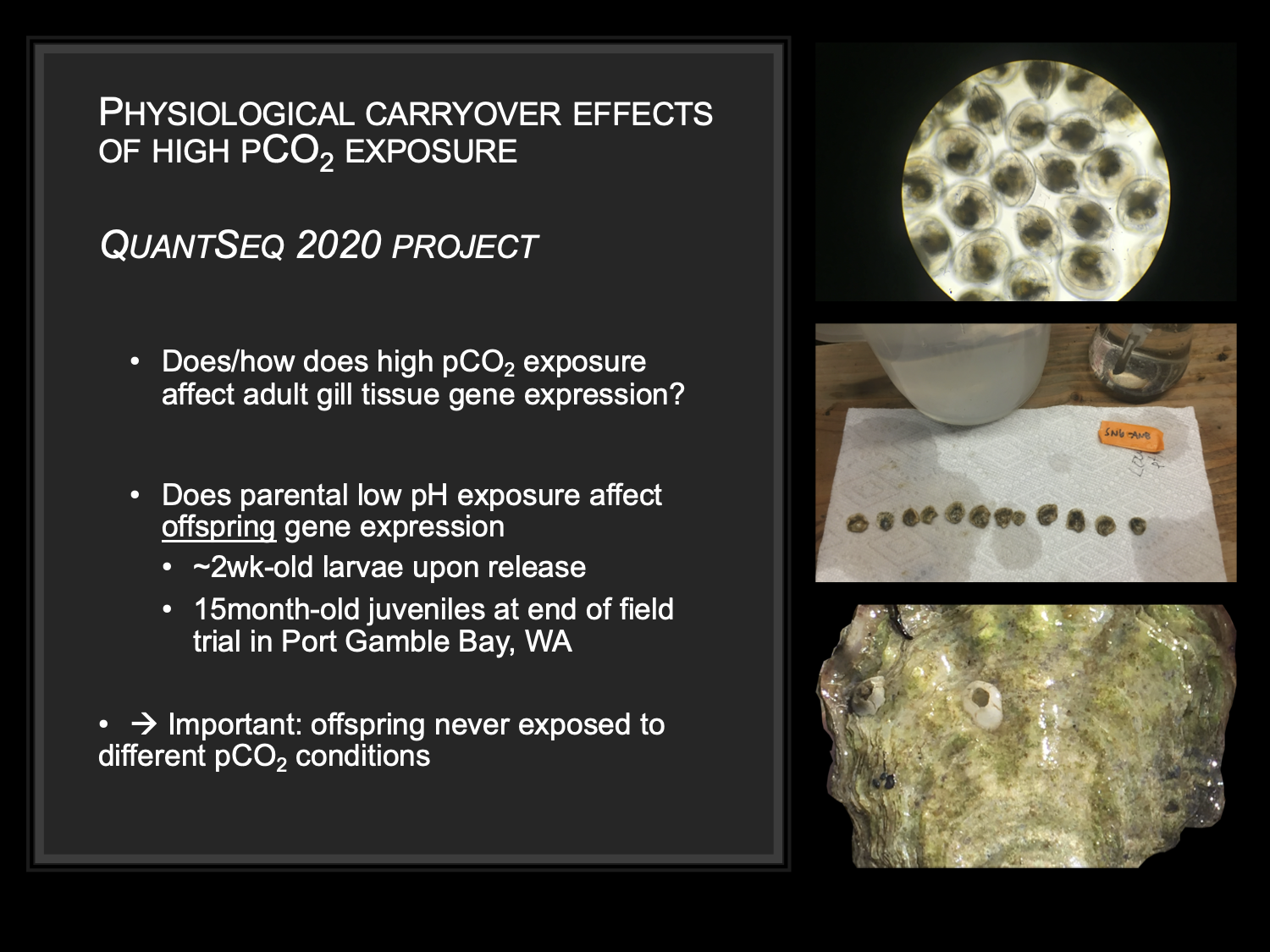 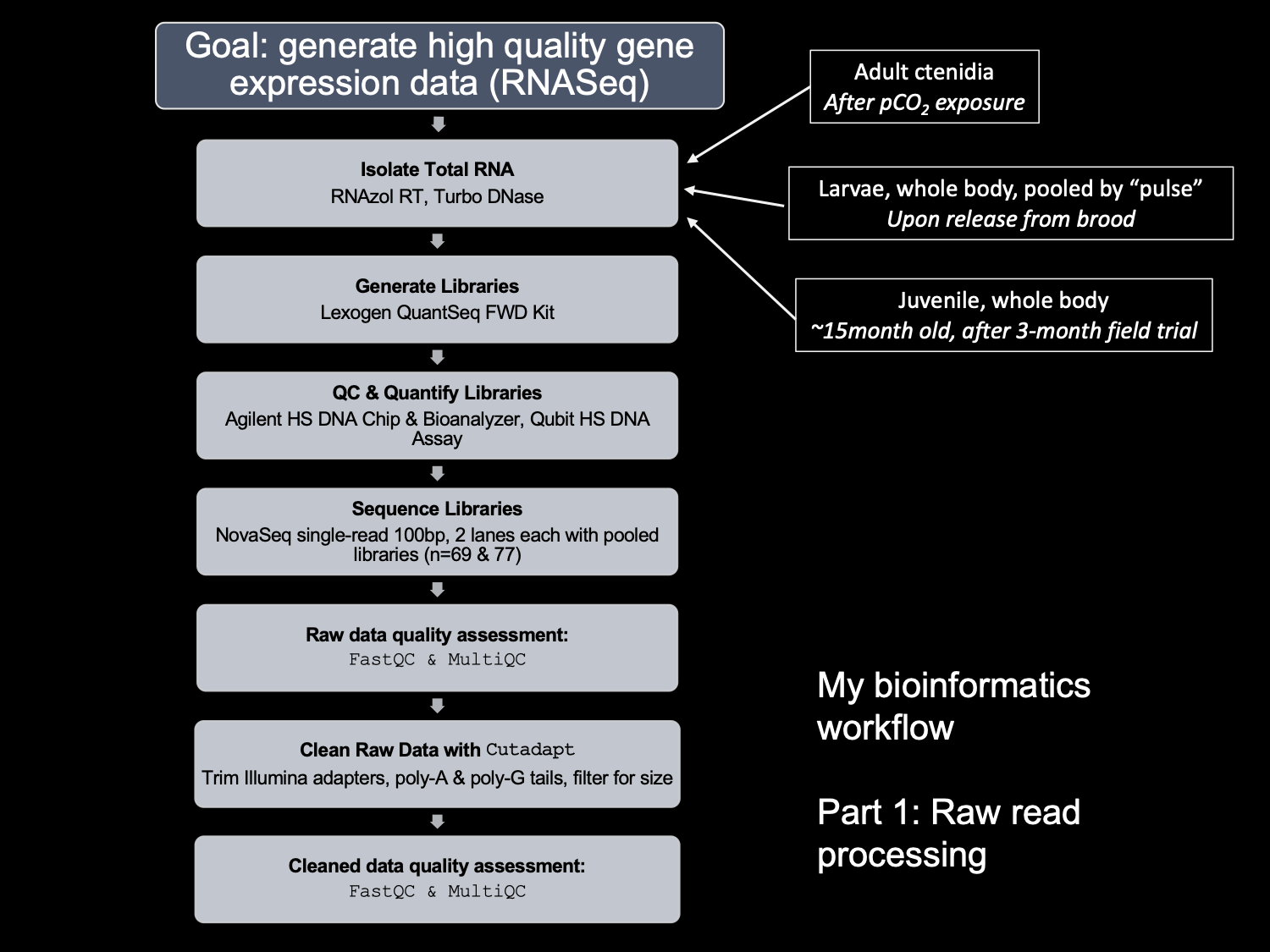 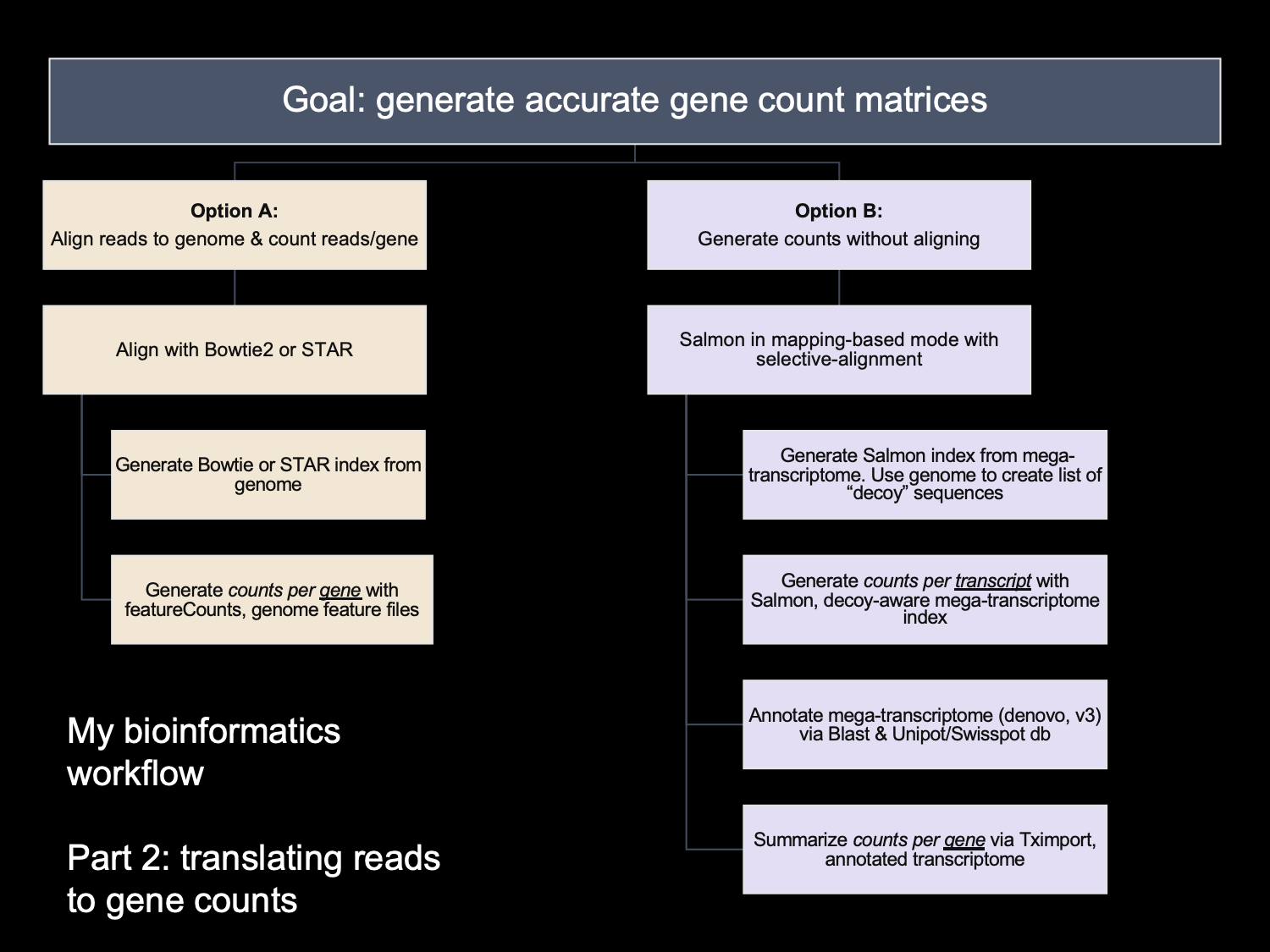 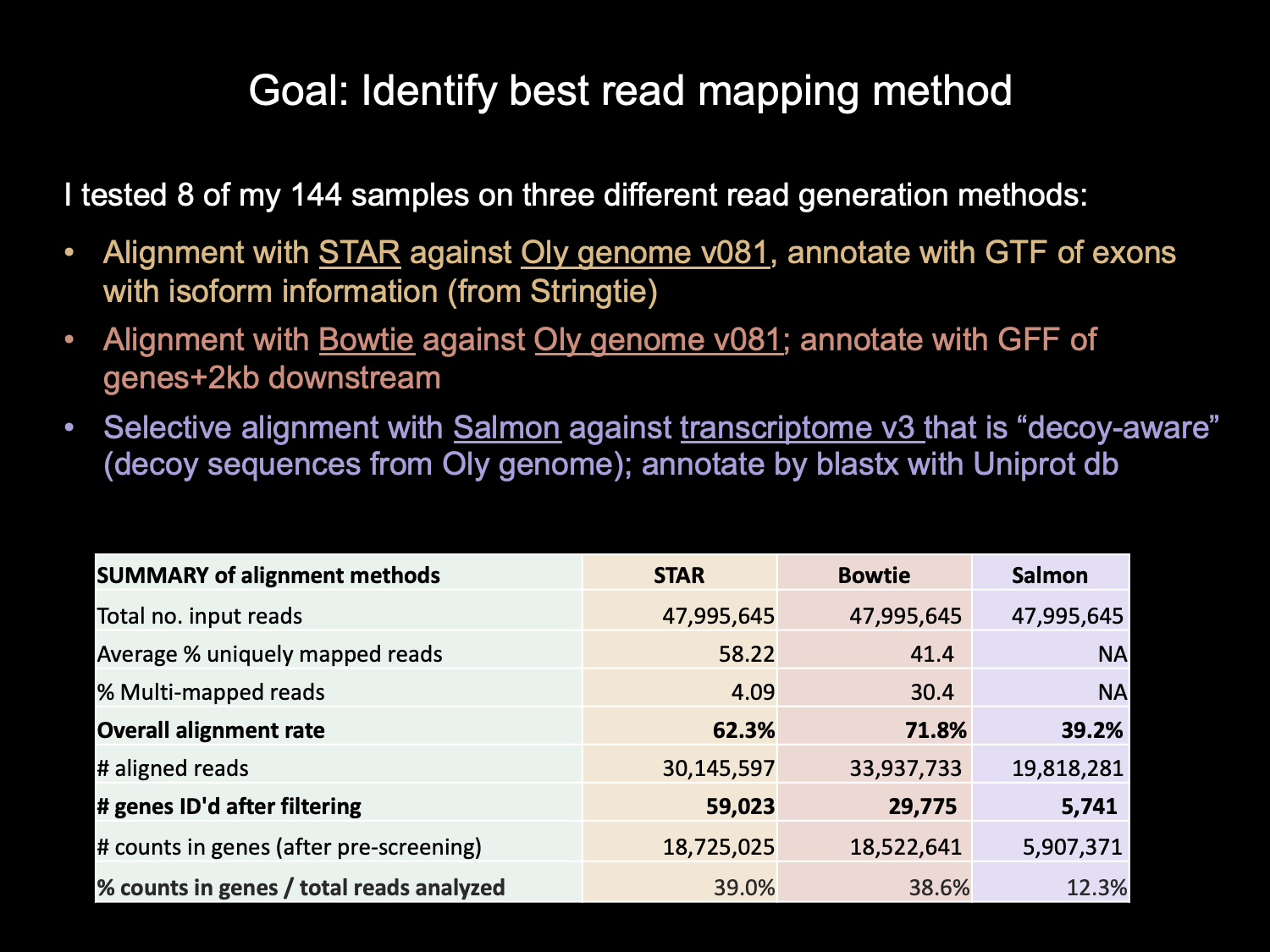 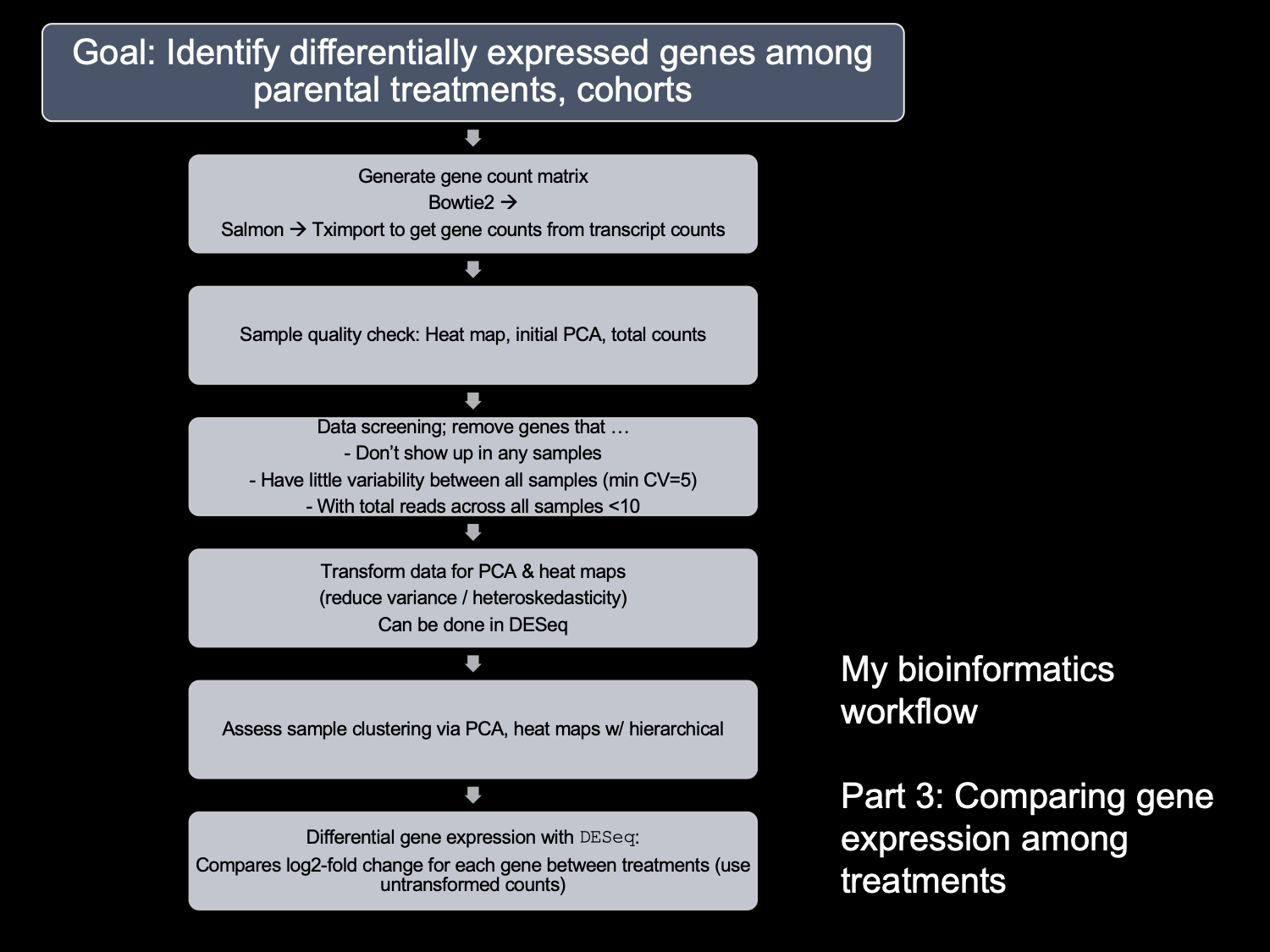 Some notes on mapping QC

from The Shell Game https://ift.tt/2ydDgrs
via IFTTT

Erica at the NWGC worked very quickly to get my samples sequenced on the NovaSeq. On Monday she pooled them and ran each pool on the Bioanalyzer. Here is the bioanalyzer report, and a note from Erica about the pool concentrations:

Here is the QC: I did dilute an aliquot of the pool down further to run the samples better. The original qubit pools were as follows and these were what was loaded on the bioanalyzer.

The diluted qubit values are:

Once the samples were finished on the NovaSeq, she sent me a summary of the run, and files for each pool with the # reads per sample:

I received a link to the raw data, which is not yet demultiplexed (I will need to do that). The data is stored on Globus.org. I will need to transfer it from there to the Nightengales directory on Owl in the O. lurida folder, which is where all raw NGS data is housed for the Roberts Lab. This could be done in a few ways, but I will follow Shelly’s lead, with a few changes based on my work-at-home situation. She directed me to this notebook post, and this github issue as references. Globus endpoints are set up via a GUI, so since I am working at home I opted to tranfer the files to my external hard drive, and then to other locations.

I mounted Owl on my computer using Finder –> Go –> Connect to Server. I entered owl’s address (afp://owl.fish.washington.edu), then my username and pw.

from The Shell Game https://ift.tt/3bA9yLQ
via IFTTT

I’m done with my QuantSeq libraries! After getting a few quotes for sequencing, we’ve decided have the UW Genome Sciences sequencing core do it (the Sequencing Northwest Genomics Center). They also pooled my libraries for me for a small fee, but I needed to provide them with library concentrations (from QuBit). I also sent them my BioAnalyzer results (mean library length).

On Friday, April 17 I prepped my samples and walked them over to Erica at the genome science center. Here’s what needed to be done:

I had to quantify my juvenile O. lurida libraries, and a couple random libraries that I previously omitted. I used the Qubit 1X dsDNA HS Assay.

I submitted 8 uL of each library, which is ~half of my volumes (started with ~16 uL). I also wanted to make sure the sequencing facility would correctly pool my libraries in two batches – 1) Ctenidia+Juvenile and 2) Larvae. This is because some of my index numbers were the same in Batch 1 as in Batch 2, so they needed to be run on separate lanes. To make this very clear, I prepared 2 PCR plates, one for each batch/lane. Also, because I re-prepped a few libraries, I needed to carefully identify which to transfer, and which to omit.

Below are details for the libraries I submitted, with information such as original RNA concentration used for library prep, # PCR cycles used to amplify libraries, library concentration (DNA, from Qubit), mean library length (for a few), index number. All this information is located in this Sample-Submission-and-Info.xlsx spreadsheet.

Here is the manifest that I sent to Erica: Spencer,LH_Sample-Manifest-2020-04-17.xlsx

A note on PhiX Spike-in:

Erica asked whether I would like PhiX spike-in. Standard protocol for any Illumina platform is to do a 1% spike-in for quality control. The QuantSeq library prep manual does not specify whether it is recommended for my library type, although it does specify for QuantSeq libraries prepped using an add-on module which tack on UMIs to each library. I eailed my QuantSeq rep, and they replied quickly with the following: “For standard QuantSeq libraries without UMIs, 1% is fine. The reason libraries with UMIs need more is due to the spacer we use with the UMIs. It has a unique fingerprint that requires a more PhiX. That is the only reason. Even when labs combine non-UMI libraries with UMI libraries, they no longer need the higher percentage of PhiX. It is for UMI only libraries in a flow cell lane. It is rather specific.” So, in the end I had them use a 1% PhiX spike-in.

from The Shell Game https://ift.tt/3cGkV4U
via IFTTT

Met with Katherine and Steven a couple weeks ago and updated them on my DML, DMG, and size-associated loci (SAL) analyses. I am testing out using RMarkdown to write my results, so check out this notebook entry for a summary of these activities:

One thing I was missing was a general characterization of O. lurida methylation patterns. This is what I tackled the past couple days. To do so, I merged methylation data from all 18 samples (18 .bam files) into one .bam files, and ran that through MethylKit for some quick summary stats, then called methylation status using 50% threshold, filtered for 5x, and annotated using the O. lurida feature files. This is all posted in my RMarkdown notebook, 01b-General-Methylation-Patterns.html.

Here are barplots showing the % of methylated loci that overlap with genome features; note that I should also include a bar showing where all CpG loci are: 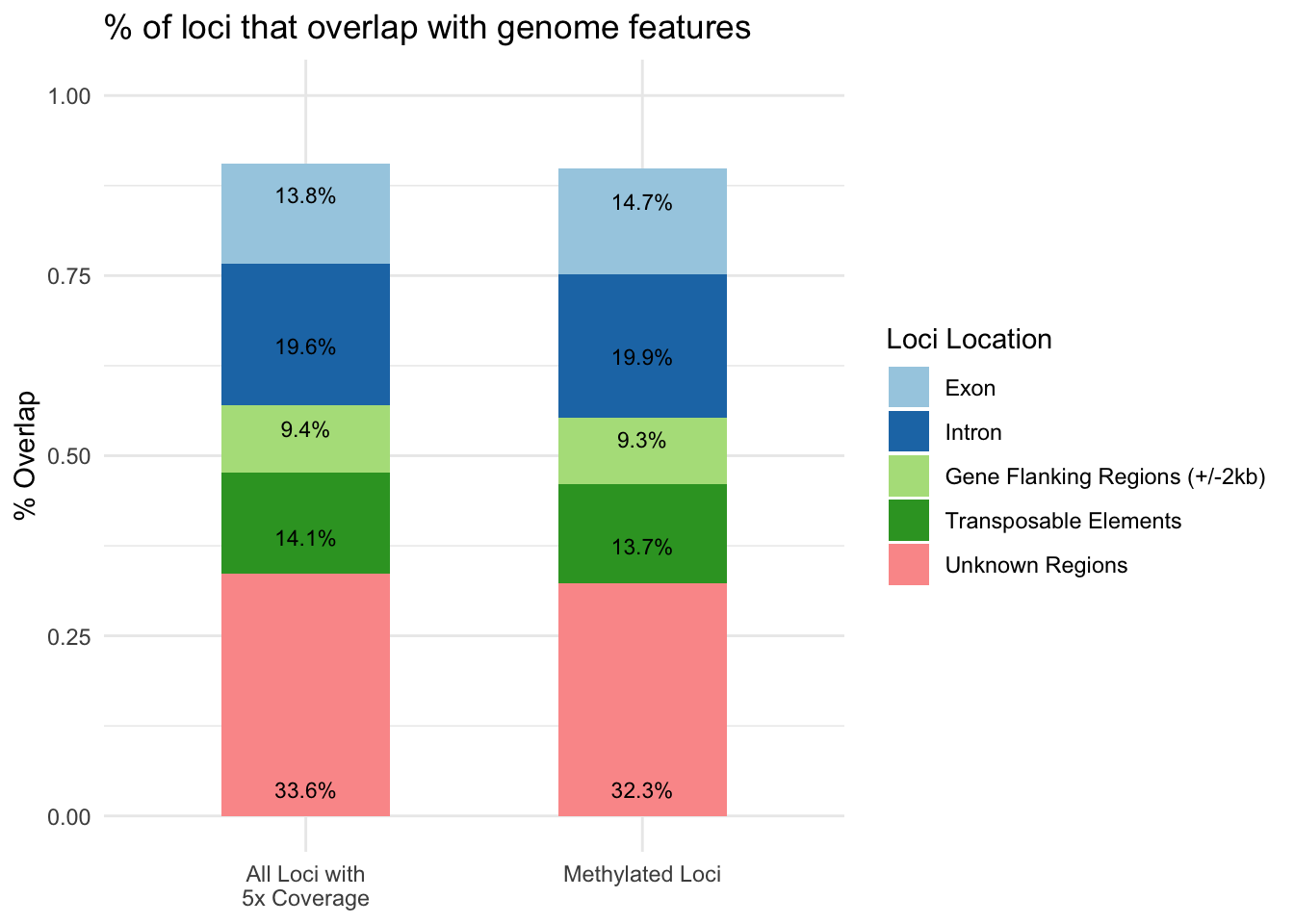 One interesting observation from this analysis is that our filtering is excluding most of the 0% methylated loci. Check out the below % methylation frequency plots:

This explains why we don’t have much 0% methylation in our data – low coverage for un-methylated loci. This may mean that our analyses omits loci where methylation is substantially different between populations (i.e. 100% vs. 0% methylated). But, can we infer that low-coverage is a result of low methylation, or just poor coverage? Will dig into this further. 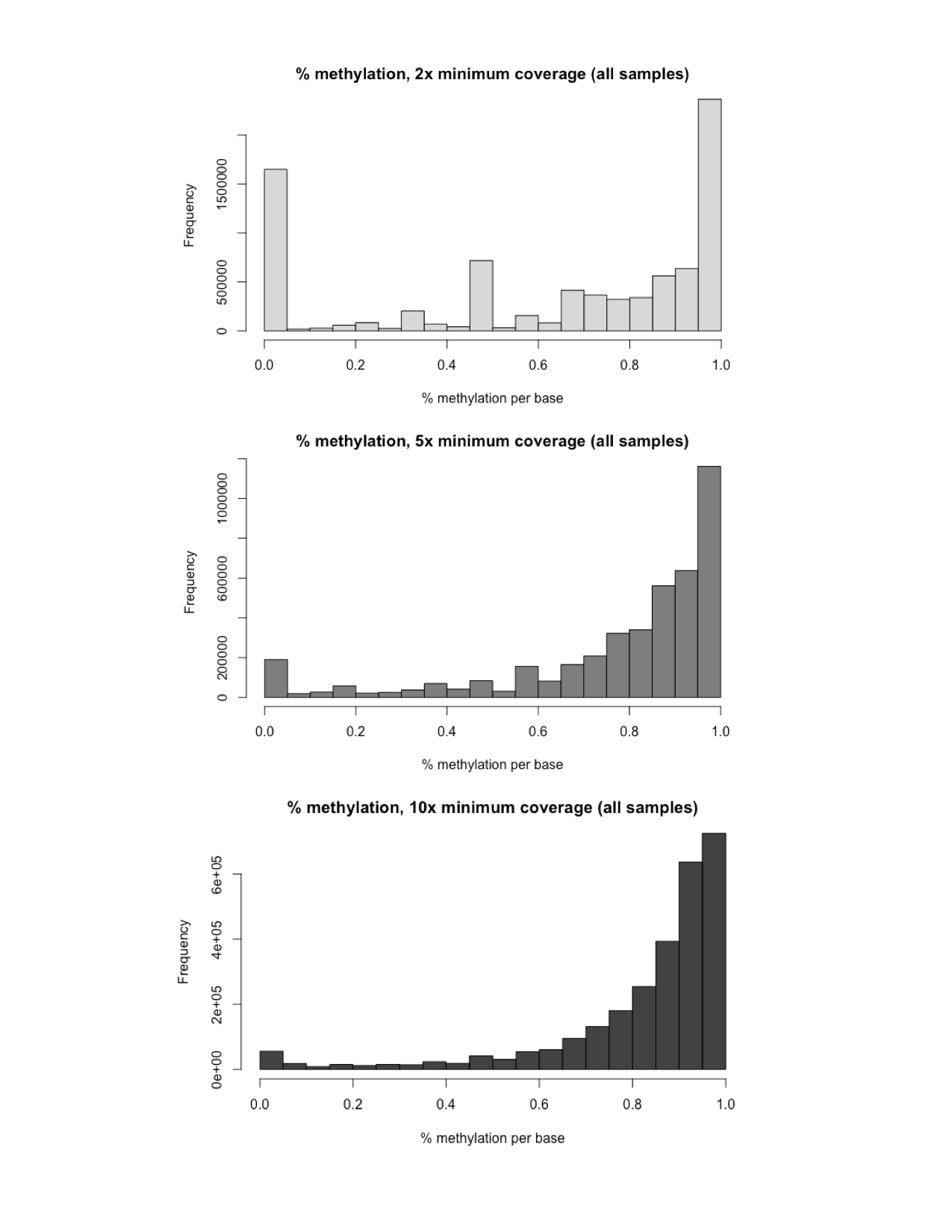 from The Shell Game https://ift.tt/2KqYEMm
via IFTTT

I’m done with my adult ctenidia & larvae libraries, and have enough kit leftover for ~17 more samples. I’ve decided to prep a few of my juvenile samples, which were collected at the end of the summer deployment. It could be very interesting to assess differences in juveniles and whether they are similar to those observed in the parents that were directly exposed.

I’m doing the whole body samples collected from the Hood Canal and Fidalgo Bay populations after they were deployed in Port Gamble Bay. I have n=4 per population and parental pH treatment (high or ambient). I had wanted to do ctenidia tissues, but then I checked out the frozen samples and noticed that they definitely are not just gill – lots of mantle tissue in there too. Therefore, I decided to do whole-body samples to try to standardize the tissue type.

Followed the RNAzol® RT RNA Isolation Reagent protocol for Total RNA isolation, using half of my homogenate, so 500 uL.

from The Shell Game https://ift.tt/38yKoe6
via IFTTT

Yikes, it’s been a few months …

Also … Met with Krista – we are a go on the internship. I will get my hands on the data as soon as it’s ready (April?). She supports me doing the NSF INTERN in Fall/Winter, so should continue pursuing that. Need to have full analysis of data by November at latest.

from The Shell Game https://ift.tt/2GJOgO1
via IFTTT

Today I identified 46 differentially methylated genes among two Olympia oyster populations, Hood Canal and South Sound. This was performed using a binomial GLM and Chi-square tests. The script was adapted from Hollie Putnam’s script (/hputnam/Geoduck_Meth/master/RAnalysis/Scripts/GM.Rmd), which may have been adopted from the Lieu et al. 2018 paper .

The analysis was performed in a RMarkdown notebook, please see that here: 09-DMG-analysis

from The Shell Game https://ift.tt/37Gk8yM
via IFTTT

Library prep is complete! However, I will need to redo many 😦 Based on Bioanalyzer results, any libraries with concentration <1.0 ng/uL will need to be re-done. Out of the total 132 samples that I prepped, 34 had concentrations that were LOW or <1.0 ng/uL (according to Qubit). That’s about a 25% incompletion rate. Here is the final inventory.

Next step – redo the 34 samples. Need to decide whether I should re-isolate RNA, or just try to re-do the library generation. This is a question for lab meeting tomorrow.

from The Shell Game https://ift.tt/2ZXDcp2
via IFTTT

The final step in the QuantSeq library prep is to amplify my cDNA libraries (using the optimal cycle number) and then purify. Finally, to assess quantity and quality of finished libraries I use the Qubit High Sensitivity DNA kit to measure cDNA concentration, and the Bioanalyzer High Sensitivity DNA chip kit to measure fragment lengths. I worked in batches based on the number of cycles needed to amplify.

IMPORTANT NOTE: I have 2 sets of indexes with the same numbers. I therefore prepped the ctenidia samples with one set, and the larvae with another set. Therefore, I SHOULD NOT run ctenidia and larval samples in the same lane (since two samples have the same index number).

The spreadsheet where I have all this information organized is in the laura-quantseq repo, file is: 2019-July_RNA-isolation-ctenidia-larvae.xlsx

This is the plate configuration of the finished libraries. Based on the quantification/Bioanalyzer results, some of these libraries will need to be re-done. However, this is an important map!

Results for samples ran for 16 cycles 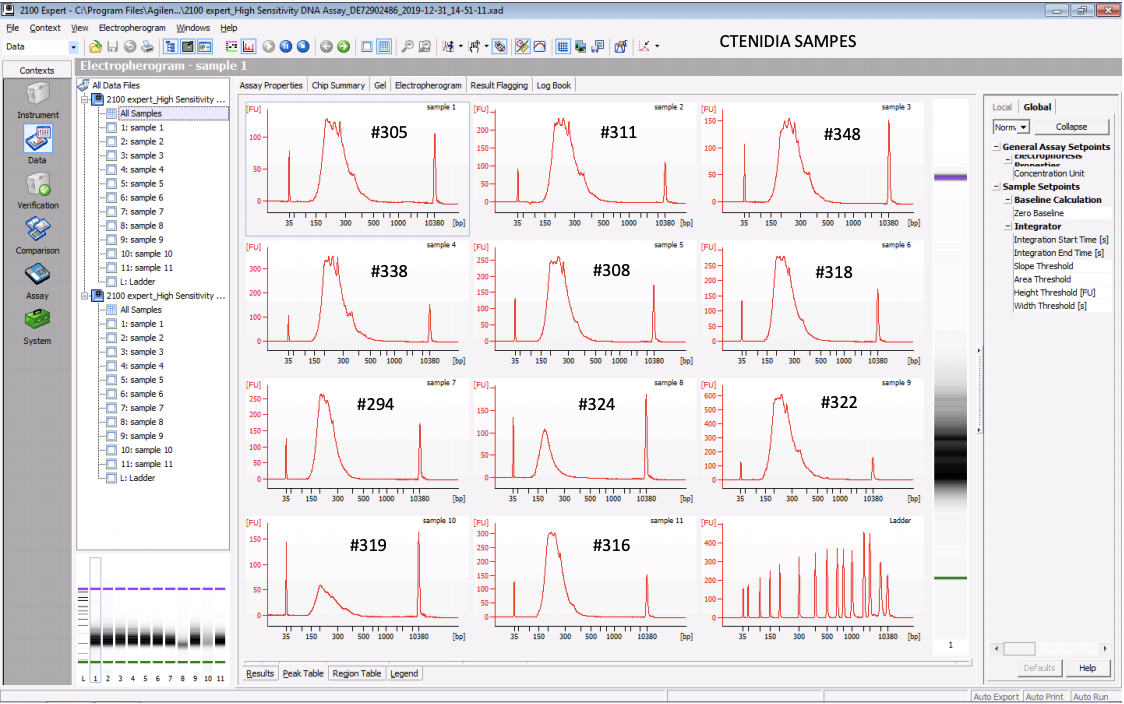 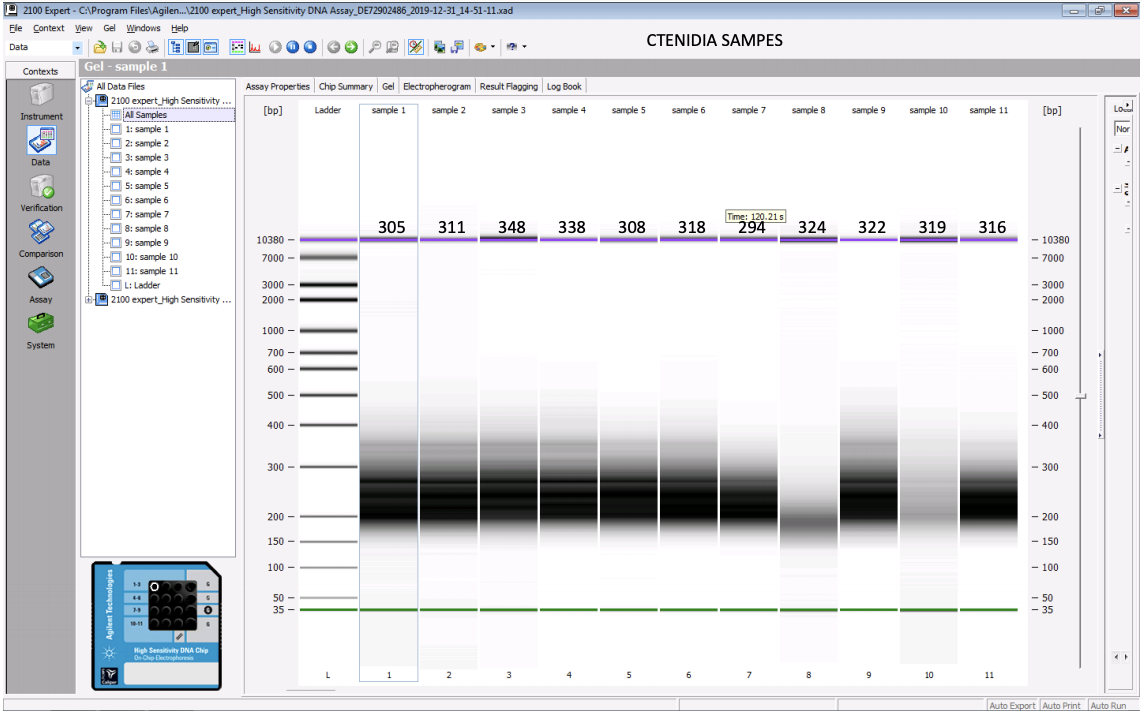 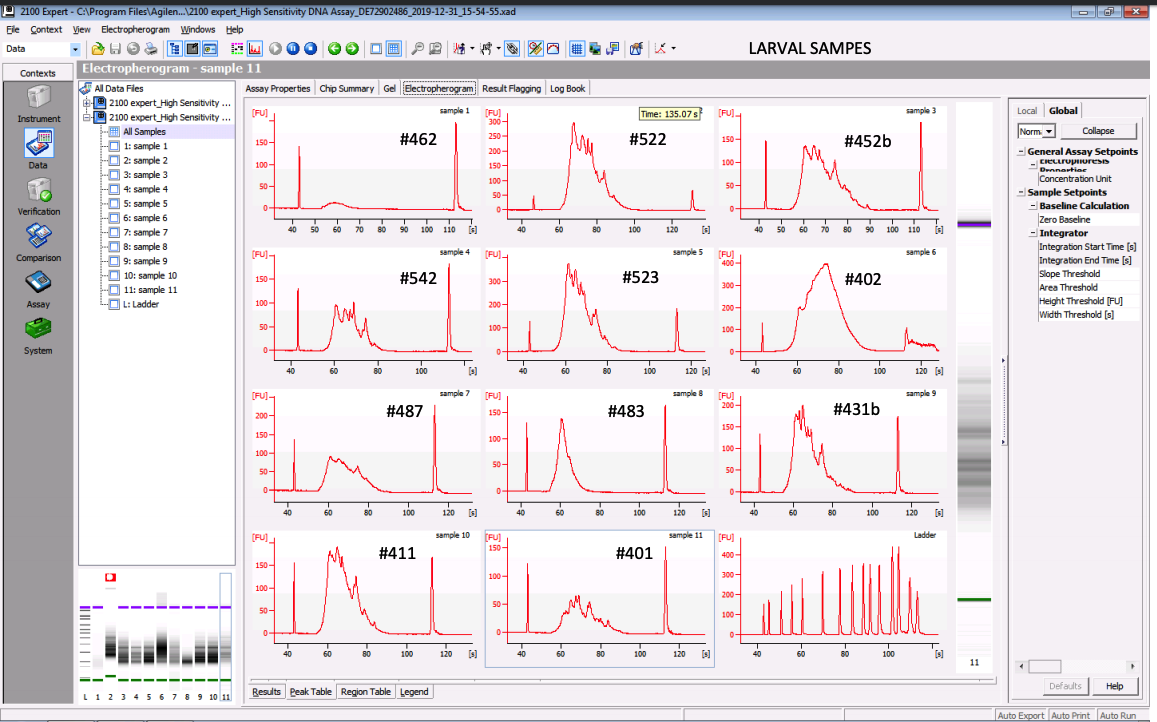 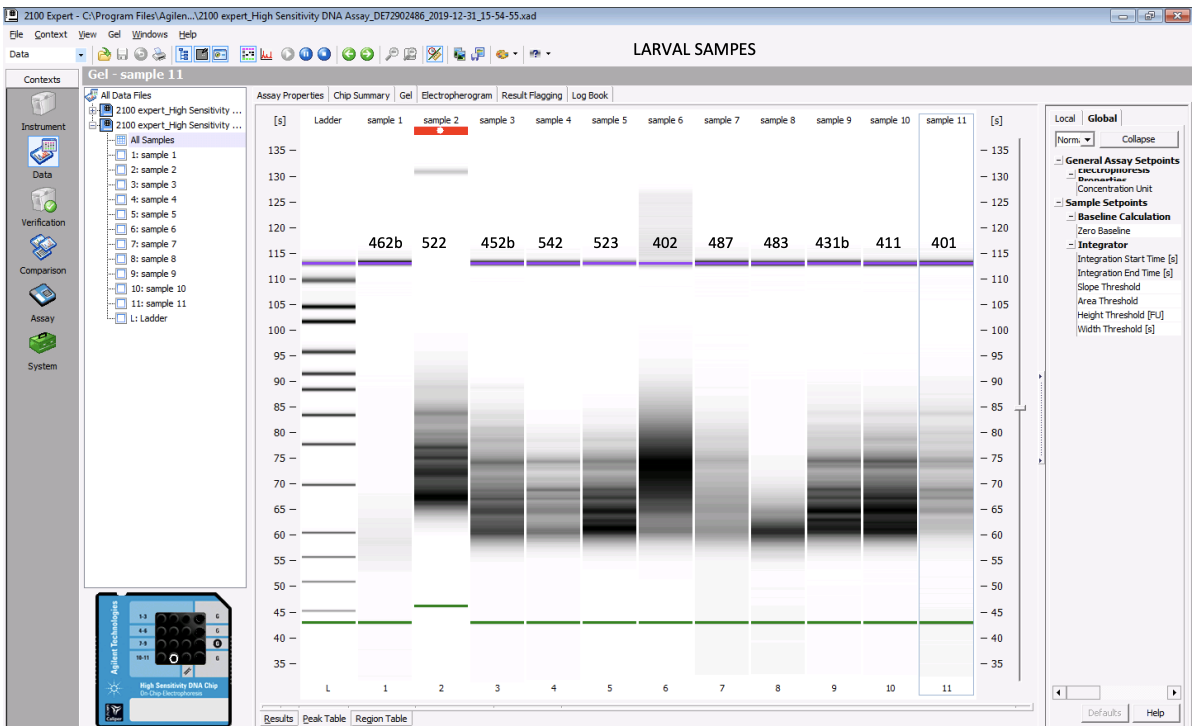 from The Shell Game https://ift.tt/2SUc217
via IFTTT